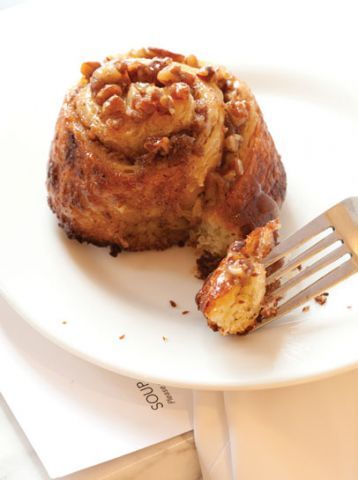 The buttery shape-shifting dough, somewhere between bread and cake, appears in local bakeries as rolls, buns and shells filled with a delicious array of the sweet and the savory.

Inès Patisserie
Nohra Belaid’s crème fraîche brioche hails straight from her home region in France and arrives as a crimped, tart-like shell with a warm crème fraîche filling that melts into the pastry (also available with seasonal fruit). $5–$5.50, Madison Park.

Macrina Bakery & Cafe
To make the ham and cheese brioche, which sells out daily, Macrina owner Leslie Mackie rolls out her brioche dough and spreads a fresh Parmesan-nutmeg béchamel sauce over it. She then adds thinly sliced ham and Gruyère cheese, and bakes to a golden crust. $4. Multiple locations, including SoDo.

Dahlia Bakery
The potato brioche with Gruyère holds tender scarlet yams, Yukon Gold potatoes, onions, and fresh herbs, all melded together and topped with Gruyère. They’re at their best served at room temperature—extra tasty with a side of tomato soup. $3.75, downtown.