By Brangien Davis and Bond Huberman

The shining stars in Seattle literature, theater, visual art and film in 2011. 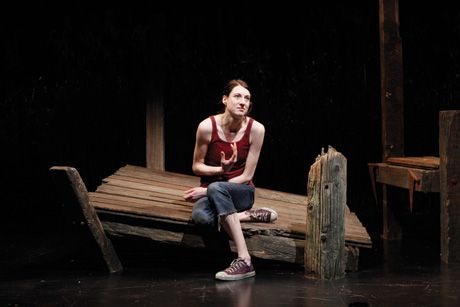 Most Innovative Approach to the Literary Journal:  Filter Sometimes, thinking outside of the box means thinking inside of a box. Jennifer Borges Foster’s hand-ornamented and hand-sewn literary journal Filter is always a thing of beauty, but for this year’s volume (the third), she went completely above and beyond the bounds of the literary journal as we know it. Foster and her team collected each of the new edition’s 215 copies of poetry, fiction, essays and visual art in a magnetized box with a gorgeous letterpress cover, and—acknowledging the fact that people rarely read journals in the intended order—left sets of pages loose, unbound. Which means readers can delight in surrounding themselves with the contents, much like kids dumping out Halloween trick-or-treat bags—and with the same sweet sense of anticipation. filterlit.blogspot.com

For approximately five years, Seattle artist Clare Johnson has drawn a picture and a few words on a sticky note in an effort to remember the subtler details from the day’s events. Twice this year she displayed (at temporary Belltown cabaret Barnstorm and later at Richard Hugo House) a huge sample of the 1,000 or so entries, called the Post-It Note Project, which looked like a compelling graphic novel in the making. Using a minimalist, witty style, Johnson transforms the tiny neon squares into vast canvases of possibility, and her poet’s ear for seizing on intimate details—the impression her hips make on the bed, or the exact moment she realized she was developing a crush on someone—makes you not want to miss a single sticky. clarejohnson.com Few actors can take on the role of a taxidermied goat and turn in a performance that’s simultaneously hilarious and heartbreaking. Michael Patten achieved the seemingly impossible last spring, in New Century Theatre Company’s (newcenturytheatrecompany.org) unforgettable production of O Lovely Glowworm, Or Scenes of Great Beauty by Glen Berger. Working with a life-size goat puppet, Patten beautifully conveyed the goat’s physical pain, his variously imagined happier life stories and the musings of his last moments—and in the process made us think about our own fated trajectories.

Acclaimed Seattle actress Renata Friedman put a positive slant on multiple personality disorder last winter with her tour de force performance in The K of D, An Urban Legend at the Seattle Rep (seattlerep.org). The Gumby-limbed Friedman transformed herself into 17 different characters—relying solely on body language and vocal changes to distinguish each—to tell playwright Laura Schellhardt’s tale of a small town entranced by the death of a teenage boy and the strange life of his surviving twin sister.

Where do old movie theaters go when they die? In Seattle, the answer involves reincarnation—at least in the last year, when two beloved old cinemas were revived by local arts organizations. The Neptune, built in the University District in 1921, gained new life last fall, thanks to STG Presents (which also runs The Moore and The Paramount; stgpresents.org), which revamped the space as a live performance venue. The Uptown, built on Queen Anne in 1926, is now an art house film venue operated year-round by Seattle International Film Festival (siff.net).

Soaring above the unfortunate loss of the Washington Film Incentive was the promising news that local filmmakers were kicking butt with new releases at big-deal film festivals. In January, Megan Griffiths’ The Off Hours premiered at the Sundance Film Festival (in one of the coveted few slots in the “Next” category, for truly low-budget films) and earned a positive review from Variety magazine. In September, Lynn Shelton’s Your Sister’s Sister premiered at the Toronto International Film Festival, where it earned accolades from the Hollywood press and was picked up for distribution by IFC Films. Way to keep Seattle in the spotlight, ladies!

It used to be that an artist’s credibility depended on having work shown in a white-box gallery. But since those settings have become fewer and farther between, artists and their supporters are finding new ways of showcasing work—take, for example, someone’s living room. In the last year, home-based galleries have popped up all over the city, including Robert Yoder’s light-filled Ravenna gallery Season (season.cz); Sierra Stinson’s tiny Capitol Hill apartment showroom Vignettes (vignettes.us); and Klara Glosova’s ever-evolving Nepo House (nepohouse.org) on Beacon Hill, where exhibits pop up in all corners.

Our favorite Seattle photographer doesn’t use the latest technology. His photos aren’t the crispest, or cleanest, or most colorful. But that’s exactly what makes his portraits so appealing. For the past two years, Daniel Carrillo has been documenting Seattle’s artistic community via gorgeous portraits taken using the “wet plate collodion” method, which was invented in 1850 and involves a giant, accordion-style camera, glass plates and extremely slow exposures. And while Carrillo (who has also shot portraits for Seattle magazine features) is hooked on this old-school approach, he doesn’t hesitate to acknowledge the new-school way his work gained acclaim: on Facebook.

#friendswithmoney
Best New Arts Financing Model: Microfunding
Given the typically microcosmic nature of art grants, it’s been refreshing to see artists make not just lemonade, but profitable lemonade stands by harnessing the power of the Internet. Thanks to digital media and crowdsourcing, Seattle artists are finding funding for projects on an as-needed basis—without the approval of official judging panels.

Nearly 200 (and counting) independent Seattle artists were funded this year at Brooklyn-based Kickstarter.com (known as “Facebook for fundraising”), raising anywhere from $400 to $190,000 per project. That’s more than double the amount of Seattle projects funded in 2010—and double what 4Culture funded in 2011. Meanwhile, Sprout Seattle (sproutseattle.org), the locally based, analog version of crowdsourcing, cooks up popular community dinners, where a sliding-scale admission fee gets you a delicious meal, an artist presentation—and a vote to determine which guest artist goes home with the evening’s proceeds in her pocket.