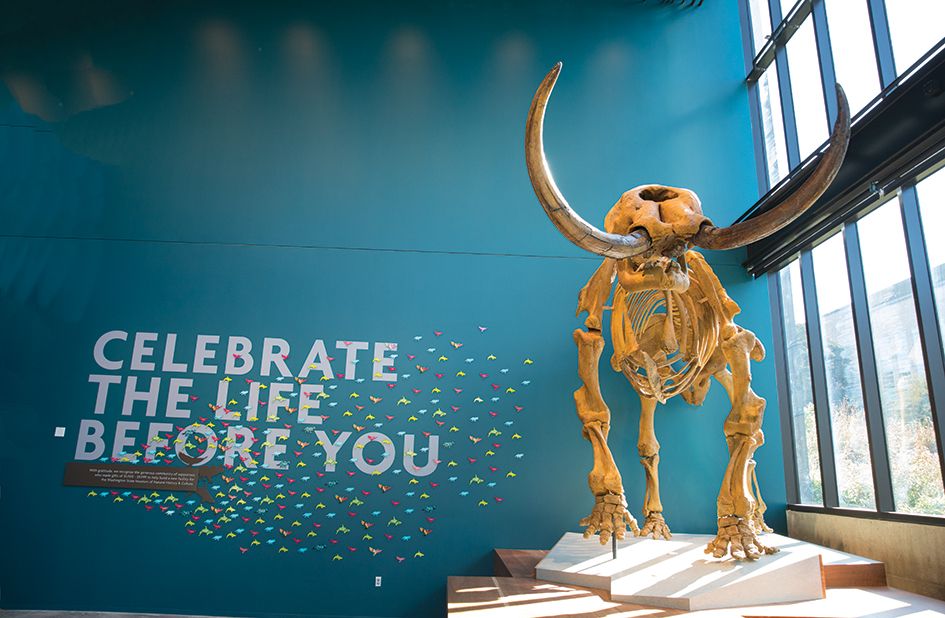 Moving the bones was the easy part. The hard part, says Burke Museum executive director Dr. Julie K. Stein, was transporting, via fallible human hands, the 2,000-year-old Cypriot glass from the old Burke Museum to its new building 400 yards away. From May 2018 through March 1, 2019, staffers of the natural history and culture museum relocated millions of objects from their collection into the airy, welcoming new space on the University of Washington campus. But for Stein, the work began much earlier. A building upgrade has been on her agenda since she became executive director in 2005; a fundraising campaign began in earnest in 2008. The $99 million project, led by architect Tom Kundig of Olson Kundig, broke ground in 2016 and opened to the public in October of this year.

The idea was huge but simple. “The vision for the new Burke was to allow everyone access that formerly only people on behind-the-scenes tours could get,” Stein said at a museum preview in September. “[So that] every day, every person could see into the collections, could see people working in the labs and the workrooms, and understand through the galleries why it was important to have these objects and to take care of them.”

Works by indigenous artists decorate the walls and honor the tribal land on which the museum sits. On-site food comes from Off the Rez Café, the first brick-and-mortar location of the popular food truck. The bulk of the space is unfussy, with high ceilings, huge windows and big open spaces. The simplicity allows flexibility, an important element for a museum with ever-evolving needs—who knows what the collection will look like in the future? Sixty percent of the new Burke is visible to the public, compared to 30% in the old space.

In 1885, a group of young naturalists, alarmed by the rapid change in our region, began collecting the objects that would coalesce as the Burke Museum. By showcasing today’s museum as the living organism that it is, the new Burke seeks to forge community connections not only to the museum but to our shared natural and cultural histories.

Arts at King Street Station formally opened in March with yəhaw̓, a radically inclusive exhibit of indigenous art, which featured work by every artist who submitted art to the show. But the space, operated by the Office of Arts & Culture, is much more than a gallery. After yəhaw̓ closed in August, the next project in the space was Tagalog sa King Street, a collection of one-act plays performed in Tagalog with English subtitles and shadow puppetry; an open rehearsal process culminated in free performances in October. In November, Ethnic Heritage Art Gallery opened a group exhibition showcasing local artists of color during Pioneer Square Art Walk.

What’s next? That’s up to you. All artist proposals are welcome—performances, screenings, workshops, readings, you name it; the flexible space can suit any medium. Arts at King Street Station was “conceived to increase opportunities for people of color to generate and present their work and to reflect and foster the creativity and talents of people that continue to create the fabric of Seattle.” No professional experience is necessary, applications are rolling, and financial support is available. What are you waiting for?