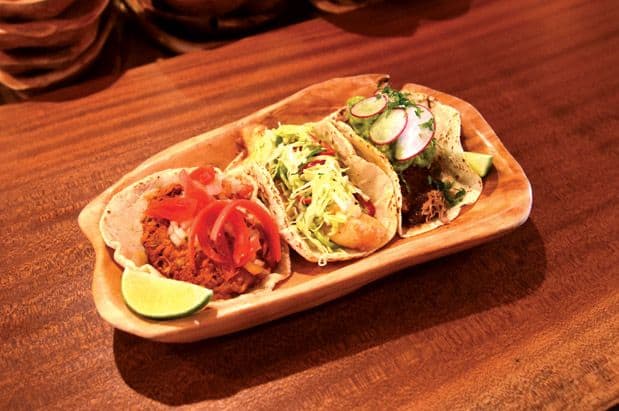 In 2012, New York restaurateur Marc Meyer tapped Chester Gerl, then chef at Matt’s in the Market, to run the kitchen at his trendy SoHo restaurant, Hundred Acres, and, eventually, to help open Rosie’s, a restaurant specializing in central and southern Mexico cuisine, in the East Village.

Now Gerl is back in Seattle, showing off his love of Mexican cooking at Ballard’s Gracia, which he opened in February. The best menu items are also the simplest: botanas (snacks) made from scratch, antojitos (little cravings), miniature tacos (two for $8), slow-cooked soups (menudo fans, rejoice) and shareable entrées, plus a short list of agave-based cocktails.

Just as Josh Henderson is doing at downtown’s Bar Noroeste, Gerl is educating Seattleites on the complexity of true Mexican food. Get this: Gerl imports heirloom varieties of corn from Oaxaca’s small-plot farmers and makes masa—the dough used to make tortillas and other dishes—in house, a laborious process that involves adding calcium oxide to the hulls to make them easier to grind.

These corns are said to have unique flavor profiles, but I couldn’t detect the differences among the tortillas. Many dishes, including four of the five antojitos—such as black beans and green chorizo ($7) and duck carnitas ($8)—followed a generic tortilla-topped-with-protein formula similar to the tacos menus. I’m afraid Gerl’s efforts with the corn may be getting lost in crema and shredded lettuce. Perhaps a brief masa primer or even tortilla tasting should be added to the menu so that his work doesn’t go unnoticed. Or, just do what we did and stick to tacos and margaritas.