The Best New Seattle Restaurants in 2019

The city's top spots to try now, for everything from salad to dessert 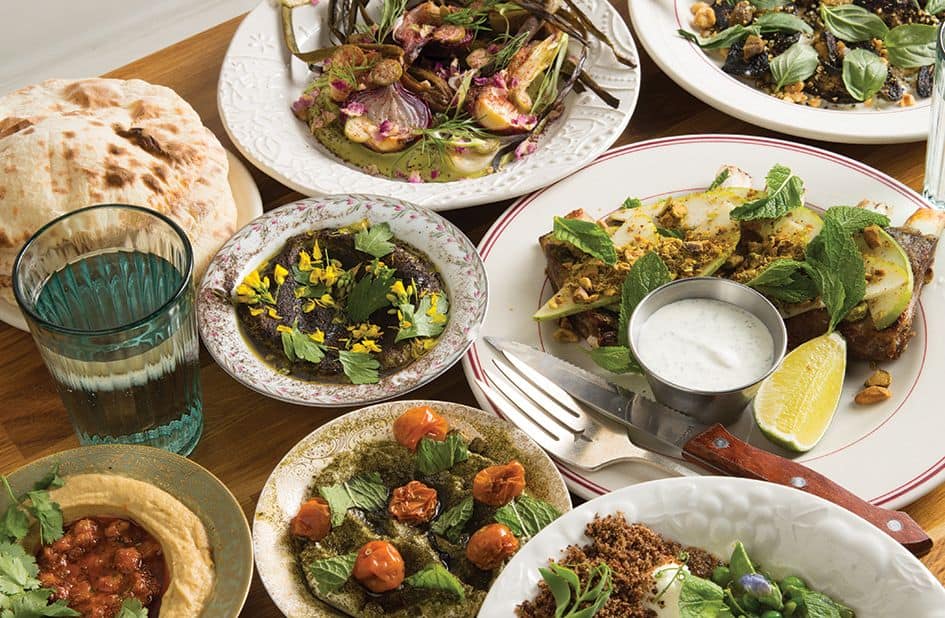 This article appears in print in the September 2019 issue and is part of our Best New Restaurants cover story. Click here to subscribe.

Homer
Beacon Hill
The fluffy pita here is simple but enchanting (much like the 50-seat restaurant itself), particularly when dragged through chef Logan Cox’s innovative Mediterranean-inspired dips, like lamb ragu over tahini ($13) or nettles with sunflower seeds and dried lime ($8). Sara Knowles, Cox’s wife and business partner, designed the space with deep blues and quirky ostrich wallpaper. The restaurant, which opened last September, centers around the wood-fired oven, giving it an atmosphere that welcomes diners without overwhelming them. Cox, formerly of Sitka & Spruce, brings the same level of comfort and delight to a menu of Middle East–meets–Northwest dishes, like morel mushroom stew ($20) and lamb ribs with Anjou pears ($19).

KNOW BEFORE YOU GO: Homer only takes reservations for parties of eight, and lines can be long, so eat dessert while you wait: Enjoy a swirl of soft serve, sold from a walk-up window, where you’ll find a rotation of fascinating flavors, such as a rhubarb-vanilla-black-pepper mix and winter pine ($7). 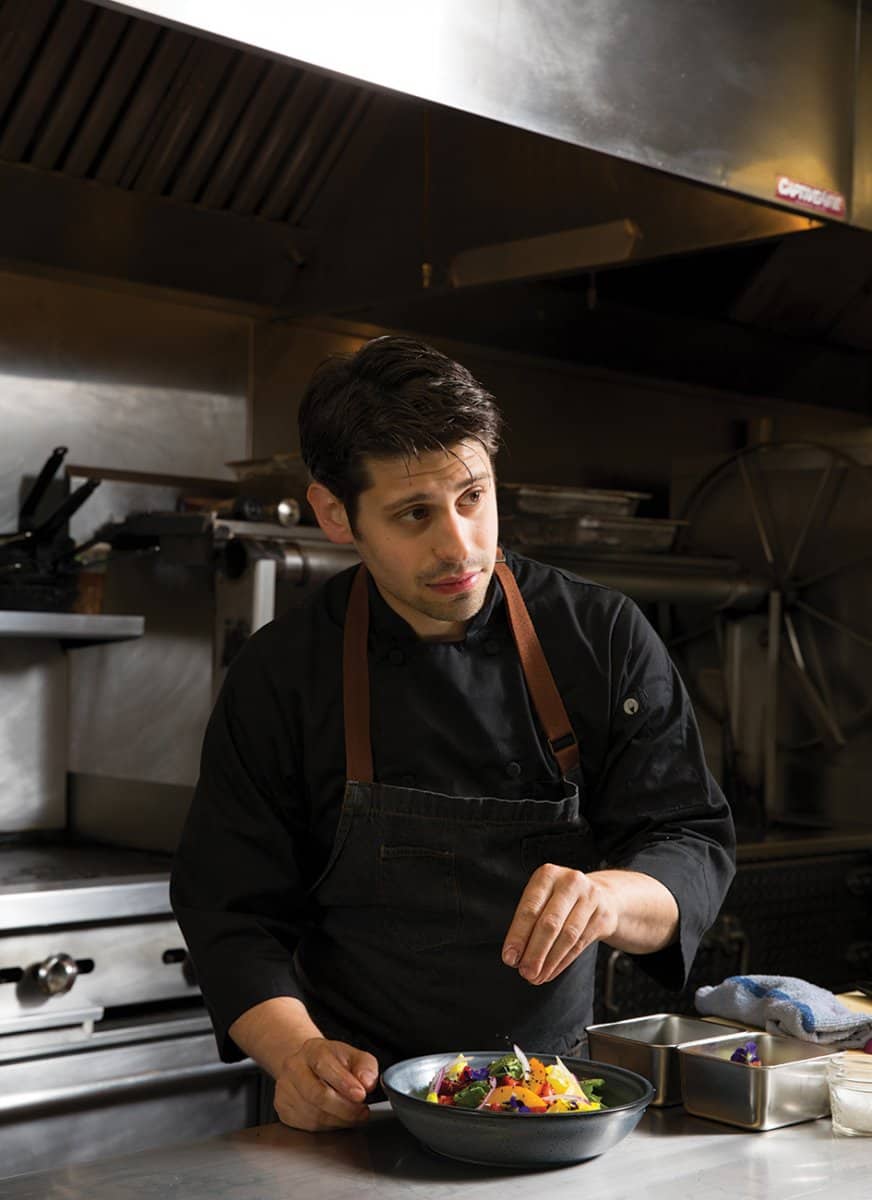 RAINBOW CONNECTION: Sawyer chef-owner Mitch Mayers has built a reputation for his refined carnival-esque fare, but his food is also fresh and incredibly colorful

Sawyer
Ballard
Every dish on chef-owner Mitch Mayers’ menu at this charming Ballard spot (open since August, 2018) seems like something dreamed up by a culinary school student with the munchies, and then executed with skill, precision and artistry. The restaurant describes itself as “new American,” but a careful eye spots influences from all over the world in dishes like udon noodles with house-made pastrami ($19) and cheesy bread with ’nduja pimento cheese ($10). In less experienced hands than those of this former Lark chef de cuisine, it could be a mess, but Mayers runs a tight ship in the enormous former sawmill space, which has been gussied up with deep turquoise accents and elegant booths. 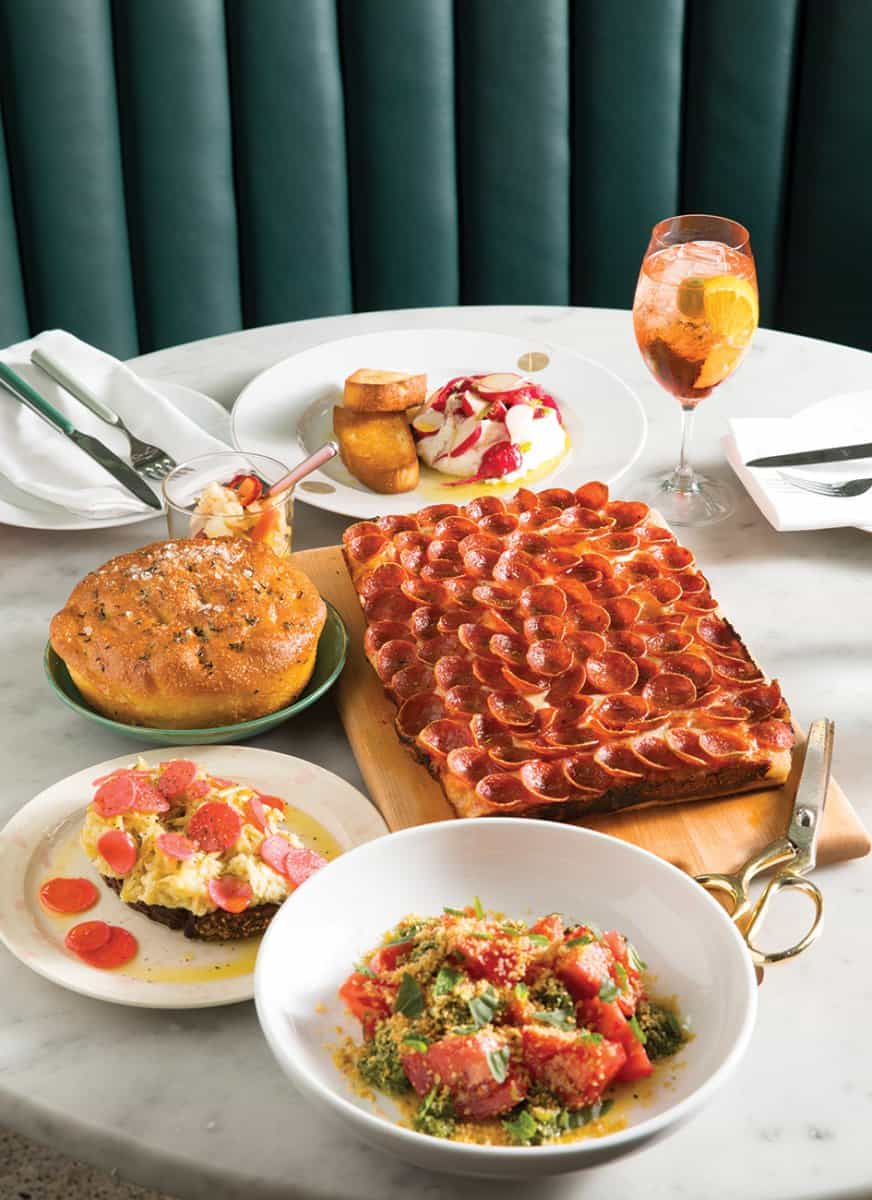 HIP TO BE SQUARE: Renowned restaurateur Renee Erickson added a number of new restaurants to her empire in the last year; most prominent is Willmott’s Ghost, best known for its Roman-style square pizzas cut with gold-handled shears

Of all the city’s top-tier restaurateurs, Renee Erickson perhaps has had the most momentous year. In July 2018, her restaurant group Sea Creatures acquired some heavy hitters from Josh Henderson’s Huxley Wallace Collective restaurant group, including Westward, the Great State Burger chain and Saint Helens Cafe. And that was just the start. One month later, she opened Deep Dive, arguably the most dramatic, awe-inspiring bar in town, thanks to the Curtis Steiner–executed decor and Erickson’s menu. Its location is quite stunning, too, situated deep inside the similarly striking Amazon Spheres. Then, in October, also in the Spheres, she opened lunch and dinner destination Willmott’s Ghost, with its pastel palette and Roman pizza served with distinctive gold-handled shears. Springtime brought the transition of Saint Helens to Bistro Shirlee, a French-inspired café (in both menu style and classic decor) named after Erickson’s mother. The first two are more worthy of a destination dinner than the third, but all are assets to their neighborhoods.

WHILE YOU’RE THERE: If you’re the planning type, line up your visit to Willmott’s Ghost and Deep Dive with a self-guided tour of the Spheres, available by reservation on select Saturdays. 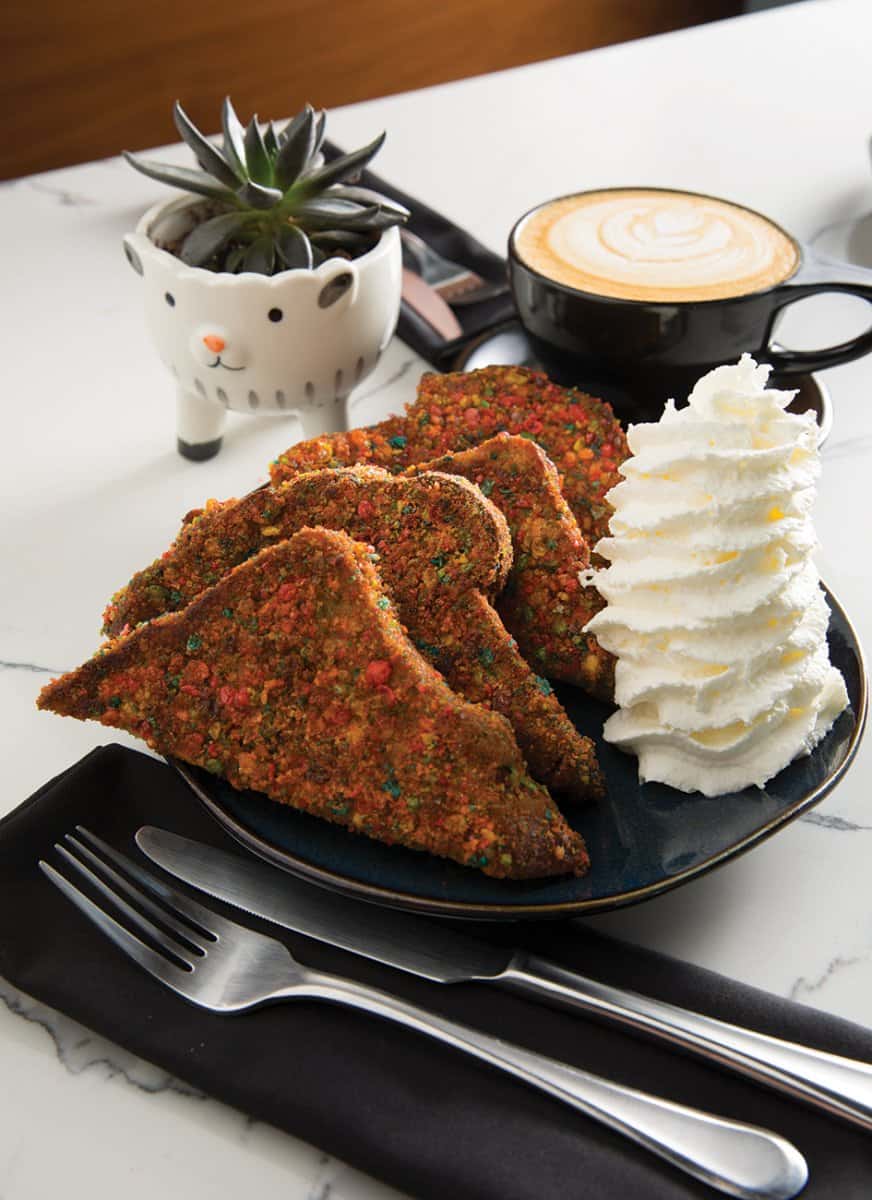 CHILDISH DELIGHT: New Ballard restaurant Watson’s Counter is a charming spot for Korean fusion food and Instagram bait like this photogenic (and delicious) plate of French toast crusted in Fruity Pebbles and served with whipped cream

Watson’s Counter
Ballard
Though much of its fame stems from the photogenic nature of its popular Fruity Pebbles–studded French toast ($7–$12), this light-filled, marble-countered daytime delight, open since February, hasn’t rested on the reputation of its eye-catching culinary mash-ups. The French toast makes for a great savory-sweet twist, much like the gochujang chicken wings on waffles ($15). Come for the wacky cuisine—which also includes Korean beef poutine ($18)—but stay for serious cooking chops.

DON’T MISS: Nearly everything on the menu goes with a side order of the house-made kimchi ($5).

Corte Fino Mexican Cuisine
Rainier Valley
Despite an awkward alley entrance, the inside of Seattle’s only halal-Mexican restaurant (open since last October) is Pinterest perfect, with succulents on floating shelves and a subway-tile-framed kitchen. It turns out Mexican cuisine without the pork lacks little (that omission and the absence of alcohol are the only discernible differences between the halal version and a more typical Mexican restaurant), with dreamily creamy lard-free beans ($2.99) and tender carne asada ($4.79). Chorizo made in-house with beef shines atop a queso fundido ($9.99) that combines the saucy Texas version and the classic melted Mexican cheese dip.

Samara
Sunset Hill
This dimly lit, intimate Sunset Hill beauty opened in a newly constructed building in February, giving the lucky residents nearby the kind of neighborhood spot we all wish would move in next door. Chef-owner Eric Anderson has a knack for cooking with fire; Samara’s menu reflects his use of both a wood-burning oven and an open hearth to add char and flavor to both veggies and proteins, from charred carrots ($13) to grilled Mangalitsa pork ($33). Pastry chef Andrew Meltzer, cofounder of Columbia City Bakery, is responsible for the excellent breads and desserts.

WHILE YOU’RE THERE: Before dinner, pop in at Baker’s, a new bar in the same block as Samara, and try one of the excellent aperitifs. 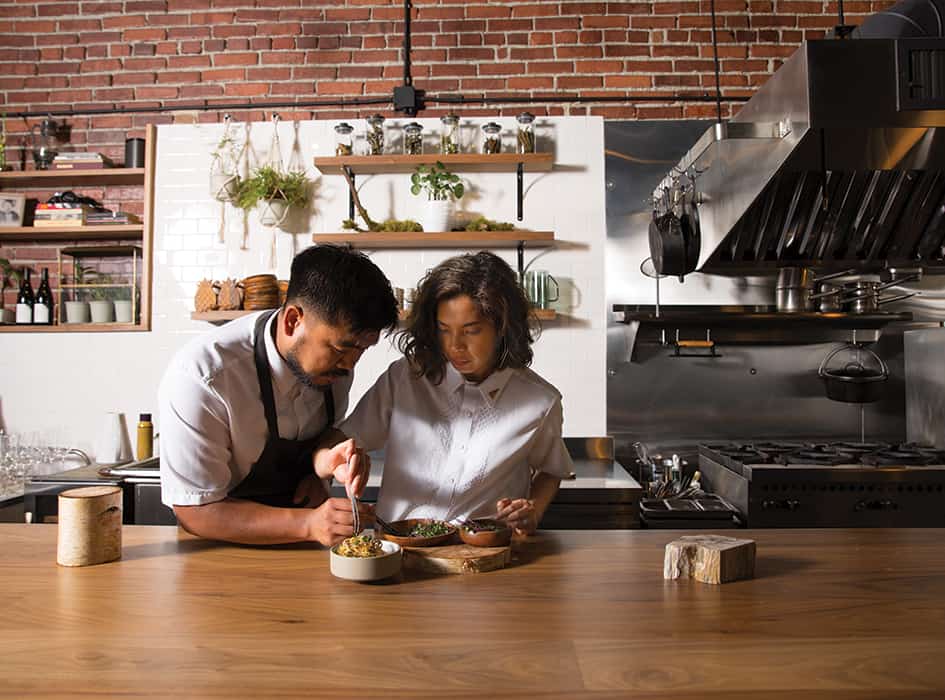 Archipelago
Hillman City
It was immediately evident when owners Amber Manuguid and chef Aaron Verzosa opened this petite Hillman City gem in December that they were breaking new ground. Rather than simply dishing out their grandparents’ recipes for adobo and kare-kare, the couple have translated Filipino flavors into a high-end tasting menu ($129) utilizing Pacific Northwest ingredients to tell a story, through food and in words during the intimate dining experience, of their experiences as Filipino-Americans here and now. It’s risky, but it works, partly because they believe in this so much that you can actually feel the love as you dine, and partly because Verzosa’s cooking—from pillowy pandesal to chewy handmade noodles to the tart, complex sinigang broth—is a joy from start to finish.

KNOW BEFORE YOU GO: There are only eight seats, all at a long counter, so reservations are required months in advance. Reservations for October and November will be available online the first week of September. 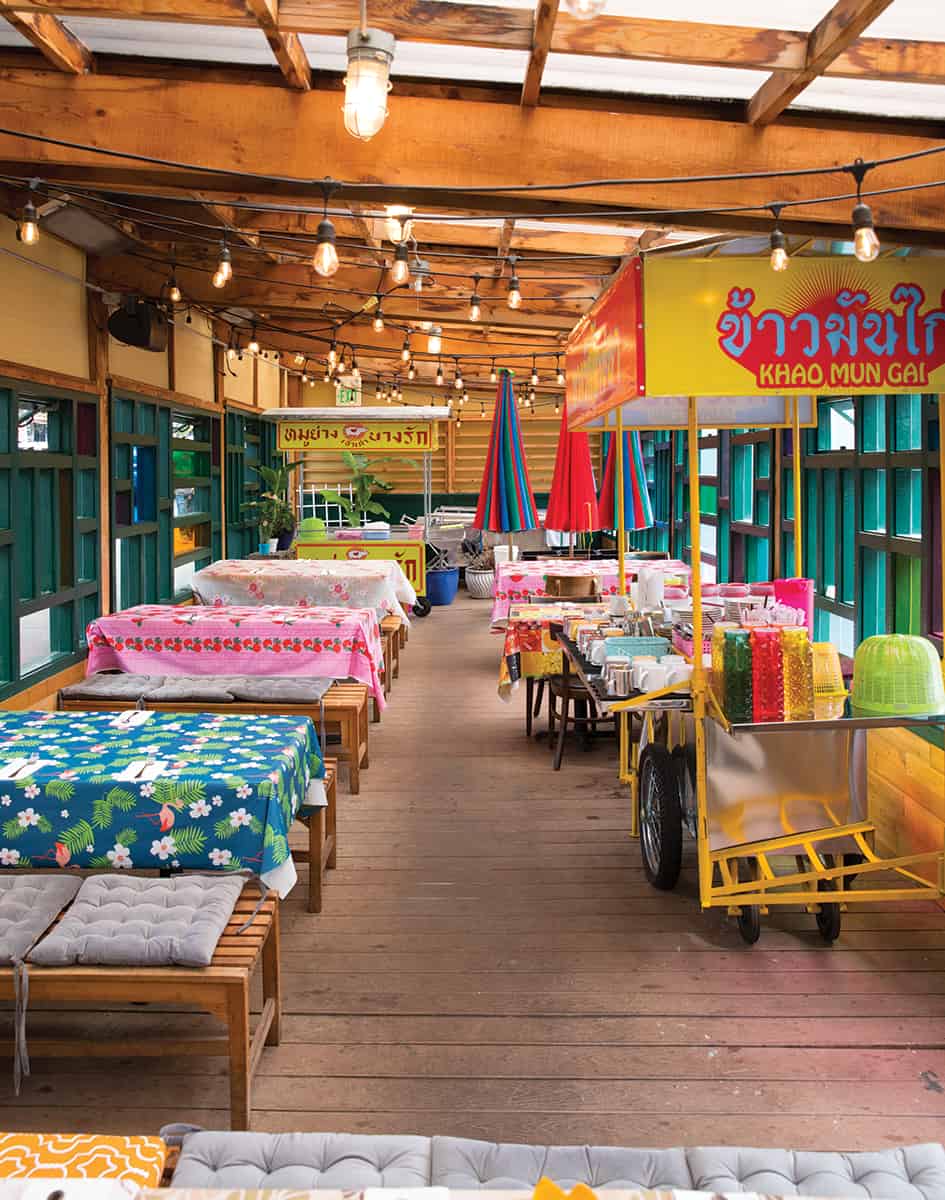 STREET EATS: Belltown’s Bangrak Market is as colorful as the menu is tasty, thanks to its Thai street-food-themed decor

Bangrak Market
Belltown
Colorful and festive, this Belltown newcomer (open since April) is decked out like a Bangkok market, with the street-food fare to match. Co-owner SangDuen Auesiriwong says she was inspired by the food—and the fun—she missed from her home country. The menu is broad and best enjoyed when shared; don’t miss the dishes from the northern part of Thailand, such as the Lao-style papaya salad ($25), Chiang Mai sausage ($12) and a hot-and-sour soup called tom zapp ($12).

EXTRAS: At press time, Auesiriwong was readying the covered sidewalk patio, adjacent to the dining room, and also preparing a street-food cart that will sell food in front of the restaurant, just as it’s done in Thailand.

Seaplane Kitchen and Bar
Kenmore
Although the aviation-themed decor is a tad over the top, as one might expect from the restaurant’s name and proximity to Lake Washington, this Kenmore darling, which has been open since November, fills a culinary niche in a rapidly expanding suburb with a kid-friendly menu and adult-friendly drinks. The Seaplane team is the same one behind Stoneburner, Rhein Haus, Poquitos and other sister restaurants, but the menu most closely resembles Stoneburner’s with its blistered pizzas (try the Seaplane, with double pepperoni, pickled serrano peppers and honey; $23), plus tasty veggies and creative cocktails.

Alcove Dining Room
Ravenna
Chef Emme Ribeiro Collins has spent the past year finding her footing at this warm communal, family-style Brazilian restaurant, which is located in the same space where her parents previously ran Tempero do Brasil for 18 years. When Alcove first opened in the summer of 2018, Collins offered ticketed, reservations-only thematic dinners, but the restaurant now welcomes walk-ins, offering an à la carte menu of traditional Brazilian favorites, like moqueca ($26), a Brazilian seafood stew, and feijoada ($38, enough for two), the country’s national dish of braised black beans and meat.

KNOW BEFORE YOU GO: Plan your visit for a Saturday, when live music turns the dining room into an exuberant display of South American sounds and dancing. 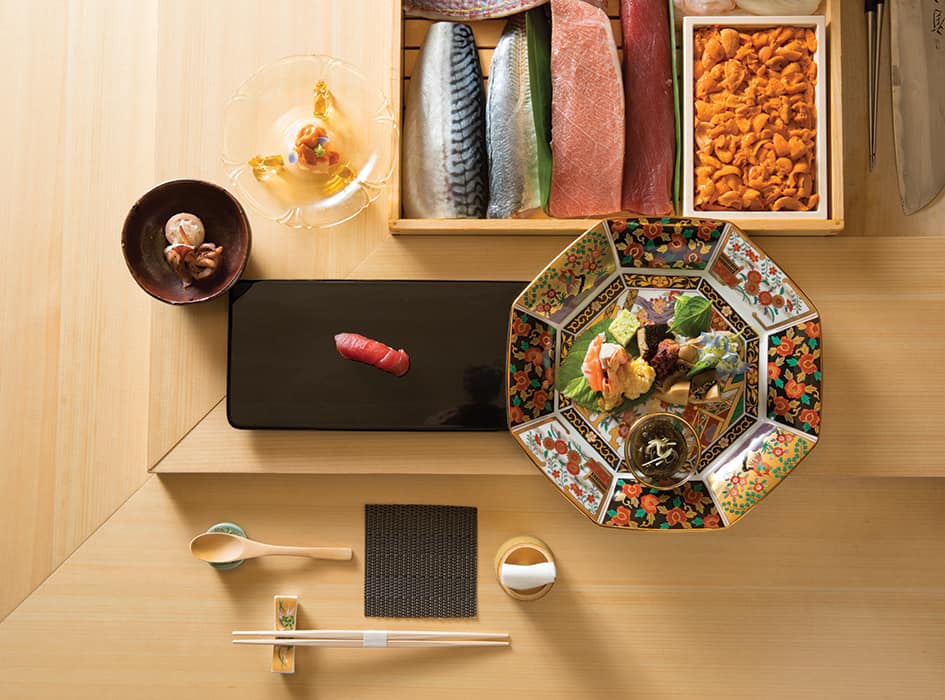 Top of the Class: 50 Best New Seattle Restaurants in 2019

It’s been a boom year for new restaurants. Here, we break down the best 50 (yes, 50!) of the bunch, plus the latest dining trends worth chewing on

From old-school burgers to handmade pastas, these lunches are worth the wait

SHAKE IT UP: Two burger joints go classic—in very different ways—with thin patties and American cheese (like on this ShackBurger from Shake Shack)

One of the biggest trends of the year is (finally!) bringing good pastrami to Seattle

BEST THING SINCE SLICED BREAD: The house-made pastrami sandwich and matzo ball soup from Zylberschtein’s Delicatessen & Bakery illustrate the best of what’s come with this increase in Jewish delis

At some of the year’s best new restaurants, dessert—for breakfast, midday or late night—is king. Check out our slideshow for our favorites