From merlots to grenaches, our picks for the very best red wines in Washington state.

By Shannon Borg and Leslie Kelly 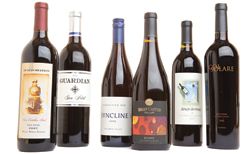 [$20 or under]
Wines of Substance 2008 Merlot, Columbia Valley, $20
You don’t need a passing grade in chemistry to appreciate the attraction of this substantial wine from a geeky cool trio of guys behind this Walla Walla–based winery: Jason Huntley and Jamie Brown from Waters Winery, and Greg Harrington from Gramercy Cellars. It comes on spicy in the glass and explodes with lush berries and black cherry on the palate.

Abeja 2007 Merlot, Columbia Valley, $38
The velvety 2007 Merlot—made by John Abbott (former Canoe Ridge vintner) from some of the state’s older vines at Sagemoor Vineyards, as well as the Gamache vineyard—is beautifully balanced, a complex coming together of ripe plums and cherries playing off a nose perfumed by mint and tobacco. TIE!
Barrage Cellars 2007 Outcast, Boushey Vineyard Yakima Valley, $35
A bright, rich Cabernet Franc with flowers and black fruit on the nose. Not surprisingly, winemaker Kevin Correll chose his fruit well from Boushey Vineyard near Grandview, our Vineyard of the Year. One judge noted the “perfume!—black plum, herbs and tea.” [$20 or under]–TIE!
Chateau Ste. Michelle 2008 Indian Wells, Columbia Valley, $18
From one of Washington’s warmer AVAs, the Wahluke Slope, this New World–style Cabernet Sauvignon (with a bit of Syrah, Malbec and Merlot) from the Woodinville powerhouse winery is a great glass for the price. Full of blackberry, dried cherry and cassis flavors, plus vanilla and smoke aromas, its mouth-filling lushness is precisely what many Washington Cabernet drinkers seek.

[over $20]
Woodward Canyon 2007 Old Vines Cabernet Sauvignon, Washington State, $79
Rick Small’s Woodward Canyon Winery in Lowden is a true Washington classic. In the Old Vines Cabernet—from the Champoux Vineyard in Prosser, containing some of the oldest vines in the state, the earliest of which were planted in 1972—our judges were impressed with its sweet fruit, cedar, dried fig and chocolate flavors, with balancing acidity and soft tannins giving it exceptional complexity and elegance. [$20 or under]
Dumas Station 2007 Cow Catcher Red, Walla Walla Valley, $19
Hello, gorgeous! This beauty from Minnick Hills Vineyard estate fruit has the backbone of a Cab, combined with the spice and softness of a Petit Verdot, making for a knockout pour. The wines are made by Doug Harvey and self-proclaimed “recovering wheat farmer“ Jay Dewitt in a historic apple-packing shed near Waitsburg. Not surprisingly, this limited release of just 281 cases has long been sold out, but the latest vintage was released in February.

[over $20]
Guardian Cellars 2007 Gun Metal, Conner Lee Vineyard, Columbia Valley, $37
Woodinville-based police officer/winemaker Jerry Riener’s blend blew away some high-powered competition with its concentrated berry flavors and dazzling finish. Flavors have plenty of time to develop and integrate, because the wine, made from Connor Lee Vineyard fruit, is aged for nearly two years in new French oak and bottle-aged for more than a year. Get this while it’s smoking hot, because only 300 cases were produced.

[over $20]
Brian Carter Cellars 2007 Byzance, Columbia Valley, $30
Brian Carter shines with southern Rhône-style blends, which typically use as many as two dozen whites, such as Viognier, Roussanne and Marsanne, and lesser-known red grapes such as Counoise and Carignan. Byzance is a blend of Grenache, Syrah and Mourvèdre, a bright, exhilarating wine with a nose of pepper, dried cherries and red raspberry, dust and cocoa. The Woodinville winemaker’s lineup of well-crafted blends fill an important niche in this state’s journey toward world-class Rhône-style wines.

[$20 or under]
Brian Carter Cellars 2007 Abracadabra, Columbia Valley, $15
This wine has the heft of much pricier bottles, a feat we attribute to the powers of veteran Woodinville winemaker Carter, who has access to some of the state’s finest fruit and maintains his sharp focus on blending those grapes. He sometimes experiments with unusual combinations and finds the strengths of each grape—such as spice, fruit or tanning—and brings out their best characteristics in the blend. Judges lauded the wine’s elegant balancing act, a lively portrait of jammy fruit and plucky acidity.

[over $20]
Col Solare 2006 Red Wine, Columbia Valley, $75
This pet project winery in Benton City makes just one wine a year: a collaboration between Chateau Ste. Michelle and Marchesi Antinori, a centuries-old Tuscan winery that introduced the concept of the super-Tuscan wine (the addition of Cabernet Sauvignon or other international varieties to classic Tuscan Sangiovese). This wine might be called a super-Washington blend of Cabernet Sauvignon, Merlot, Cabernet Franc, Petit Verdot and a bit of Syrah. Italian winemaker Marcus Notaro taps his knowledge of Italian wine to bring out the best in Washington fruit, and this is a rich, silky example of how perfect fruit and finesse in winemaking create a wine that is at the pinnacle of the craft in Washington state. [$20 or under]
Olsen Estates 2007 Syrah, Yakima Valley, $20
This stellar selection from the now-closed Prosser-based winery (though wines are available for another year or so), made with estate-grown fruit, is “stinky, but in a good way,” one judge raved. Some judges picked up on a nose packed with bits of smoky bacon, coffee and chocolate. Add Syrah’s telling characteristics of spicy fruit and the results are a wine with depth and richness. Some of those fine qualities might be attributed to 16 months of aging in French oak barrels.

[over $20]
Waters Winery 2007 Syrah, Forgotten Hills Vineyard, Walla Walla Valley, $45
This earthy Syrah is a king of the Waters lineup—or should we say queen? It is delicate but also bold, and Old World in feel with blueberry, spice, bacon, iron minerality and smoky notes. This 100 percent Syrah is grown in the Waters estate vineyard Forgotten Hills, at about 1,000 feet elevation at the foot of the Blue Mountains in Walla Walla. One judge wrote: “A pretty wine with a long finish—the best of a great flight!” A few years ago, Syrah, traditionally the star of the northern Rhône, was touted as the next big thing in Washington. Everyone planted it, everyone made it. The reality has been a slow arc of growth, but the good ones have risen above the rest. If Syrah is a star on its own, Grenache is usually in the supporting role. Around the world, however, it is one of the most planted grapes because it can thrive in heat and drought conditions. In the southern Rhône, Grenache is widely popular primarily as a blending grape, giving brightness of fruit and spice to food-friendly blends. Here in Washington, Grenache is growing, and more and more wineries are making single-varietal or Grenache-based blends to highlight the medium body and lovely fruit of the heat-loving grape. Because of Washington’s long growing season, this late-ripening grape is finding a home—and plenty of fans. This category, last year’s Best Emerging Varietal, was open for submissions by any winery. Wines listed here are our judges’ five favorites.