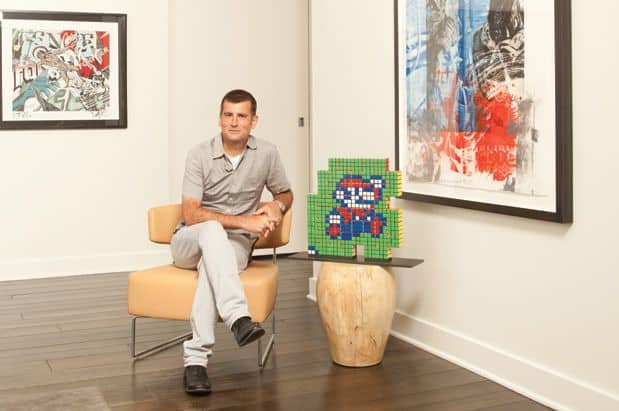 Bill Predmore’s street art collection started with a Shepard Fairey print, gifted to him by an employee long before the iconic Obama “Hope” poster skyrocketed the artist into ubiquity. Since then, Predmore—founder and president of Pop, a Seattle-based digital agency—has maintained his interest in art intended to grab attention in an urban environment, collecting the work of neo-Pop and street artists who use contemporary culture as fodder for satire and good fun.

URBAN INSPIRATION Much of Predmore’s collection is spread over the two floors comprising Pop’s luxe headquarters, just above The 5th Avenue Theatre downtown. Most of the walls inside the mod space are glass or dry-erase board, but where there’s drywall, there’s art, including mixed media and sculpture by the elusive French artist Invader; frenzied collages by Brooklyn street art duo Faile; and more multimedia prints by Fairey. Stressing creativity and collaboration as core company values, Predmore thinks of the artwork as added inspiration for employees.

CONTEMPORARY COSTS LESS Predmore, 42, has always loved 1960s Pop Art—he named his company after it—especially work by Roy Lichtenstein, known for his primary-colored comic-book panels. Unfortunately, you need at least a spare $40 million to collect at that level, so Predmore focuses on contemporary street art, which is more affordable, and which he thinks goes one step further in achieving the raw, authentic quality that he appreciates so much in Pop Art.

PLAYFULNESS OVER PRETENSE Pop culture, politics and humor are recurring themes among the artists whose work Predmore collects most, including Robbie Conal, Richard Serra, Faile and Takashi Murakami. He appreciates pieces with all the playfulness and none of the pretense that can be associated with art collecting. Like the original Pop artists, Predmore’s favorite artists play with familiar imagery. Kubrick film stills, Super Mario Bros. characters, political candidates and the Apple logo are all fair game for visual skewering—or maybe just a nudge and a wink.

( FIND IT ) Predmore collects from galleries in New York or Los Angeles and also buys directly from artists’ websites and eBay. Street art can be hard to source locally, but try galleries such as Vermillion (vermillionseattle.com) and Flatcolor (flatcolor.myshopify.com). Shown above (from left): detail of a collage by Faile (faile.net); a Rubik’s Cube sculpture by Invader (space-invaders.com) and a print by pop art icon Robert Rauschenberg.