If we could create our dream box of chocolates, these 10 local treats would be in it. 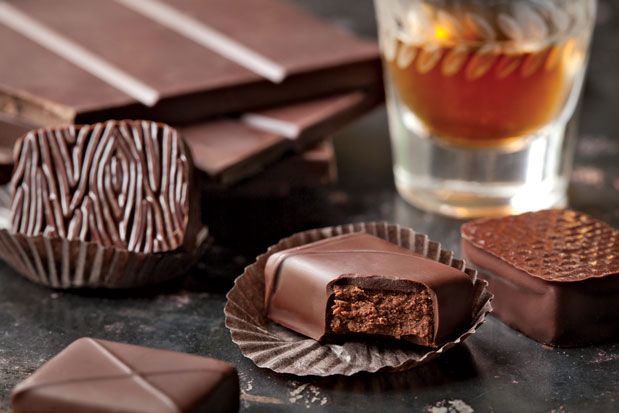 Chocolate grows on trees, but after testing and tasting everything Theobroma cacao, we’ve learned one thing: Not all chocolate is created equal. It’s all made from seeds from a football-shaped fruit that grows in the globe’s equatorial regions. But everything from where it’s grown to how it’s made affects taste and quality—and some chocolate treats are just better than others. We took the liberty of hunting down the ultimate Seattle bucket list for the chocoholic.

Brugge Chocolates
Praline Feuilleté
Susan Walukiewicz’s elegant and pretty Redmond shop is gorgeously full of equally elegant European-style truffles and chocolates in signature flavors such as strawberry balsamic and Lemoncello. We’re quite partial, however, to the giddy delight we feel when we bite into her praline feuilleté (pronounced foy-yeh-TAY), a delicately layered chocolate-and-wafer confection that can be described as an extremely sophisticated Kit Kat bar. $2 each, $23 box of 12. >> Redmond, 15946 Redmond Way, Suite 103; 425.882.4722; bruggechocolates.com

Indi Chocolate
Dark Chocolate Thins
The word may be overused, but founder Erin Andrews’ tiny Sammamish-based chocolate company is just that—indie, because she’s venturing out on her own to source sustainably grown chocolate from small farms without a big team (or big money) to back her. Her little dark chocolate thins, made of 70 percent Honduran chocolate (she sources her beans directly from growers with sustainable practices) are the perfect pillow pal, if you’re the type who leaves chocolates out for guests. (In which case, we’re coming over.) $8 for a 1.75-ounce box. >> Indi’s new Pike Place Market store, 1501 Pike Place, No. 527; 425.753.3703; indichocolate.com George Paul Chocolates
Bittersweet Chocolate Bar with Habañero and Pineapple (shown, above)
Brothers George and Marcos Trejo recently opened a chocolate shop near Green Lake, selling their own truffles and bars, plus Stumptown coffee and Snoqualmie ice cream. We’re thrilled—their unique treats, such as the dark chocolate bar spiked with habañero and pineapple (sounds odd, but it’s a perfect blend), will be easier to find. They also get our vote for most beautiful chocolate bar. With hunks of dried pineapple floating in a sea of perfectly tempered chocolate, all laid bare beneath a crystal clear wrapping, just looking at one almost feels indecent. $8. >> Green Lake, 409 NE 70th St.; 425.298.3144; georgepaulchocolates.com

Theo Chocolate
Congo Vanilla Nib Dark Chocolate Bar and Theo’s Scotch Ganache (shown, top)
We love Fremont-based Theo’s ethical approach to chocolate. Its newly released series, for which the do-good company sources everything from cacao to vanilla to chiles from eastern Congo in support of organic farmers there, brings new flavors to its line. Congolese chocolate is less bitter than most, meaning that this 65 percent cacao bar, loaded with a sweeter-than-usual vanilla and crunchy cacao nibs, is one even milk chocolate devotees might love. On the other side of the spectrum, Theo’s Scotch ganache confection (the company’s name for what most people consider chocolate truffles)—especially the one made with 12-year-old Oban Scotch whiskey blended with cream and honey—is a bracing bite if there ever was one. $2 each. >> Fremont, 3400 Phinney Ave. N; 206.632.5100; theochocolate.com Fran’s Chocolates
Chocolate-covered Blenheim Apricots (shown, right)
Three years into her 30-year tenure, Seattle chocolate maven Fran Bigelow began making her infamous figs—dried Calimyrnas plumped until almost exploding with chocolate ganache. They’re fantastic, we agree. But more than those figs, or the milk-chocolate-covered smoked salt caramels, or her Gold Bars, we love Fran’s chocolate-covered apricots. The Blenheim apricot variety she uses, once dried, tastes like the essence of 10,000 apricots. Coated with her signature 64 percent dark chocolate, a proprietary blend made for her company by Valrhona, they’re the cream of the fruit-covered chocolate crop. $3.25 each, $35 for a box of 12. >> Multiple locations; franschocolates.com

Pink Peony Chocolates
Marzipan and Mint Confections
What, you don’t like marzipan? We didn’t think we did either—until we tasted this Bainbridge Island mom-and-pop’s confection version of the traditional sweet almond paste, made with ground almonds mixed with crunchy sugar crystals, then enrobed in bittersweet chocolate. Not a touch of cloying sweetness—just something the size of a pingpong ball that might change your mind about marzipan forever. Pink Peony’s mint confection—made with a sinus-clearing combination of mint tea, leaves and oil—was the standout among all the mint varieties we tried. $2.75–$3 each. >> Available at Chocolate Box, 108 Pine St., 206.443.3900; and other area retailers; pinkpeonychocolates.com (not available online) Cadeaux Chocolates
Fleur de Sel Caramel (shown, above)
We like Cadeaux’s dark-chocolate-covered salted caramels more than any we tried—by a mile. The caramel itself is chewy without being sticky and loaded with Madagascar vanilla beans. Ballard-based owner Janet Shimada forms and dips each chocolate by hand, making the caramel in a 3-quart copper pot. Maybe that’s why the touch of salt seems restrained, compared to similar specimens. We think it’s just right. $12 for box of five. >> Available at local grocers, including Ballard Market, Metropolitan Market and some Whole Foods stores; 206.310.5387; cadeauxchocolates.com

Lesley’s Gourmet
Chile Soft Caramel
Eastside-based chocolatier Lesley Clapham makes, among other confections, salted caramels—name the salt, she’s put it on top. Strangely, our favorite nibble was her heart-shaped, chile-spiked soft caramel (made only for the Valentine’s Day holiday). Thanks to organic African bird’s eye chiles, there’s a good burst of spice at the front that mellows out as the sweet, smooth caramel takes over. $2.75 each, $19.50 for box of six. >> Available at area retailers, including Chocolate Box, 106 Pine St.; lesleysgourmet.com

Bakery Nouveau’s Confections
Score one for winter in Seattle: It’s only during the cooler months, from early October until around Mother’s Day, that chef/pastry master William Leaman dons his chocolatier cap at his astoundingly awesome West Seattle bakery to craft some of the city’s most divine handmade confections. His dark chocolate (between 65 and 72 percent, depending on the batch) rocher with delicately toasted slivers of candied almonds and the oh-so-silky texture of his phenomenal ganaches may be just about the only reason we wouldn’t mind if summer waited a little longer to arrive. $1.25 each. >> 4737 California Ave. SW; 206.923.0534; bakerynouveau.com (not available online)