The burgers and fries underwhelm at this new Pike Street joint. 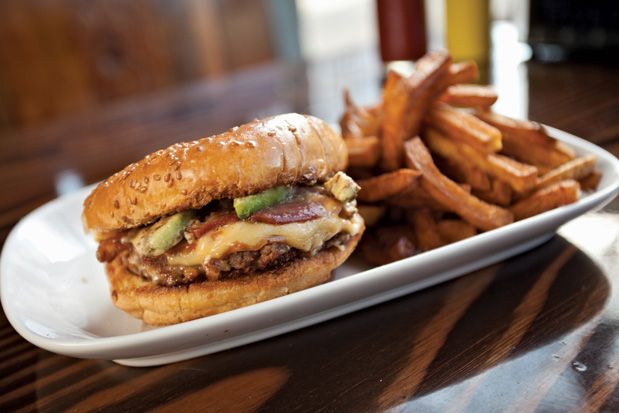 If, going in, you knew that Sam’s was named for the original Red Robin—which was first called Sam’s Tavern, then Sam’s Red Robin before the owners dropped the “Sam”—and that it is owned by the son of one of the first Red Robin franchisees, you’d likely expect a pretty impressive burger. But at James Snyder’s new Pike Street joint (opened where the short-lived Chino’s once stood), you’d likely leave disappointed. Burgers here—including the fat-loaded 50/50 ($10), made with equal parts American Kobe and smoked bacon—are inconsistent. Some show the telltale signs of meat that’s overworked—the burgers seize up, shrink and are tough. Others have a crumbly texture that falls apart. The steak fries are fine, if a bit limp, and are served with Sam’s “secret sauce,” which tastes like ranch dressing with lots of raw oregano. On a busy Friday night, you’ll likely have to elbow through a rowdy group of dudes doing shots at the bar (no table service) to shout your order over the dated Eminem blaring from the speakers. The upside? A (let’s hope) shorter line for Quinn’s consistently killer burger across the street.