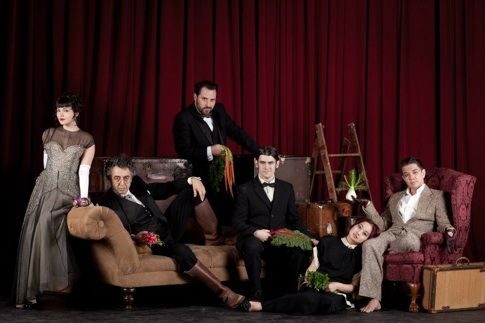 Wending through the creaky, unlit passages that served as intermissions during the nearly four-hour long Café Nordo’s Cabinet of Curiosities “show”, I couldn’t stop thinking about Stanley Kubrick’s The Shining.

Not the gory, traumatizing moments in the movie (I still get chills around long stretches of patterned carpet)—but, specifically, the scene where Jack Nicholson’s character orders a cocktail in the midst of a lively (and hallucinated) party. Before the murder conspiracy unfolds, everything at that party is a golden glow of chandeliers and champagne. The furniture is as glamorous as the revelers’ vintage fashion and everyone is “partying hardy.”

The scene is crucial because it is the story’s last bastion of hope: things from that point could turn around; Jack might not try to kill everyone. It depends on the choice he makes in that scene.

The latest installment of Café Nordo—a wild dinner/theater experience that has taken over historic Washington Hall until June 17 – gives off a similar feeling.

Inside “the cabinet,” also described as “imagination itself”, rotating groups of guests led by dapper guides enter a series of different rooms where actors, writers, chefs, musicians and artists have conspired to present a series of three-dimensional “arguments.”

Similar to Nordo’s last piece, To Savor Tomorrow, those arguments add up to a loud and clear manifesto on how our mainstream modern approach to food is…missing the point. We have a choice to fix it, but it’s unclear if we’re choosing right.

A few moments feel like propaganda—stop consuming and occupy a vegetable garden!—but, thankfully, artful hands intervene. The “message” gives way to an imaginative experience due to lovely work by a motley crew of characters that speak as if they have seen the trials of history first-hand and like they don’t always act with the best intentions.

These people talk to plants; they are plants; they are, literally, head over heels in love with the finer arts of cooking. They conduct sorcery (seriously, you’ve never been this impressed by parsley); compose music and commit unspeakable acts – all at your table. They dance and sing and joke; and the performance caliber is such that they’re entertaining even when they’re not speaking at all.

As they serve up all of this, along with delicious portions of fennel salad, celeriac soup, tasty wine and more, the hosts steadily reveal where we really are: not in a theater, but an actual place where the hunger for flavor, spice and aroma has been drowned out. Our sense of smell has grown dull – and the taste for fresh ingredients has all but faded away.

They have uplifting tales to tell, too, about barbarous Roman times, Gertrude Stein’s apartment and when the military invaded the kitchen. They entertain as they educate; they play as they admonish and with an astounding commitment to detail – the Nordo team sustains an electric ambience throughout the entire four hours that only happens when audiences truly have no idea what is coming next.

For that reason, I won’t give too much more away, except to say: among a crew of many diverse talents, a few highlights emerged: Aimee Bruneau (the healer), Max Davis (Bartholomew), Evan Mosher (Turtle) and Sachi Mikawa’s (Myrtle) give brilliant performances; Dayton Allemann’s projections capture the heart and, as always, Mandy Greer’s crocheted creatures inspire.

The “tour guide” of my group opening night, played by Devin Bannon, deserves a special acknowledgement. His haunting poise and eloquent delivery of the full history of the cabinet perfectly prepped me for the weirdness—and wonder—that soon ensued.

Writers/directors Erin Brindley and Terry Podgorski have concocted something that gives you more in an evening you could ever possibly finish in one bite. It’s a marvelous, maddening feast of creativity you’d be a fool to miss.

Because, if you live by an overwrought work schedule (the kind that barely allows enough time to heat a prefab meal all the way through to the center), you may be familiar with that niggling sense that, sure, we are surviving. But things aren’t as they should be.

Luckily, Café Nordo is here to sit us down at a humble table and help us remember: without the simplest ingredients (good food, good company, good ideas), we might all go a little crazy.

Shows that will get you on your feet