The local couple is on a mission to commission new work by Seattle artists. 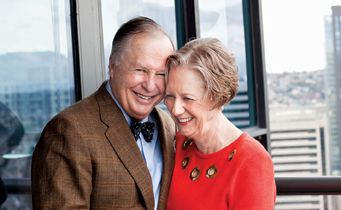 This article originally appeared in the June 2011 issue of Seattle Magazine.

Charlie and Benita Staadecker should come with a warning label: Contact with contents may result in channeling all your discretionary income into funding artistic projects. As endearing as they are enthusiastic, the Seattle couple is out to prove that commissioning art isn’t just for Vanderbilts and Guggenheims—it’s actually within reach for “ordinary people”—and it may be the single most satisfying and lasting way to spend money. As Charlie puts it, “You can choose to buy a new car, or throw a big anniversary party, or pay for a legacy work of art. What footprints do you leave in the sand?”

Born and raised in Seattle—he went to Franklin High School, then on to Wharton and Cornell; she went to Cleveland High School and the University of Washington—the Staadeckers are perhaps the most approachable arts philanthropists you’ll ever meet. They live downtown (where Charlie has run his real estate business since 1984), regularly walk to arts events and take the bus home. Charlie, 68, refers to Benita, 64, as “my Gracie,” as in Gracie Allen, and indeed the couple’s quick, funny banter recalls the sweet on-screen patter of George Burns and his wife.

Their adoration for each other played a part in their first foray into performance commissioning. Searching for a “major” gift to give Benita for her 60th birthday, Charlie happened to meet a local woman, Sandra Crowder, who had commissioned a tuba concerto from the Seattle Symphony in memory of her husband. Charlie latched onto the idea and brought it to ACT theater (the Staadeckers are longtime supporters), and artistic director Kurt Beattie liked it so much he hired award-winning playwright Steven Dietz to pen the work.

In the days of Italy’s Medicis, arts commissioners loomed large over what the end product would look like. But this wasn’t the case at ACT—Dietz and Beattie made clear there could be no creative strings attached. The only request Charlie made was for a play that wasn’t “dark.” He had no idea whether his birthday surprise would turn out to be all that he’d hoped or an awkward evening. As Benita points out, “When you commission art, you’re taking a leap of faith.” Charlie adds, “You step off the edge of a cliff and hope your parachute opens.”

In this case, the parachute not only opened, it lifted the Staadeckers into a whole new way of experiencing art. The comedic play, Becky’s New Car, was critically acclaimed (not to mention, Benita says, the best present she has ever received). Since its 2008 world premiere at ACT, it has been produced professionally in 14 other cities and is scheduled in six more through spring 2012. Like proud parents, the Staadeckers travel to every opening night, and rejoice in meeting each new director and cast. A cherished autograph book charts their travels. If it weren’t for Becky’s New Car, Benita says, “We would never have gone down the roads we’ve taken.” Charlie still feels amazed. “It’s expanded our lives tremendously,” he says. “We are so grateful.”

Not surprisingly, the Staadeckers have become hooked on commissioning. In fact, before Becky’s New Car even hit the stage, Charlie contacted the Seattle Symphony in hopes of commissioning a concerto to celebrate the couple’s 25th anniversary. Maestro Gerard Schwartz was thrilled and hooked him up with composer in residence Samuel Jones.

The Staadeckers understand the importance of “getting out of the way” so the artist can do his or her job. (“This is not about you,” says Benita, “this is about you making an avenue available for an artist to do work.”) But Jones invited Charlie to “tell me how you feel,” and thus began a fruitful collaboration. At Charlie’s suggestion, Concerto for Trombone and Orchestra is the musical embodiment of a freshman’s whirlwind first days at college. It premiered in 2009, earned rave reviews and has since been performed across the country.

The Staadeckers were eager to commission another work from Jones. There was just one problem: Thanks to the dive in the real estate market, they didn’t have enough money to do it alone. But their infectious charm convinced four other couples to join them in funding a piece honoring the bond between fathers and daughters. (The theme was Charlie’s idea; all of the commissioning couples—plus Jones and Schwartz—have daughters.) Premiering this month (6/2, 6/4, 6/5; seattlesymphony.org), Reflections: Songs of Fathers and Daughters coincides with Jones’ final appearance as composer in residence. The Staadeckers are beside themselves with anticipation.

Despite their excitement, the duo recognizes that such efforts won’t solve arts funding woes. “It can’t just be people giving toward commissions,” says Benita. “Arts organizations need us, they need annual funders, they need an endowment fund.” And while the couple won’t reveal how much they’ve paid for each commission, they do say that at their income level, it requires making choices. “You have to give up something,” says Benita, who loves vintage jewelry. “You can’t go on a safari or a cruise, or get that emerald necklace.”

But, she adds, “You do a lot in your life that goes ‘poof!’ What will be lasting? What will make a difference?” Charlie chimes in, “The trombone concerto and Becky will live far beyond our lifetime.” Plus, he says, beaming, “We’re having such a good time. Where else can you spend money like this and have so much fun?”