By Introduction by Rob Smith 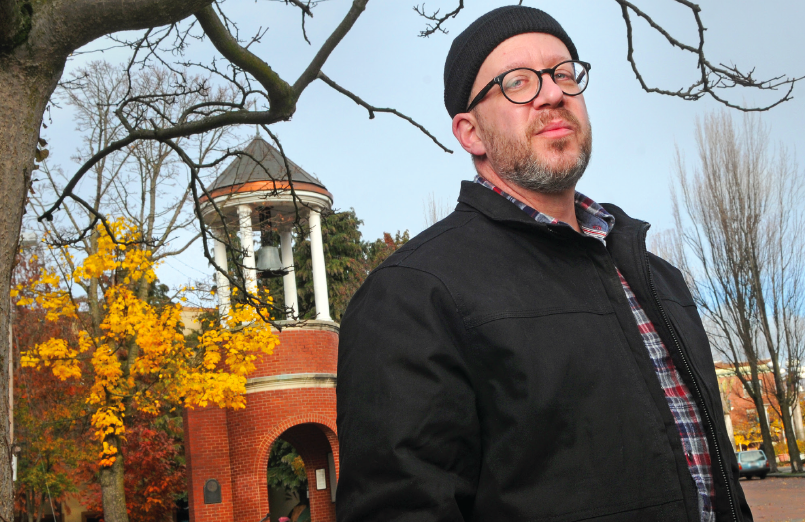 Holden, perhaps Seattle’s most famed amateur historian and “ﬁnder of things” (you can read about his colorful collection of artifacts in the May-June issue of Seattle magazine), has written a book that details Hubbard’s colorful exploits, “Seattle Mystic Alfred M. Hubbard: Inventor, Bootlegger & Psychedelic Pioneer.”

In it, Holden documents Hubbard’s colorful and unusual life, including some questionable scientiﬁc claims, his connections to the underworld and his passion for LSD. The book, published by Arcadia Publishing and the History Press, is available on Amazon. Holden’s ﬁrst book, “Seattle Prohibition: Bootleggers, Rumrunners & Graft in the Queen City,” was described as a “spectacular story of Seattle in the time of Prohibition.”

Here is an excerpt from his latest book:

It was a warm spring afternoon in Seattle; the type of idyllic day where the city’s inhabitants slowly emerge from their winter lairs to giddily soak up some badly needed sunshine amid all the newly blooming daﬀodils, tulips and ﬂowering cherry trees. On this particular day, Alfred M. Hubbard was hard at work inside a new store that he had just opened. While in Pittsburgh, he had developed a strong interest in the emerging ﬁeld of radio communication after hearing broadcasts from some of the nation’s earliest commercial stations.

It was a new industry and radios were slowly becoming a popular household item. Using his tech savvy to stay ahead of an emerging trend, Hubbard decided to open Seattle’s ﬁrst radio supply store where customers could purchase the proper equipment needed to listen to these exciting new programs. The store was located near Colman Dock, on Seattle’s waterfront and, as a harbinger of things to come, was one of the city’s ﬁrst enterprises dedicated solely to selling new technology.

Hubbard spent most of his days in the back of the store, assembling radio sets, as was the case on this fateful spring day when he heard the bell on the front door clang, signaling that someone had just entered his shop. He set his project down and stood up, ready to welcome a potential new customer. A well-dressed and somewhat familiar-looking gentleman stood near the entrance, curiously looking around at all the intriguing inventory of vacuum tubes and assorted radio parts. Greetings were exchanged and, after a round of small talk, the stranger introduced himself as local attorney, Jerry Finch.

Once supplied with a name, Hubbard was able to make the mental connection of who, exactly, this man was. Finch was well-known in the local papers as the attorney for “King of the Puget Sound Bootleggers,” Roy Olmstead. At the time, Prohibition was in full swing and Olmstead – ¬a former Seattle police oﬃcer – had become the region’s top liquor boss, supplying all the city’s clubs and speakeasies with top-shelf booze that he and his men smuggled down from Canada using custom-built speed boats. Olmstead’s exploits were well known throughout the city where he had become a bit of a folk hero.

Finch explained that Olmstead wanted to meet the young inventor to discuss a job proposal. At the time, Hubbard and his wife were living hand-to-mouth in a cramped apartment as he struggled to get his new business up and running. It was a ﬁnancially stressful time for the young couple, especially given that his wife was pregnant with their ﬁrst child and Hubbard was in serious debt to several diﬀerent creditors. The possibility of a big paycheck, therefore, was very appealing. With the allure of a potential lucrative job oﬀer, Hubbard promptly closed his shop for the day and the two men set oﬀ for the attorney’s oﬃce at the nearby Smith Tower.

Olmstead had become quite aﬄuent thanks to his bootlegging operation, which had grown to such an enormous degree that, for a time, he was Puget Sound’s largest employer. With so much money rolling in, he and his wife, Elise, had recently purchased a posh estate in the Mount Baker neighborhood that became known as the “Snow White Palace.” The Olmsteads were known for holding lavish parties and parading around town in luxury automobiles. Unfortunately for him, the Federal Prohibition Bureau had recently set up an oﬃce in downtown Seattle and local liquor rackets were starting to feel the heat. Prior to their arrival, the only concern for Seattle’s fraternity of bootleggers were the local police who could easily be paid to look the other way. These new federal agents, however, played by a diﬀerent set of rules and seemed immune to bribery. As a result, Olmstead was forced to think of other, creative ways in which he could stay a step ahead of the feds.

When the two men arrived at Finch’s downtown law oﬃce, a very friendly and cordial Olmstead was waiting for them. At the time, Olmstead was 38 years old and enjoying the best years of his life. He was known as “the Gentleman bootlegger,” as he didn’t allow his men to carry guns or engage in violence, and he avoided other vice such as gambling, narcotics or prostitution. Balding, very well-dressed and with a slightly chubby build thanks to all the ﬁne dining he could now aﬀord, Olmstead looked like a typical crime boss from that era, though with a decidedly more genial temperament than many of his underworld peers. His laugh was said to be infectious.

Introductions were made and Olmstead got straight to the point about the reason for this impromptu meeting. He explained that he had been following Hubbard’s engineering feats going back to the atmospheric power generator and wanted to oﬀer him a job as a technician. Speciﬁcally, Olmstead needed someone who could install communications equipment aboard the ﬂeet of cars, boats and planes used in his bootlegging operation and, to his way of thinking, Hubbard seemed like the right man for the job.

When presented with an opportunity, Hubbard had a natural aptitude for doing a quick round of mental arithmetic in order to calculate how to reap the greatest beneﬁts. With such an important opportunity now sitting in front of him, he took a few minutes to think the situation over and, after a moment of consideration, accepted Olmstead’s oﬀer … with some stipulations, of course. First, he would need Olmstead to pay oﬀ several thousand dollars of debt he had accrued, as well as open a charge account for his pregnant wife.

Additionally, he requested that he and his wife move into the basement of Olmstead’s estate. He had read about Olmstead’s new home in the papers and knew that he would need such an area for a proper workspace. Not to mention, he desperately wanted out of the tiny apartment that he and his wife had been living in. Lastly, Olmstead would need to advance him any money needed for the job, no questions asked. With a big grin on his face, Olmstead handily agreed to all of Hubbard’s terms and even threw in the free and unlimited use of one of his luxury cars. The two men then shook on a deal that would dramatically shape each of their respective destinies in a very profound way.