The Needling’s 2019 Year in Review: 6 Local Women Most Sorry for Outshining You This Year

None of these women’s accomplishments is really that big of a deal, and they probably just got lucky or something. They just thought you might want to know in case you hadn’t heard or whatever. Don’t worry: We won’t bring any of this up again 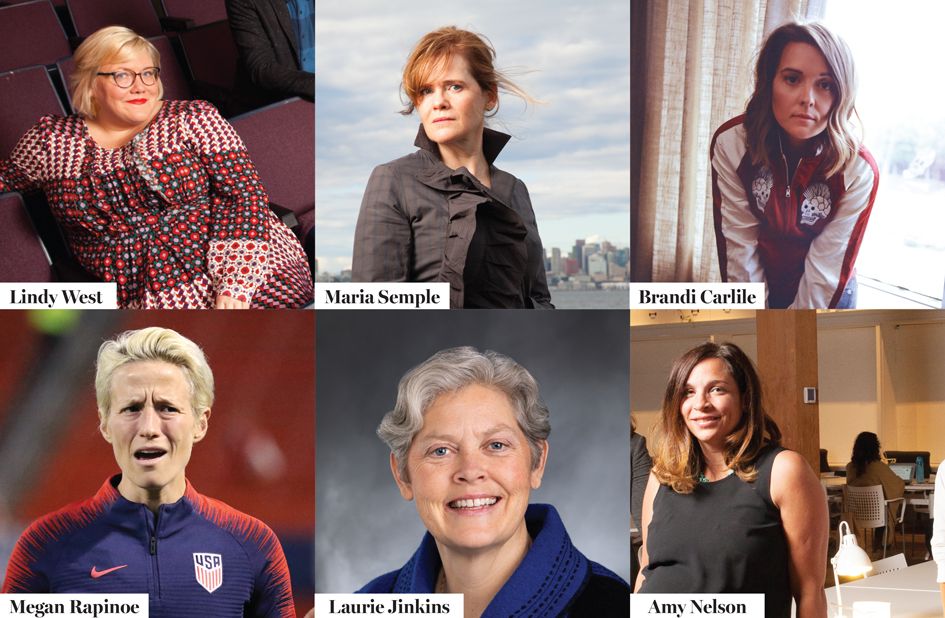 Lindy West’s best-selling book, Shrill: Notes from a Loud Woman, was adapted into a critically acclaimed Hulu show, embarrassingly renewed for a second season, to be available for viewing in early 2020. Shonda Rhimes, creator of Grey’s Anatomy and Scandal, also invited her to write an episode for a new Netflix/Shondaland-produced show and—oops!—she said yes to that, too. In all her spare time, West somehow plonked out another book, The Witches Are Coming, released in November. She apologizes to intimidated men everywhere who are living in fear that an angry, RBG-tattooed feminist will slide down their chimney this Christmas, confirming they’re on West’s dreaded naughty list.

he movie adaptation of Maria Semple’s Seattle-based 2012 best-selling novel Where’d You Go, Bernadette finally hit the big screen, with help from a few A-list celebrities who probably just had nothing better to do. Two-time Oscar winner Cate Blanchett played Bernadette, a character loosely based on Semple herself, but, like, so what? Semple is sorry if it seemed like her book is so classic, it drew an all-star movie cast or something. Highest apologies go to director Richard Linklater: Replacing most of the book’s comedy and leading female narratives with the somber perspective of an originally minor workaholic male character couldn’t have been easy. Sorry!

Longtime road-show warrior Brandi Carlile won three Grammys—but do awards even matter, you know? They’re whatever, as is selling out Madison Square Garden. If you think she should stick to performing spontaneous concerts at Pike Place Market with Foo Fighters lead singer Dave Grohl, she agrees and she’s very sorry about all this silly critical acclaim.

While Tacoma Reign FC soccer player Megan Rapinoe made international headlines this year for helping lead the U.S. Women’s Soccer team to its fourth Women’s World Cup title, she also used the moment to speak out about the ongoing gender pay gap that affects her and almost all women in every industry today. Upon further reflection, however, Rapinoe now says she’s sorry for “being such a downer.” Even if the U.S. Men’s Soccer team doesn’t win games or hearts in the same way, Rapinoe says she understands the U.S. Soccer Federation has no way to properly stroke male players’ egos except to pay them more than female athletes.

This summer, Representative Laurie Jinkins (D-Tacoma) simultaneously became the first woman and the first open lesbian to be Washington’s House speaker. Although she feels a bit guilty for breaking a long-held tradition, she also promises to bridge divides in the state Legislature by being the first person to shotgun a Rainier on the House floor.

Amy Nelson, who cofounded the coworking space The Riveter in 2017, is very sorry she couldn’t resist taking the company national this year. Despite what we can only assume was a case of truly crippling but very ladylike imposter syndrome, she managed all this while pregnant with the fourth daughter she’s had in a little less than five years. Nelson says she’ll try to get herself in check and stop schmoozing with the likes of Gloria Steinem and Michelle Obama so that her daughters grow up with a more realistic role model.