A roundup of Seattle happenings, news and hidden gems 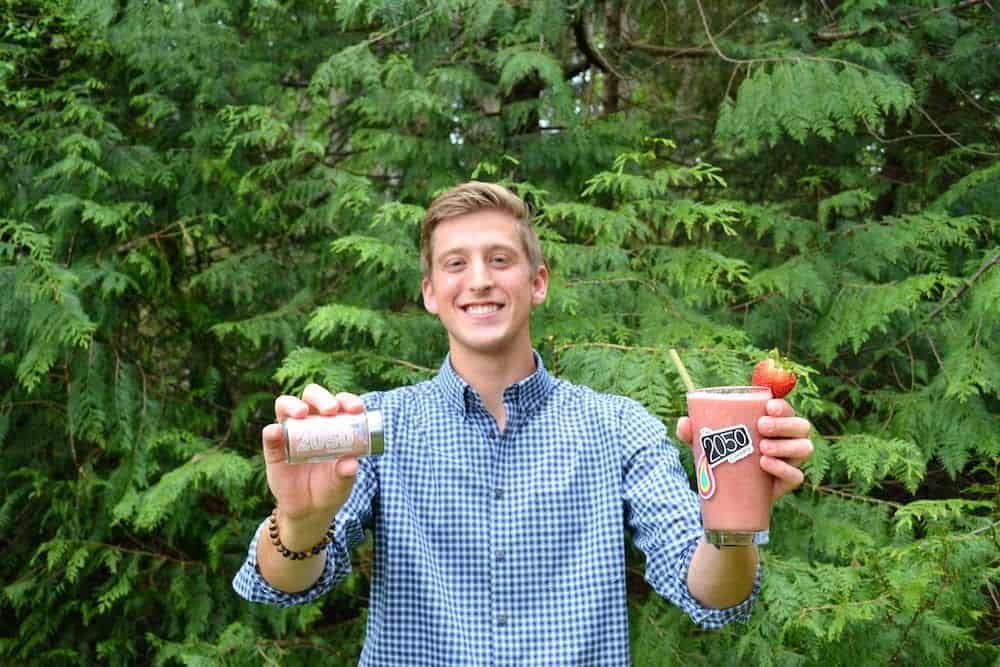 This article originally appeared in the November/December 2020 issue of Seattle Magazine.

Austin Hirsh has made a smoothie for himself every day for the past five years. He’s spent the past two years developing a smoothie product that grinds renewed water from imperfect and surplus produce to create an instant dry powder for fruit smoothies.

Hirsh, a Gig Harbor native, developed the product while earning a degree in mechanical engineering at the University of San Diego, where he graduated last year. He participated in multiple pitch competitions and won first place at the USD Fowler Global Social Innovation Challenge last year.

The name of the product, Smoothie 2050, is a nod to predictions by scientists that reducing food waste is the top way to prevent global warming by 2050. Hirsh recently raised more than $40,000 from 448 backers on Kickstarter, double his original goal.

So-called “upcycled” fruits and vegetables have become popular during the pandemic as consumers seek bargains, prioritize sustainable practices and cut down on waste. For example, Imperfect Foods, a company that delivers misshapen produce, has more than doubled its food-box deliveries since March and raised $72 million last May.

The industry trade publication notes that Tony’s is among the country’s first carbon neutral roasteries, citing its plan to offset five years’ worth of emissions every year for the next decade, with the goal of offsetting its entire historic carbon footprint by 2030.  Tony’s is also a founding member of World Coffee Research, an organization that helped develop a new plant variety that grows under a canopy of shade trees, eliminating the need for coffee farmers to clear-cut virgin rainforest to grow coffee in full sun conditions.

“Big, hairy, audacious goals — commonly known as BHAGs to Tony’s staff — aren’t new for the company. Every year for more than a decade, each employee has been asked to share one,” the magazine notes. “What’s more, one of the first BHAGs CEO Todd Elliott remembers setting just came true — to earn the distinction of being named Roaster of the Year.”

One hundred percent of the profits from one of the award-winning entries — Look for the Helpers Blend – will go to the Bellingham Food Bank. Tony’s Coffee was founded in 1971.

Adam stern brought home to Seattle what he learned during 15 years in Argentina to create a line of balsamic vinegar and virgin olive oil products.

His new company, Full Olive, sources all products from friends he met while spending 15 years in Argentina. He personally samples ach product himself. He details the history of each product and tasting notes on the Full Olive website, and says he “has a commitment” to hand-picking products directly from the producer, “just as it’s done in Argentina.”

Stern grew up in Winthrop and recently moved back to the Seattle area from Mendoza, Argentina, where he ran a luxury wine tour agency and ski tour company. His gourmet South American food company was born out of a desire “to bring the best flavors back” to the Pacific Northwest.

“We’re here to give you a taste of what we hope will ignite your desire” to travel to Argentina, he says.

Best friends Cody Chan and Thomas Brown are the cofounders of Food For Heroes Seattle, an organization that raises money to buy meals from local businesses to donate to health care workers. The group solicits donations via its GoFundMe page and then reaches out to restaurants that its founders and volunteers think could benefit. The group works with Swedish Medical Center to identify eligible health care workers.

Brown was especially moved during the early days of the pandemic, when he noticed the “desolation and destruction” Covid-19 wrought on the community. “Seeing all this sparked a sense of ambition and a commitment to my community,” he says. “I was inspired by the dedication of health care workers and first responders and the commitment of small business owners.”

Food for Heroes has raised $4,375 through GoFundMe and has served about 250 meals. It is in the process of becoming an official nonprofit. Brown is talking with contacts in Denver and Minneapolis about opening chapters there.

They’re all mothers and they’re all helping one another remain sober in very challenging times.

Paulson started the group by posting a photo on Instagram offering help to her audience of almost 38,000 followers.

Paulson, the founder of the group, holds free meetings with cohosts Jessica Landon, Michelle Smith, Celeste Yvonne and Jen Elizabeth on Wednesdays. The Sober Mom Squad Facebook group has more than 1,000 members. Though they have never met in person, the group coming together felt “meant to be,” Paulson says. All had struggled with alcohol.

Since the pandemic has made resources for helping with sobriety inaccessible, such as going to the gym or attending an Alcoholics Anonymous meeting in person, the group has become an important platform for helping others maintain sobriety and “explore their relationship with alcohol,” Smith says.

“We’re trying to juggle so much all at once with, you know, working and raising children and being head of household and throwing a pandemic in there,” Smith says. “That’s kind of how the virtual platform came to be, is that we have to get creative on what’s going to work.”