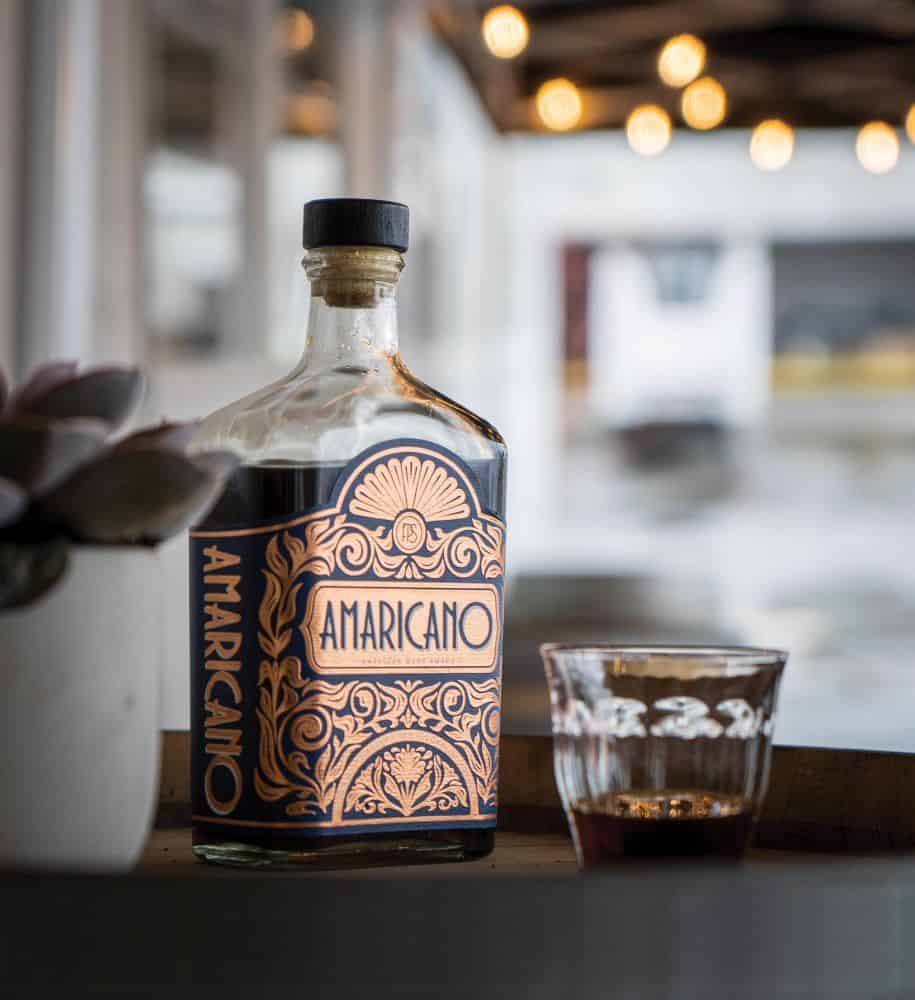 Jamie Hunt first became enamored of an Italian herbal liqueur called amari during trips to Europe. So she did what lots of aperitif-loving travelers dream of and launched a distillery.

Fast Penny focuses on creating high-quality amaro and amari using organic and sustainable ingredients under the Amaricano brand. The women say they want to support other women and local communities while shaking up the beverage industry. They pledge to donate 3% of bottle revenue to Seattle-area community organizations.

“Starting Fast Penny Spirits was a way to create the high quality amari I love while providing a platform to give back,” says Hunt, whose grandparents emigrated from Italy. “It’s more than I could do as an individual.”

“The spirit industry is working toward a refocus of making the sustainability and quality of our choices on our table match what’s in our glass,” she says. “And we are here for it.”

Thinking Inside the Box

Gift and subscription boxes took off during the pandemic, both in Seattle and across the nation.

Just ask Lendy Hensley, Katy Carroll and Shana Hicks, who created Bite Society after the pandemic forced the closure of their longtime business, City Catering. Or talk to Aljolynn Sperber, who founded her personal care products business, Lady Box, in late 2019 and shipped her first prod-ucts in February 2020.

For Hensley, Carroll and Hicks, Bite Society is nothing short of a reinvention. It features high-quality foods, including coffee, tea, champagne, cookies, chocolate and extra virgin olive oil. The company offers 34 different gift baskets ranging in price from $39 to $395.

“Curating the gift baskets is like creating a mini event,” Hensley says. “We’ve incorporated one of our tried-and-true values from the catering days of presenting that perfect bite. Many of the baskets are designed with that bite in mind and providing the goods for people to find their own perfect bite.”

Sperber’s subscription box company has shipped upward of 1,000 boxes during the past 15 months. Lady Box focuses on women’s health, delivering organic, self-care products such as pads, tampons, and panty liners. Snacks, of course, are included.

Sperber launched the business as a solo mom who often struggled with painful periods. Lady Box has partnerships with Project Untaboo, another Seattle business that offers period products. Future plans include creating resources for women who are pregnant, post-partum, perimenopausal and menopausal, as well as launching health coaching for women.

“What if there was something that made women feel cared for during their period, empowered by understanding the options in period products, healthy and safe self-care items, and snacks available?” Sperber asks. “That’s our goal and vision.”

Subscription boxes generated about $10 billion in sales in 2019, according to a McKinsey Study, and an estimated $15 billion last year.

An ambitious entrepreneur is working to bring a massive surf park to the Yakima Valley.

Joey Lawrence, a former University of Washington gymnast, began writing a business plan five years ago and is in the process of assembling an investment group for the project, which he anticipates will cost around $40 million. Lawrence is touting new artificial wave technology that creates “almost a direct simulation of the ocean.”

His company, called “Barreled,” has acquired 80 acres about 15 minutes east of Yakima and has engaged Spanish company Wavegarden to build the park. He has partnered with Roy Farms on the project. His target opening date is spring 2024.

“We’re bringing the coast close,” says Lawrence, noting that the Yakima Valley draws 3 million tourists annually. “This will be a facility where you take the skills you learn at Barreled and take them out into the open ocean.”

Lawrence says the community has been generally supportive, but admits there has been some opposition. He must still secure several permits and needs approval from the state Department of Ecology to proceed.

“This will be like a giant pool in the desert,” he says.

Just in time for summer: a new single-passenger electric vehicle retail center is set to open its first location in Washington state.

ElectraMeccanica, a Vancouver, B.C-based company, is preparing to open at Alderwood Mall in Lynnwood. The company’s sleek, futuristic-looking vehicles, called Solo, have only three wheels and one seat and are designed for urban transportation. They have a range of 100 miles, can reach speeds up to 80 miles per hour, and feature front and rear crumple zones, side-impact protection, a roll bar, and power steering and brakes. They also have air conditioning and a Bluetooth entertainment system.

The innovative vehicles aren’t even cars, according to Motor Trend. They’re “electric autocycles,” or “a three-wheeled car/motorcycle hybrid.” They cost $18,500 and are designed for both personal and commercial use.

Electric vehicles are growing in popularity. A survey by Recurrent, a Seattle-based startup that creates reports on used EV batteries, says Washington state ranks as the ninth-hottest market for used electric vehicles.

Davis, a former music industry executive, created the character Rodney Raccoon several years ago for a series of educational videos. He now wants to turn Rodney Raccoon into an animated TV series.

His company, WayOut Kids Inc., is in talks with a large entertainment organization about a coproduction and distribution deal for the series, which focuses on Rodney and his friends as they explore the Sky Dome Science Museum, a gigantic replica of the Earth’s most beautiful ecosystems. It is aimed at children ages 4 through 7.

Davis, who lives in Tacoma, is now cobbling together investors and launched a Wefunder campaign for the project. He estimates he’ll need to raise $2.6 million. He’s hoping to initially procure $500,000 to fund the first two or three episodes until a broadcaster agrees to supply the rest.

He says the lack of animators in Washington state is his biggest challenge.

“We’re not known for animation and cartoons here. One of the issues in trying to fund an animation project here is even angel investors veer away from it because they don’t understand it,” Davis says. “They don’t really get how it makes money. We’ve done video games, we’re a big techie area, but it’s more software, not animation and cartoons.”

Two Amazon Alums have created a new app that quickly appraises a home’s value and pinpoints which renovation projects will bring the highest rate of return.

“The idea of empowering homeowners to know more about their most valuable asset seemed like an obvious disruptive move and nobody had ever done it,” Bluhm says. “Our recommendations will be very specific.”

Users take pictures using the app and receive detailed information within minutes. The app even ranks recommended remodels based on neighborhood. It is free to use.

Homeowners who want to proceed are connected to a “well-matched” contractor. Plunk receives money for a qualified lead it delivers to a contractor and also provides information on how to obtain a home-renovation loan.

“We will tell you how much your home improves if a Whole Foods opens a mile away,” he adds. “We look at attributes. It might be a new park, school or commercial development, and we can quantify exactly how that affects your home price in that neighborhood.”

Spinach Bus Ventures, a firm founded by five Mount Vernon High School classmates, purchased the popular garden center and home, décor, and gift shop last year. It has since retooled it to better re-flect the legacy of the farming, forestry, and fishing that makes Skagit unique. Skagit Acres reopened this spring.

Skagit Acres is set amidst 26 acres of manicured gardens and features home-grown products, decor and gifts, a farm-to-table cafe, and locally sourced ice cream. In addition to all things nursery and garden, visitors can shop the greenhouses for everything from hand-poured pure soy Skagit Valley candles, statio-nery from local artisans, and sundries from the Skagit Pantry and Baking Center to gentlemen’s grooming supplies and copper cocktail shakers.

“We dug right in and took parts of the business that we wanted to update down to the studs to im-prove the signature Skagit experience,” says Skagit Acres CEO Andrew Miller.

Skagit Valley is nestled between the Cascade foothills and the Salish Sea. The Skagit River delta, which snakes through the region, is world-famous for its rich soils and spectacular natural beauty.  With sweeping vistas of Mount Baker to the north and the treelined Skagit River to the west, guests are immediately immersed in nature and natural systems.

“In Skagit Valley, nature rules and heals, and we hope our guests can feel that,” says Skagit Acres President Rachael Ward Sparwasser.

The Art of Weathering Winter: What “Self-Care” Really Is (and Isn’t)

The term “self-care” has become so overused that its meaning can be bent to almost any purpose. Is it indulging in a cocktail or abstaining from booze? Is it splurging on a skincare product or making peace with fine lines? Some have begun to use the term “community care” to refer to a commitment toward…