Check out a roundup of local hidden gems. 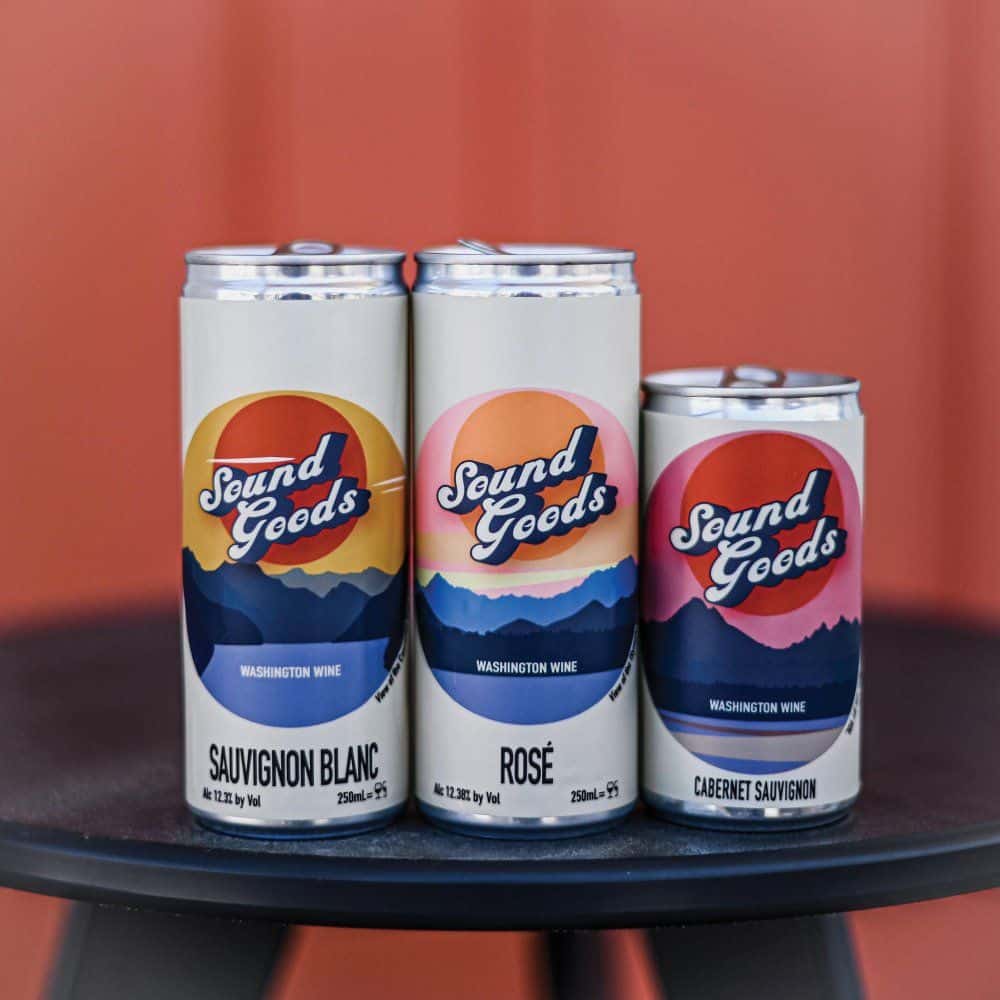 Jennifer Shernoff, Josh Watson and Sara Woods want to get their cans in your hands.

Shernoff  and Watson in March cofounded Sound Goods, a canned-wine company based in Shernoff ’s home in the Green Lake neighborhood. The enterprise produces small batch and seasonal products.

The wines are sourced from vineyards in the Columbia Valley and Yakima Valley and the grapes are 100% Washington grown. The launch offering includes a Sauvignon Blanc, Rosé, and Cabernet Sauvignon. The portable, single-serve wines are easy to pack and are geared toward wine enthusiasts for their outdoor adventures.

Shernoff  has spent more than two decades in startups, midsize and large companies, including at artificial intelligence company Ada and legal services fi rm Avvo. Watson, a self-described “engineer at heart,” has worked at Amazon, Microsoft and Intel.

Find the wines in more than a dozen restaurants and retail establishments across Seattle, including Chuck’s Hop Shop in Greenwood and the Central District, Ken’s Market Greenwood, Bizzarro Italian Café in Wallingford and TeKu Tavern, a bottle shop and taproom in South Lake Union. The list is constantly growing, says Woods, who handles much of the PR and marketing.

“I get frustrated when I go to places that have heavy beer and ciders and I don’t have a great canned wine, to-go option. I settle,” Woods says. “Now, wine drinkers don’t have to settle. They should be able to have a glass of wine on a boat or while hiking without a glass.”

The canned wine industry is exploding. Wine Spectator says sales jumped to $183.6 million last year, 90 times more than they were in 2012

Meghann White first designed clothes when she was only 5 years old. She recalls creating a simple skirt and Victorian blouse for a doll she also designed.

Now, the single mother is taking sustainability in fashion to a new level.

White launched her clothing company, Marie Marie, earlier this year with the goal of bringing more sustainable concepts to fashion. She buys both new and used items from her customers and engages local artists who transform the fabric and repurpose it.

Besides reducing waste, White says, “What I want is to create clothes that everyone with every type of body can wear confidently and comfortably.” Her first product is a peasant-style, off-the-shoulder dress. It is available at Peti Boutique in Wallingford.

White built a career as a data analyst before deciding to switch gears and enroll in fashion school seven years ago. She hit upon the idea for her company during her runway project. The name Marie Marie is a nod to both her mother and her daughter; their middle names are both Marie

A designer for Seattle’s iconic Ben Bridge Jeweler bested 200 other contestants to win a prestigious national award for her design of a diamond engagement ring semi-mount inspired by a sunrise.

Angela Hope took home first place in the Jewelers of America CASE Awards in the category of engagement rings up to $5,000 in retail value. The annual awards competition recognizes creativity, artistry, style and excellence in jewelry design from top jewelers across the nation.

“Her design showcases exceptional craftmanship, talent and creativity,” says Jewelers of America spokesperson Amanda Gizzi.Jewelers of America is a national trade association, with the primary purpose of improving consumer confi dence in the industry. Its members include more than 8,000 jewelry stores across the country.

Hope’s design is made of 14K palladium-alloyed recycled white gold with baguette diamonds. The ring retails for $2,399.

The owner of Pioneer Square’s Grace Gow fine jewelry began “Wax-On-Workshops” ring carving parties in 2018. She helps clients design their own rings in wax before professionally casting and finishing them. A few weeks later, clients receive their custom sterling silver or gold creations delivered to their door.

One night, a couple signed up to celebrate their anniversary. Another couple wanted to create their own rings before they eloped.

An idea was born. McCadden still offers Wax-On-Workshops, but in October created a “Wow-To-Go” kit focused almost exclusively on what she calls “commitment” rings. Couples receive their kits in the mail, attend a live virtual class or arrange for an in-person session and carve a ring from wax. Eighty percent are wedding rings; the rest are anniversary celebrations.

McCadden, who operates her personal studio from her Vashon Island home, has been a jeweler for 10 years. She says plenty of couples commission personal wedding rings, but few actually have the opportunity to design their own.

“These are sentimental moments,” notes McCadden, who says she’s helped create rings for about 50 couples. “People are bringing these moments to the workshop.”

A unique marriage of art and health that aims to create the most diverse medical research database in U.S. history is now on full display in Seattle.

Residents can scan a QR code at one of eight art installations on traffic boxes, the electrical boxes on sidewalks and street corners, throughout Seattle. They are promised “an educational, augmented reality experience about ‘All of Us,’ an initiative that aims to engage 1 million people across the country to build the medical database.”

People who join will share information about their health, habits and their neighborhoods. Researchers will use the data to learn how biology, lifestyle and environment influence health. Two Seattle artists, Heather Sparkles and Dina Rau, were chosen for the Traffic Box Community Connector project.

Sparkles (below), a Kent artist, created a painting inspired by nature, with two hands of a doctor holding Mount Rainier. “It’s a dream come true,” Sparkles says. “I like to combine elements of mystical, magical storytelling with realism. I like connecting people to each other and to nature.”

The boxes are located at:

Leonardo da Vinci was an inventor and artist. He was also an anatomist, sculptor, engineer, theorist and architect.

You can learn about all of that and more beginning later this month when Seattle’s Museum of History & Industry hosts the West Coast premiere of Da Vinci: Inventions, described as one of the most comprehensive explorations of his work. The interactive exhibit explores his life and accomplishments in depth, and features numerous examples of his machine inventions. Visitors will even be able to push, pull, crank and interact with many of these machines for a hands-on understanding of the scientifi c principles behind them.

The 16 themed areas explore how da Vinci’s inventions laid the groundwork for items including the airplane, helicopter, automobile, submarine, parachute and bicycle. The exhibit is particularly noteworthy because da Vinci never published many of his findings.

MOHAI Executive Director Leonard Garfield notes that the exhibit, created by Australia-based Grande Experiences, is geared toward those exploring da Vinci for the first time as well as students of the man who was a leader of the High Renaissance. He lived from 1452 until 1519.

The exhibit premieres July 31 and runs through Jan. 3.

One of Seattle’s oldest and most beloved restaurants has won a national competition in honor of its historic and cultural significance.

Maneki, a Japanese restaurant founded in 1904 that specializes in sushi, will receive $40,000 in grants funded by American Express and administered by the National Trust for Historic Preservation as part of the “Backing Historic Small Restaurants” program. Maneki is one of just 25 winning restaurants across the nation and the only one in the Pacifi c Northwest.

It will also receive $5,000 from AT&T Business and Dell Technologies to upgrade its digital presence. Other organizations will help with software, social media and educational tools and training.

Maneki last summer launched a GoFundMe campaign after Covid-19 forced the restaurant to close in-person dining. As of the end of May it had raised $54,507, vastly exceeding its $20,000 goal