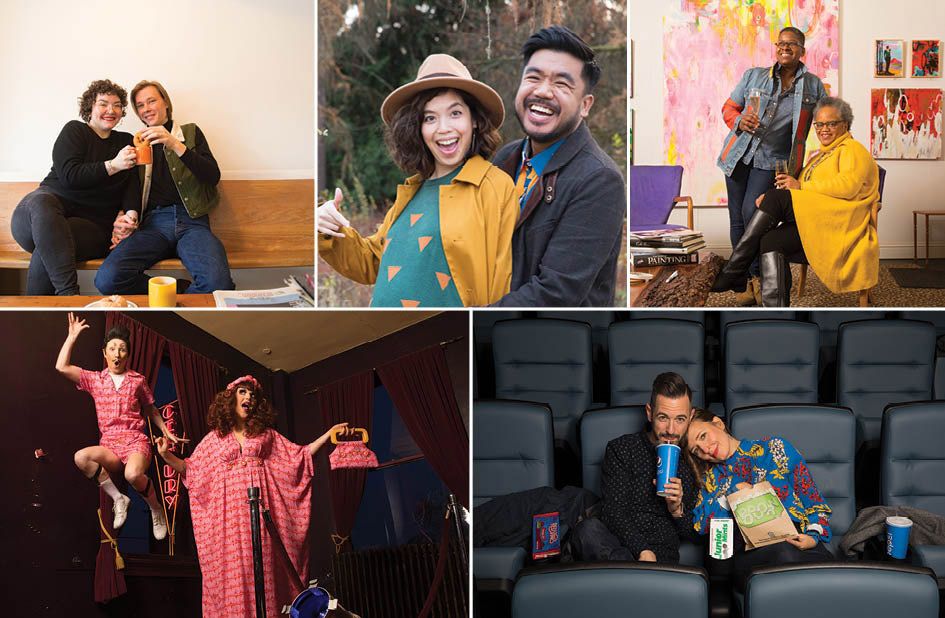 Burlesque star Kitten LaRue and drag king Lou Henry Hoover shared the stages of Seattle shows for years before they ever really talked. “I do clearly remember the first day she walked into a rehearsal, and I was like ‘Who is that?’” Kitten says. One night, they finally sat down together in the same booth after a show. “I remember she took her hair off and put it on the table, literally let her hair down with me,” Lou says. After that conversation, Lou ’fessed up to a mutual friend, “I like her,” and about six months later, Kitten booked Lou to perform with her burlesque troupe, The Atomic Bombshells, in Provincetown, Massachusetts, for the summer. “It started out as a showmance that just never quit!” Lou jokes. The two tied the knot in 2013 in a glamorous gala at The Stables in Georgetown.

“Our nonstop schedule of showbiz and travel can often be exhausting, but almost every morning I wake up and pinch myself that I get to do this crazy stuff with the person I love,” says Kitten, who estimates that the duo is on the road 70% of the year. “No matter where we are in the world, being together makes it feel like home. It’s a dream life, honestly.”

When they’re not dazzling crowds with their glamorously campy performances, the couple can be found after the show gathered around the big table at The Tin Table, sitting at the bar at the Triple Door or hanging out at a grimy gay dive bar (Pony is one of their favorites). But for Lou, the mornings remain a magical time. “Since we work nights so much, I really cherish our morning dates—sweet, slow-start days when we have brunch, just the two of us, at Joe Bar,” Lou says. Four nights a week, Aaron Verzosa and Amber Manuguid maneuver with deft grace behind the postage-stamp-size kitchen line at Archipelago, their exquisite Filipino American restaurant in Hillman City, where they serve eight guests at two seatings each night. “The main challenge has been learning about each other in a work environment. People tend to be very different at home and in a professional setting,” Verzosa says. (The couple married in 2014, and Archipelago opened for business in late 2018.) “When we first started working together, it was almost like meeting your spouse for the first time. We had to redevelop our professional and personal connection to establish a solid ground to thrive in.”

The couple met in a Tagalog language class at the University of Washington in 2007. “A lot of Filipinos don’t necessarily have their language,” says Verzosa, who is a Northwest native and second-generation Filipino American, as is Manuguid. “We were in this class trying to deepen the understanding of where our parents were from.” For the class final, the students had to write and perform a play in Tagalog; Aaron played Amber’s boyfriend. “It was funny because I don’t think we talked to each other at all for the first two parts of the year,” Aaron jokes. They found themselves hanging out with the same classmates and eventually, a relationship blossomed. “Both of our parents have really great stories of how they got to America and found each other,” Aaron says. “When you try to find those deep connections that go beyond yourself and have a connection with family and your community, and when you get attached to that connection with your partner—to something that’s bigger than yourself—I do think that can be helpful to not only be together as a couple, but to thrive together.” Val met Kim on a blind date in 1997. Valerie Curtis-Newton, an accomplished theater director who now heads the MFA directing program at the University of Washington, asked a friend who always had new dates to connect her with a person. “He asked what kind of person. I told him that I preferred a person of color. He said, ‘All the men of color I know are gay.’ Then he said, ‘All the women of color I know are gay.’ I said, ‘That’s the way being bisexual works. Hook a sister up.’”

Two weeks later, Val’s friend informed her that he’d given her number to Kim Powell, but that Kim was shy and probably wouldn’t call. Val took charge and told him to give her Kim’s number. (Her personal motto is: “Find the fear in the room and face it.”) Val called Kim, and they made a date to meet at The Easy. “We arrived dressed exactly alike,” says Val. “After dinner, [Kim] invited me for a nightcap at the spot that I had arranged to meet my friend in the event that I needed an escape hatch. I didn’t. We have been together since that night.”

Kim, a fellow creative and metalwork artist, has a few tips for maintaining a healthy relationship: Greet each other every day with “Good morning” and end each night with “Good night,” she says. “And in our household, the wife is always right.”

“We are so blessed. It just gets better, and we get stronger,” Val says. “I’ve said this before: She lifts me up, and I hope I do the same for her.” “I actually turned Cee down when they first asked me out—they had never dated a polyamorous person before!” says Callie Little, who met her spouse, Cee, seven years ago on OkCupid. “After a few emails, they won me over by offering a dinner date, and when I showed up, I was instantly charmed by their sincerity and gentle nature.”

That dinner date at Cafe Gratitude (in Santa Cruz, California, where they lived at the time) was almost thwarted when Cee spotted some of their family members coincidentally going to the same restaurant. “But I saw them outside and quickly got rid of them,” Cee says, laughing.

Cee, a freelance designer, was drawn to Callie’s confidence in herself, how she shamelessly asked for what she wanted and established her boundaries around that. Callie, a journalist and sex and relationship coach, was taken with Cee’s natural tendency to grow and learn. In 2015, the couple had a pie-themed wedding and moved to Seattle. Two years ago, their 7-pound Pomeranian mix, Peach, joined the family.

Polyamory isn’t easy, but Cee and Callie have figured out how to make the intricacies of having multiple partners work for them: “listening and communicating with earnest interest and compassion,” Cee says. Callie agrees. “I think the biggest thing is being willing to feel all the feelings, to own them, talk about them and see the conversation through to the end, every time.” In the spirit of embracing all the loving relationships in their lives, for Valentine’s Day in 2019, the couple threw a metamours party (that’s your partner’s partner, with whom you have no romantic connection). They invited all the people they were dating at the time, as well as all the people those dates were dating at the time. “It was really sweet,” Callie says. Rand Fishkin likes to joke that he met Geraldine DeRuiter in the traditional Gen X way: on the bus after a Weezer concert in November 2001. “We’d met a couple times before then; he was friends with my ex’s sister,” Geraldine says. “And I’d actually had this fleeting thought when the ex and I broke up that it was sad that I wouldn’t get to see that Rand guy anymore.”

But she did. After that Weezer show, when a dark-haired man offered his bus seat to an older woman—the only person on the bus to do so, Geraldine remembers—the friend she was with insisted it was Rand and proved it by shouting his name before ducking behind Geraldine. “I haven’t spoken to her in nearly 20 years, but I suppose I’ll always owe her for that,” Geraldine says.

Seven years later, the couple got hitched. Today, their relationship plays out on social media in hilarious and relatable ways—which is no surprise, as he’s a tech founder, and she’s an award-winning food and travel writer of popular blog The Everywhereist. “I once told Rand that if the world was made up of people like him, it would be a better place,” says Geraldine. “He’s so generous and patient, and he’s always letting people know exactly how wonderful they are. When I wake up in the morning, the first thing he says to me is ‘Hey, gorgeous!’ even though my skin is obviously made of spiders. Also, he leaves stuff everywhere and he never checks the mail. But whatever.”

“If Geraldine is your friend, you can call on her for anything,” Rand adds. “She gives so much of her time and energy, her love and support, to those around her, especially in their times of need.”

These days, the couple doesn’t have a lot of downtime. But when they do, they love going to the movies. “Something about sitting in a dark theater with him makes me realize how little has changed,” Geraldine says. “We keep getting older, but it’s still just the two of us, watching a story unfold.”