Cook Your Own Healthy Dinner at Shabu Chic

This sleek spot offers a fashionable backdrop to the Japanese version of hot pot. 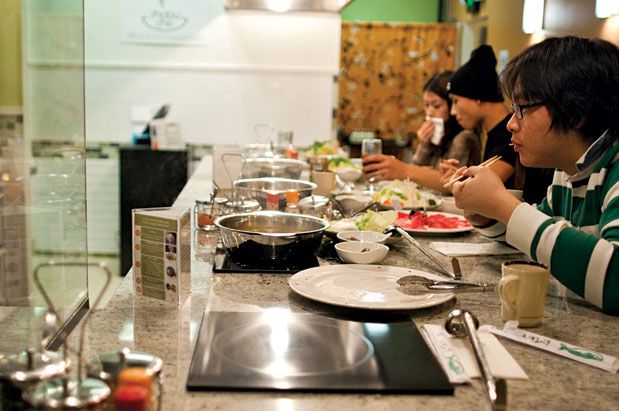 In Seattle’s Chinatown–International District, there is no shortage of hot pot, the Chinese fondue in which you cook presliced meats, seafood and/or veggies in a pot of boiling broth set in the middle of your table, customizing with hot sauce, or garlic or soy sauce as you choose. But until recently, the Japanese version, shabu shabu (named for the swish-swish sound the food makes as you move it through the hot broth), had remained elusive. At the sleek, new Shabu Chic, emerald walls and countertops fitted with personal cooktops are a fashionable backdrop for the spare, clean flavors of the food.

First, you’ll choose a broth—the kombu broth (flavored with seaweed) is the most traditional, although the spicy miso broth is a nice choice, too. You can opt for vegetable or pork dumplings ($10.99 for eight), tofu and veggies ($9.99), thinly sliced rib-eye steak ($11.99 for 10 slices) or the gorgeously marbled Wagyu (American Kobe; $24.99 for 10 slices). Along with your choice of protein, you’ll be served a plate piled high with cabbage, udon noodles and seasonal veggies, and a small bowl of white or brown rice. Finally, there are two sauces: a citrusy ponzu and a creamy goma (sesame) sauce, each set in small bowls before you.

You’re meant to swish-swish your food through your personal broth, dip a bite into one of the two sauces and eat. It’s fun, it’s healthy, and hovering above a pot of boiling broth in the cold of February has its benefits. To drink: house cold sake or a Sapporo, both better choices than the wine on offer.