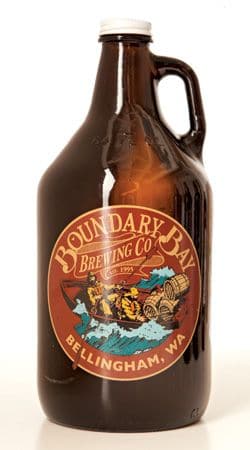 As much as I hope to check visiting all the great new craft breweries that Kendall Jones wrote about in our current Beer issue off my beer bucket list over the next several months, it’s unlikely to happen.

I’d driven by dozens of times and wanted to stop in, intrigued by promises of Friday beer tastings, more than 1,200 choices of bottled beers and 600 wines for less than $15.

Open for about a year, the place certainly has countless bottles of wine, but the big hit is the back area where they serve a rotating roster of 23 beers on tap and have seating for about 20 people.

Typically, about half of these are Washington or Oregon brews. You can bring your own growler—those big moonshine-like jugs that holds about a gallon of beer (shown above)—and get it filled up with whatever it is they have on tap.

Owner Chuck Shin works in different beers in each time, and says that a keg typically lasts about 5-7 days. Price depends on the beer, but the average cost is $11 to $14 a growler. (Sometimes more if the beer is a special import—Shin mentioned a $40 growler, because it was a beer imported once a year from Belgium).

In addition to hosting special tasting events, every Friday Shin hosts a “Brewer’s Night” from 5-8 p.m., where a craft brewer is on premise to sample and discuss their beers. Four two-ounce samples are $1 per person (bargain of the beer-lover’s century) and tonight’s tasting is Stone brewing from San Diego.

Good news for the family-friendly neighborhood: Kids are allowed in the back tasting area until 9 p.m.

Chuck’s sells ice cream and pizza slices—and has a candy aisle (that according to my 9 and 7 year old is “awesome!”) that will keep them entertained debating the virtues of various candies that come in a plastic tube.

Oh, and while we’re on the subject of beer, this just in from Kendall Jones of Washington Beer Blog and author of much of our Beer issue.