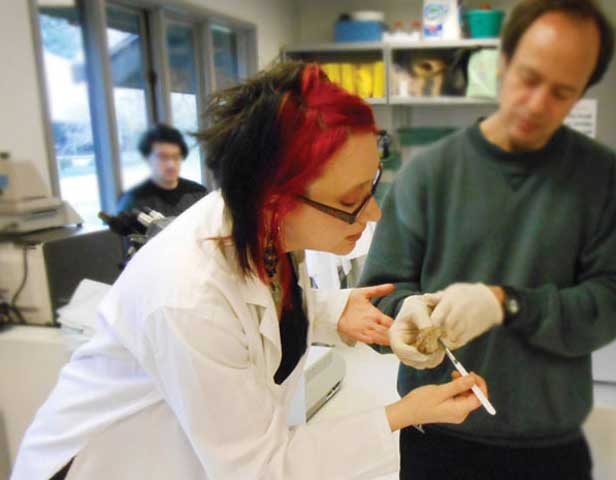 !–paging_filter–pWhen an 11-year-old terminal pediatric brain tumor patient named Violet chose to donate her brain to science it inspired brain cancer specialist Jim Olson to rethink how he tackles finding a cure for cancer. He founded a href=”projectviolet.org”Project Violet/a, a program at Fred Hutchinson Cancer Research Center by which, for a donation of $100, anyone can join one of four experiment teams—Sunflower, Spider, Scorpion or Violet. Each team represents a protein found in nature that Fred Hutch scientists are studying to kill tumors. Team Spider, for example, tests a protein from the funnel web spider and Team Scorpion investigates a scorpion protein. Project Violet is one of a handful of local startups that are finding ways to get the community involved in their health research. In October, a href=”hivebio.org”HiveBio/a opened its doors in Laurelhurst as Seattle’s first DIY bio lab, where, for a monthly or single-use fee, people can take hands-on classes and workshops led by volunteer experts on topics medical to technical, such as biofuels, making a microscope or learning how to dissect a sheep brain. Another crowdfunding startup akin to Project Violet is Seattle-based a href=”experiment.com”Experiment/a, a kind of Kickstarter for science launched by two University of Washington grads that has garnered Bill Gates’ seal of approval. Researchers post projects here that need funding; as of press time, the medical category included a project researching the link between lung infections and dementia, and curing heart disease using human stem cells./p

Coping With Cancer, A to Z

From talking with loved ones about it to finding the right doctor to treat the disease, a cancer diagnosis brings with it many questions. Swedish’s newest podcast series, Voices of Cancer (swedish.org, search “Voices of Cancer”), offers guidance. Host Rose Ibarra interviews cancer patients, survivors, doctors and other experts in episodes that have thus far…

!–paging_filter–pNew information about supplements vitamin E and selenium, thought to protect against cancer, reveals that they appear to do the opposite in high doses, according a href=”http://www.fhcrc.org/en/news/center-news/2014/02/vitamin-e-selenium-pros…“to a study led by Fred Hutchinson Cancer Research Center/a.nbsp; Researchers looked at the micronutrients’ effect on 4,856 men that were divided into groups that took them alone, took…