The show doesn’t let the audience breathe, serving up round after round of ritual and repetition to drive home the point 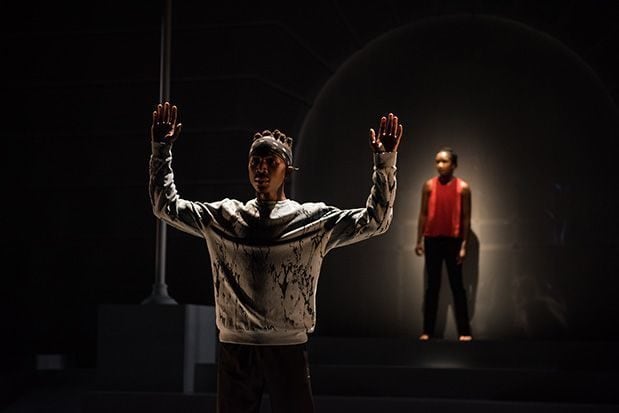 Choreographer and Spectrum Dance’s executive artistic director Donald Byrd was inspired to create his new show, SHOT, after watching footage of the shooting (and murder) of Keith Lamont and the pleading of Lamont’s wife, Reykia Scott. It is her words that weave in and out of this show, currently running at the Rep in its world premiere. Here are three reasons why I recommend this fearless, visceral show.

Reason One: It’s fearless
In addition to dance, SHOT uses video, lecture and spoken word to shine a harsh light on the genocide of black males at the hands of police. The light gray set that lighting and scenic designer Jack Mehler has created for Byrd’s amazing company also acts as a projection screen for videos of past shootings. Rob Witmer’s sound design haunts the ear with audio clips of police violence, along with an evocative score by composers Jaimeo Brown and Julius Eastman. The show doesn’t let the audience breathe, serving up round after round of ritual and repetition to drive its point home. There’s a lecture in the middle that feels like a TED talk, before we quickly find ourselves jettisoned to an imaginary courtroom where members of the company argue both sides of the issue—finally breaking down into a cacophony of yelling as each group fights to be heard.

Reason Two: Nia-Amina Minor and the Spectrum Dance Company
Not only is the dance company asked to take on Byrd’s choreography, which demands strength and economy, where no move is wasted; they’re often called to be talking heads for both sides of the issue, as the recurring words of Reykia Scott are heard throughout: And he better live. He better live.

Byrd has wisely entrusted the dialogue to Nia-Amina Minor to breathe life into Scott’s words. It takes a talented and highly skilled actress to deliver the same few lines in a different way and make them compelling each time, and Minor is more than up to the task. Her performance is the heart of the show. One highlight in the piece is a chorus of, “Stop! Please don’t shoot!” repeated by the men in the company, while they assume the positions of stop, search and arrest—finally placing their hands where police can see them.

Reason Three: It draws you in
While other companies simply talk about it as a lofty ideal, the Spectrum dance actually is diverse; every body type and color are represented. The ensemble moves with such synchronicity and grace often color is indistinguishable; other times Byrd clearly shines a light on race, and there’s a conflict between black and white. But one never knows when the switch will be made, and it’s clearly up to the audience to figure out when the ensemble is jelling as one, and when they’re at odds.

The most urgent part of the show is the end (spoiler alert). The dancers pay tribute to murdered black men by calling out their names then following with individual tributes to each through dance. But soon the names of the murdered fill the screen and the last image we’re left with is the company raising their hands, as if they’re being detained, and waiting. Waiting for what, we know. Reykia Scott: He better live. Y’all hear this and you see this right? He better live. He better live. I swear he better live.