All over town, restaurants and industrial kitchens are renting out space to producers of small-batch This article originally appeared in the December 2010 issue of Seattle Magazine.

Inside a cinder-block building tucked between a tattoo parlor and the Azteca Mexican restaurant on Ballard’s Market Street, a candy maker wraps shiny squares of freshly cut salted caramels. Down the hall, vegan caterers put the final touches on raw to-go lunches. Manning the stove, a street-food vendor preps ingredients for his taco truck.

Home to a half-dozen kitchen squatters—caterers and food purveyors who don’t have cooking spaces of their own—Ballard Kitchen’s fully stocked 1,800-square-foot space gives off an almost casual vibe that would make a typical restaurant’s kitchen seem militaristic.

“It’s not a pretty space,” says Will Leonard, entrepreneur and owner of Ballard Kitchen. “But it gets the job done.” His current roster of squatter cooks includes newbies (such as Jonboy Caramels and House of the Sun Raw Foods) and seasoned pros (the Pike Place Market’s Piroshky Piroshky preps its fillings here) that, for a reasonable monthly fee, gain access to an arsenal of professional-grade equipment, including jumbo mixers, a gas range, a dishwasher, ovens and countless other tools for mixing, prepping, storing and cooking.

Often referred to as “kitchen incubators,” shared cooking spaces like Ballard Kitchen are popping up across the country, giving culinary startups access to fully licensed kitchens—and, as a bonus, formal and informal business advice. You need only look inside your favorite Seattle restaurants to spot a squatter: 14 Carrot Cafe hosted street-food startup Tako Truk for several delicious months last year; mixologists are moonlighting making bitters; even tamales can be bought at the walk-up window at Georgetown’s 9LB Hammer.

Local pizza purist Brandon Pettit, owner of Delancey in Ballard and host to the maker of Rachel’s Ginger Beer, sees squatting as a logical progression in the city’s food evolution. “Seattle attracts a lot of people who like to make things,” says Pettit. Here in Seattle, where a strong startup culture has clearly paid off in tech and science, it seems only natural to apply the incubator model to culinary creativity. “San Francisco has had this going on for a long time. Portland has, too,” Pettit says. “We’re right in the middle of our own food revolution.”

To be fair, sharing kitchen space is not a new concept. Chefs have been loaning out cooking space for years. What makes this new wave of kitchen squatting distinctive is the increased demand from diners, home cooks and families who are asking for homemade, locally sourced foods. “It’s sort of like the ’70s redux, only we’re more sophisticated now,” says Anne Nisbet, co-owner of Cookie Box (and also a Seattle magazine contributor), a local craft cookie company that started baking in the kitchen of the West Seattle Eagles lodge.

The appeal of working from such a space boils down to the bottom line: affordability. It’s dramatically cheaper to borrow space than it is to build your own kitchen from scratch, says Chris Porter, owner of A la Mode Pies, who makes pies to order in the kitchen at Knee High Stocking Co., a Capitol Hill speakeasy. A former television news reporter and public relations director, Porter was able to start his pie company without having to worry about building a commercial kitchen or obtaining leases and bank loans. (Squatters must still secure the appropriate county and state permits to prepare and sell food.) Sharing a space with seasoned industry purveyors also gives Porter access to something not accounted for in a contract: access to like-minded entrepreneurs who are willing to share ideas—not to mention the occasional spatula or sheet pan.

Jason Alm, co-owner of Jonboy Caramels, echoes the importance of camaraderie. Just being privy to the industry chatter can be helpful, says Alm, who recently overheard a conversation at Ballard Kitchen about a supplier that made deliveries. (Alm had been driving all the way to Auburn to pick up his orders.) “We get ideas like that from the others all the time,” he says. 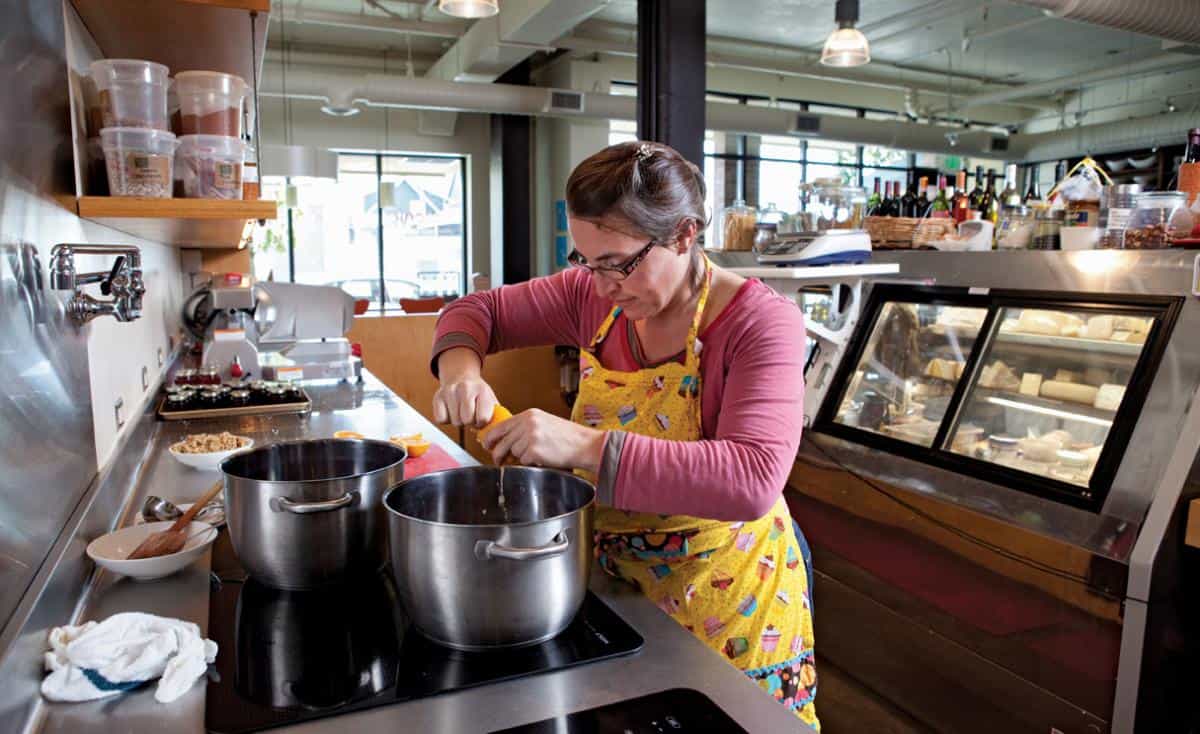 But squatting isn’t all kumbaya moments. Sharing space can be a bit like reliving your days with roommates. Follow the house rules and you’re in good shape. Forget to clean up after yourself and you might find yourself in an uncomfortable meeting. Shlepping ingredients and equipment can also be a challenge, squatters say. Rebecca Staffel, owner of local preserve startup Deluxe Foods, adores Picnic, the wine bar and specialty food shop where she squats, but admits that transporting special equipment from home to kitchen can be a chore. Each morning she brings in her own lemon squeezer, pans and knives. “Nobody wants to share knives. That’s a golden chef rule,” Staffel says. “I leave the place better than I found it and keep it really clean, but occasionally there’s a jam splatter. And I end up feeling awful.”

And, while squatters may have it easy when it comes to finding a space to cook, they, too, must jump through the usual permitting and licensing hoops before their products can be sold at farmers’ markets and retail shops. Such strict food laws have many cooks casting a hungry eye toward San Franciscans and Portlanders, who have long enjoyed the bounty produced by indie cooks. (Both cities have laws that make it easier to own a food truck or make salable products in home kitchens.)

Tapping into the do-it-yourself movement could have broader implications for the city itself. As more and more people adopt cooking as a way to make a living, local businesses and city officials can expect to see stronger demand for the loosening of regulations. In September, local foodies celebrated the passing of urban gardening regulations that make it easier to grow and sell foods in the city. This past summer, the city’s Department of Planning and Development drafted a street-food initiative in the hope of rolling out more food vendors on sidewalks and in city parks. For now, squatters often look to Portland—where it is legal to start a food-based business in your home kitchen—as the ideal model for food regulation.

With so many foodie startups, the discerning observer is left to wonder what exactly do the hosts of these squatters get out of the arrangement. For Pettit, it’s all about creating community, and cooking and eating foods using the resources around him. At Delancey, Rachel’s Ginger Beer—a customer favorite—is brewed in house by server Rachel Marshall, who also distributes kegs to other restaurants, including Licorous and La Bête. Pettit is also working on a Delancey expansion called The Pantry, with Delancey pastry chef Brandi Henderson and friend Olaiya Land. In addition to cooking classes and dinners, they plan to host other squatting cooks and chefs who need a kick-start.

Of course, all this idealistic talk of kitchen incubation and culinary startups should be taken with the proverbial grain of salt. Of the half-dozen squatters we interviewed for this story, all agreed: Having a kitchen of your own trumps squatting any day.