A Discussion About Depression

Recent local high-profile suicides compel us to ask, what can we do about depression? n his “The Myth of Sisyphus” essay, French philosopher
Albert Camus calls suicide “the only serious philosophical problem.” Philosophy’s search for meaning in life
comes to a sharp halt when life is deemed unlivable.
And like many gravely serious problems, suicide is one we’d rather not talk about.

In his “The Myth of Sisyphus” essay, French philosopher Albert Camus calls suicide “the only serious philosophical problem.” Philosophy’s search for meaning in life comes to a sharp halt when life is deemed unlivable. And like many gravely serious problems, suicide is one we’d rather not talk about.

As lifestyle expert and frequent Seattle magazine contributor Kelley Moore learned, the price of our silence is high. In 2011, after struggling with undiagnosed bipolar disorder for years, she landed in a Connecticut psychiatric hospital for two weeks after she took too many pills. Though the facility had daily visiting hours, her stay was painfully lonely. She had one personal visit in two weeks.

“If I’d been in the hospital for cancer, or something else, people would have come to visit,” says Moore, who had been working in New York at the time. “But because it was a suicide attempt, people thought that somehow I had caused it.”

Moore felt alone, but she wasn’t; Seattle has seen several high-profile suicides in recent years. Ernie Pino, owner of a Seattle-based Spanish language marketing translation company (and longtime Seattle magazine society-pages columnist), took his own life on April 30, 2015, half a year after celebrated Washington winemaker Eric Dunham died by suicide on October 23, 2014. Lisa Dupar, owner of Lisa Dupar Catering and Redmond’s Pomegranate Bistro, lost her half-brother David to suicide in 2011, seven years after her father, Pete, reported to a hospital for monitoring after he experienced suicidal thoughts.

High profile or not, suicide awareness is rising. Nearly everyone knows someone who has lost a friend or loved one to suicide, or struggled with suicidal thoughts themselves, says Christopher Famy, M.D., a behavioral medicine psychiatrist and suicide expert at Swedish Medical Center. Nationally, suicide rates have been steadily rising since 2007. Though the increase in suicides committed by youths aged 10–24 has been well covered, the problem isn’t limited to the youth demographic. The majority of suicides are committed by adults 45–64, with four times more men committing suicide than women.

In terms of years of life lost, suicide is exceeded only by cancer and heart disease; it’s the second-leading cause of death in people ages 15–34, the fourth-leading cause for ages 35–44 and the fifth leading cause for ages 45–59. In 2015, an American died of suicide every 12.95 minutes. Most startling for our community, a government report ranks Seattle second among 33 metropolitan areas in attempted suicides.

Shame and Stigma
For something so widespread, suicide is incredibly hard to talk about, says Dupar. Society has reached a point at which depression is widely accepted; according to the Mayo Clinic, antidepressants are the second-most commonly prescribed drugs in the country, taken by up to 25 percent of the population. With this many people in the same proverbial boat, depression is becoming easier to discuss publicly. Despite rising rates, however, suicide is still relatively rare, accounting for just over 1 percent of all deaths in the U.S. The relative rarity of death by suicide makes it easy to think it could never touch your circle—it’s something that happens to other people.

Stigmatized, scary topics often go undiscussed, even in medical settings. In a study of primary care doctors, who write 62 percent of America’s antidepressant prescriptions, just over a third of depressed patients were asked about suicide.

Fear of the S word means people who are struggling or contemplating suicide may not reach out for help in ways others understand. Although Pino was open about his struggle with depression, the topic of suicide didn’t come up; at least not explicitly, says Rich Gray, Pino’s husband of seven years and partner of 24. “Because suicide is so shameful, if he ever talked about it, he couched it in language that wouldn’t scare me.” Had he mentioned the word “suicide,” Pino’s medical care may have taken a different course, one that could have—possibly—made a difference, says Gray. Seattle lifestyle expert Kelley Moore is speaking out about her suicide attempt in 2011. She felt isolated and doesn’t want others to feel the same way

Stop Signs
Though it’s normal for loved ones to rack their memories for unheeded warning signs in the wake of a suicide, often it’s difficult to predict who will attempt suicide, says Famy. Listlessness, social withdrawal and feelings of hopelessness can be red flags, but these signs can be difficult to identify and interpret, he says. What we do know: Untreated depression is the leading risk factor for suicide. Autopsies link some 90 percent of suicide deaths to a psychiatric disorder such as depression or schizophrenia. But connecting people to effective treatment for mental health conditions is complex. Some people don’t want treatment and reject medication, like Dupar’s half-brother David. Others, like Moore, struggle for years without an accurate diagnosis and treatment plan, says Famy.

And even the best treatment isn’t fail-safe. Pino was a model depression patient, diligently visiting top-notch medical professionals, exercising and eating well, but he never landed on a prescription that felt right. “He said his medicine felt toxic to him,” says Gray.

Another fact: The tipping point between a lethal and nonlethal suicide attempt is often the method chosen. When used for suicide, firearms are 85–90 percent lethal, says Famy. Pills, on the other hand, are lethal only 12 percent of the time, often because friends and family members intervene in time to save a life.

In fact, firearms are the top mode for successful suicide, used in 52 percent of suicide deaths. This speaks to a need for safe gun storage, says Famy. “Someone can have an impulse to die, but whether or not he succeeds can depend on whether he can access a gun at that moment.” Although there is a five-day waiting period to purchase handguns (which are used in suicides twice as often as other firearms), Washington has no waiting period for rifles or shotguns. 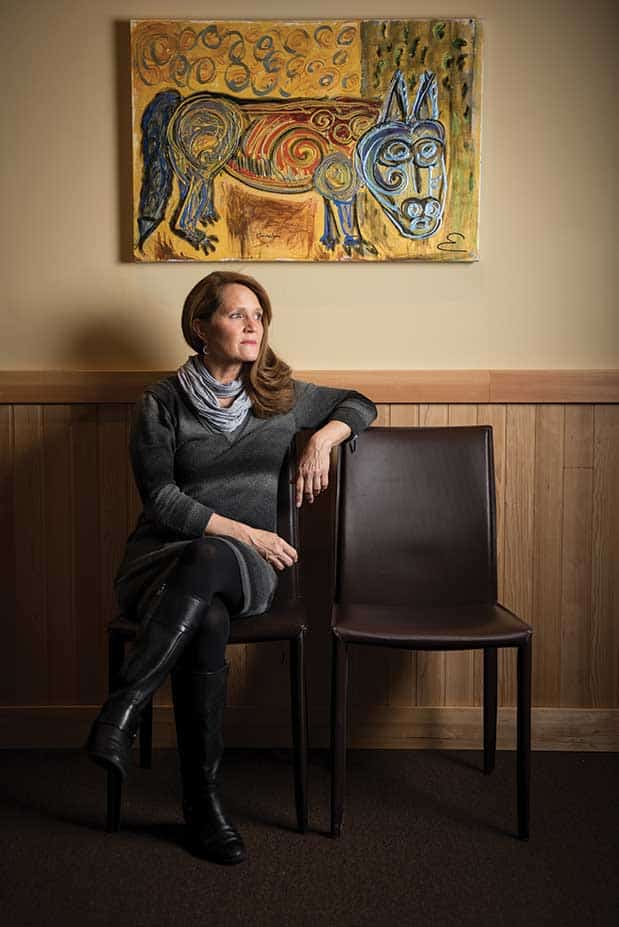 Redmond-based caterer Lisa Dupar lost her half-brother to suicide in 2011, and friend and winemaker Eric Dunham, whose artwork she is photographed with, in 2014

Simply asking a direct question, like “Are you thinking of suicide?” can begin a dialogue, Famy says.

And, he stresses, suicidal intent—when someone reveals a plan to commit suicide—is a medical crisis and should always prompt an immediate call to 911.

Genetic testing is also shining light onto this dark topic, helping inform medication decisions for better outcomes. A genetic test for cytochrome P450, available through Seattle-based Genelex and a number of other local labs, helps determine how someone will metabolize antidepressants. The goal is to pinpoint the right meds sooner and prevent a potentially life-threatening state called serotonin syndrome, when medications, such as antidepressants, cause an overbalance of serotonin in the body, which can lead to fever, seizures and in some cases, death.

Other genetic tests for depression are becoming more widely available. Research like the 2013 Psychiatric Genomics Consortium study identifying genetic variants for depression and other mental health disorders is helping to spotlight genetic biomarkers for depression—in other words, genes that can indicate a person’s hereditary risk for depression.

Above all, Moore wants others struggling with suicide to feel less alone than she did. She’s feeling better now, and she and others are planning a local annual event to help draw awareness and generate more conversation about the topic. But suicide (and depression) isn’t something that’s cured, she says. As a survivor, she knows she’s one of the lucky ones, but suicide will always be a part of her story. “If you don’t die from [a suicide attempt], then you just live with it every day. I would like to be part of the solution.” 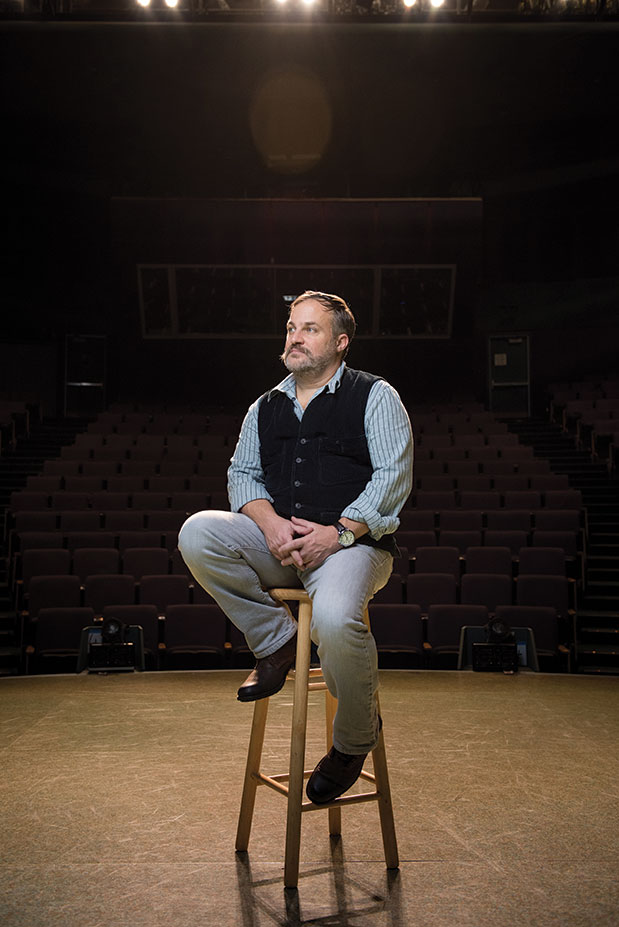 Local actor Rich Gray’s husband, Ernie Pino, was being treated for anxiety and depression but ultimately took his own life last April

Forefront
A University of Washington resource for health professionals and educators aimed at preventing suicide by increasing awareness of suicide warning signs and offering suggestions for how to help. intheforefront.org

Seattle Suicide Support Groups
Groups throughout Washington for those who have lost loved ones to suicide. suicide.org/support-groups/washington-suicide-support-groups.html