The petite Red Mountain AVA packs a punch when it comes to flavor—and diversity of wines. 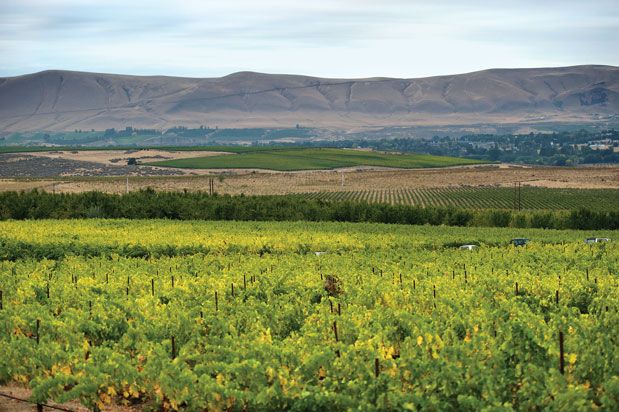 For years, Red Mountain has been known for its intense red wines, produced by wineries all over the state that gain high scores and fetch high prices. But as the 12-year-old American Viticultural Area (AVA) develops, people are also starting to talk about its growth, diversity of vineyards and uniqueness of terroir—right down to the smallest parts of the vineyards, called “blocks.”

Located within the Columbia Valley and the smallest of Washington’s winegrowing regions, the Red Mountain AVA was established in 2001, but vines were planted here as early as any region in the state. In 1972, Jim Holmes (co-owner of the 120-acre Ciel du Cheval Vineyard) and John Williams (owner of 84-acre Kiona Vineyards and Winery) settled on this hot, dry, barren hillside because it seemed like a promising place to grow grapes. This steep, southwest-to-northeast slope at the southern end of the Yakima Valley had never been planted—even by indigenous people. By 1975, the two hobbyist winemakers had planted 10 acres, and the first winery in the region, Kiona Vineyards and Winery, was bonded in 1980.

Now, with more than 40 vineyards, the 4,040-acre AVA has more than 1,300 acres planted with primarily Bordeaux varieties, including Cabernet Sauvignon, Merlot, Cabernet Franc, Petit Verdot, Malbec and Carinan, with 1,000 additional acres of vineyards or more planned. The soil of the AVA ranges from areas of various combinations of sand, silt and loamy soils, depending on how far up the hill the vineyards are from the river bed, to varying layers of “loess,” or windblown soils on top of glacial sediments from prehistoric floods.

Red Mountain’s gradual transformation and diversity were out in force at a “block party” last September. The event was hosted by the member wineries of the Red Mountain AVA Alliance.

From the first Red Mountain winery to the most recent addition, Upchurch Vineyard, and everything in between, the event showcased the diversity and vitality of the growing community.

Tasting wine on Red Mountain is fascinating—all the tasting rooms are within about a mile of each other, but the range of experiences is growing by the year. Everything seems to be represented: You can start at the top of the hill, at Col Solare (which is open for special events and by appointment, so call ahead; colsolare.com), where you can look down over the lower Yakima Valley from this gorgeous and well-appointed Italianate tasting-room villa, owned by Chateau Ste. Michelle and the multi-generation winemaking Antinori family, with its big, bold super-Tuscan reds. At Hedges Family Estate’s elegant tasting room, wander the formal gardens and biodynamic vineyards, and taste its excellent Cabernet Sauvignon and red blends. At Cooper, you can chat with Neil Cooper, owner and winemaker, in his industrial-style barrel room and taste his estate-grown Chardonnay.

At the Red Mountain Block Party, many vineyards and wineries that usually aren’t open to the public had representatives who poured barrel samples or other wines, such as Chris Upchurch, winemaker for DeLille Cellars, whose Grand Ciel Vineyard is well established. Chris and his wife, Thea, now have Upchurch Vineyard, the first LIVE-certified (Low Input Viticulture and Enology) vineyard on Red Mountain.

Other wineries to look for include the ultramodern Fidelitas tasting room; Hightower Cellars’ LEED-certified winery and tasting room; and beautiful views from Tapteil Estate and Terra Blanca Winery & Estate Vineyard. Brent and Sarah Goedhart’s beautiful 100 percent Red Mountain Syrah is picked from the vineyard right outside their door, Bel’ Villa Vineyard, which is owned by Sarah’s parents, Tom and Anne-Marie Hedges of Hedges Family Estate. They use grapes from an “early pick” for brightness and acidity, and a later pick for gamey flavors, deep fruit and alcohol, and only 10 months on oak—all of which blends beautifully into this elegant and complex Syrah.

This wine—made from Kelly and Tim High-tower’s own vineyard—is the culmination of their efforts, with a balanced blend of all five Bordeaux varieties: Merlot (42 percent); Cabernet Sauvignon (34 percent); Cabernet Franc, Malbec and Petit Verdot (all 8 percent). The intensity of dark cherry fruits is balanced by the silky texture of this wine.

Cooper now has an estate vineyard on Red Mountain, and this Chardonnay shows off the rich pear fruit, with a bit of spice and butterscotch. Barrel-fermented and then aged in new French oak for 10 months, this 100 percent Chardonnay is a lush but bright white wine.

Winemaker Steve Lessard and winegrower Randall Hopkins work together to create red wines from the Corvus Estate Vineyard. With a winery and tasting room in Walla Walla and a vineyard on Red Mountain, their 100 percent Petit Verdot is distinct, with an intense inky purple color, floral aromas, and a lingering finish of blackberry and vanilla.

Grown on Ed and Eve Shaw’s estate vineyard, this wine is aged for at least two years in oak barrels, then kept from release for three to four years after harvest to calm the intensity of the fruit. A blend of 63 percent Cabernet Sauvignon, 25 percent Cabernet Franc and 12 percent Merlot, this wine has found many fans for its smoke and cherry intensity.