Doctor As Patient: Range of Motion 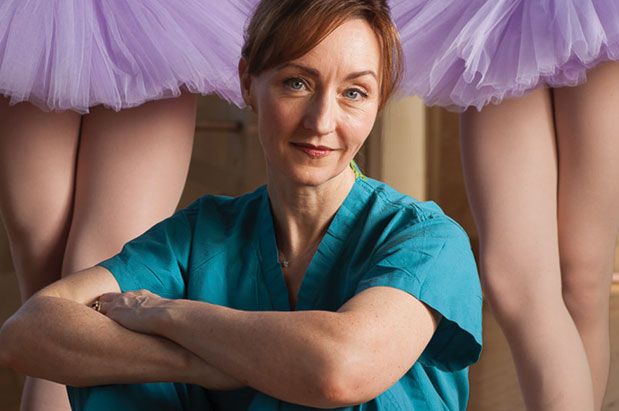 !–paging_filter–pBelieve it or not, says Group Health orthopedic surgeon Nancy Kadel, M.D., surgery and dance have more similarities than differences: “You can’t learn surgery by reading a book, and you can’t learn dance by someone telling you what the steps are. You kind of learn kinesthetically in your body—then when you hear the music, you move.” Surgery does come with an additional perk, however, says Kadel, laughing: “I have power tools!” When she was felled by a stress fracture in her ankle while practicing a dance routine, she had already decided against becoming a professional dancer and had headed back to college, but she hadn’t yet hit on studying medicine. The ankle was a turning point in her career ambitions. Before that, she had already performed with a few dance companies, including Martha Graham, and this was the most serious injury she’d ever sustained. “It wasn’t career-ending, [but] it did help shape what I chose to do later.”/p
p“It was really important for me to be in those [dance] pieces,” she says, recalling her drive and ambition. So after she injured her ankle, she was referred to a doctor who specialized in treating dancers. Rather than tell Kadel she couldn’t perform, he worked with her to figure out how she could alter her movements to take the pressure off the ankle and otherwise camouflage the injury. “ That amount of compassion and care for how important it was for me to be in that piece [stayed with me]. He helped me figure out how to put make up on [the injury] so it wouldn’t show, and changed [some of the movements] to the other foot.”/p
pAfter that performance, Kadel had a chance to let her ankle recuperate and while doing so, she considered medical school. She’d been interested in science since childhood, so it was a natural choice. She began her practice in 1997, and in 2011, she launched Seattle Dance Medicine, a free clinic at Group Health aimed at screening and treating dancers of all abilities and age groups. The venture is a perfect fusion of her two favorite things. Though the clinic is for dancers, Kadel’s Group Health patients include anyone with foot and ankle problems./p
pShe draws upon her earlier experience with her dance doctor when she treats her own patients, who are often worried about what their injury means to their performance, just as she had been. “I think you have to have an open mind, and you have to be sensitive to the way dancers think. Telling them they have to stop moving, or that you have to put them in a cast, is not good.” Oftentimes, patients are relieved to finally land in Kadel’s understanding care after getting unsatisfactory opinions from other doctors. The key difference, says Kadel, is learning about the dancer’s specialty—she even has dancers bring in their shoes—in order to better understand their movements and how their injury might affect them. “I saw a young dancer who does competitive lindy hop; she came to see me for, like, a fourth opinion. She said, ‘I’ve seen so many doctors, and no one has even asked me what I do.’” It’s also a learning experience for Kadel, who has no experience in many of the dance styles her patients practice, such as Irish dance, which she discovered has a big local population./p
p“You have to be very dedicated, and you spend your days and nights around people who are also very dedicated,” she says of the similarities between dance and medicine. “Dancers are very smart; you have to memorize a lot of things, [such as] a whole evening of steps; there’s a lot of attention to detail, which is very much like medical school and learning anatomy.” “ There’s a lot of art in medicine; you’re bringing together pieces of the puzzle. There’s less blood in dance, but luckily [blood] never bothered me!” ✚/p
pnbsp;/p
pa href=”http://www.dancindoc.com/freeclinic/new_index.php“DROP IN SEATTLE DANCE MEDICINE CLINIC/abr /Free and open the second Sunday of each month, 2 – 5 p.m. at the Group Health physical therapy gym (Capitol Hill, 201 16th Ave. E);a href=”http://www.dancindoc.com/freeclinic/new_index.php” dancindoc.com/a/p

!–paging_filter–pAdd another clinic to the growing list of neighborhood health care providers that are reshaping the health care landscape, partly in response to the establishment of the Affordable Care Act. a href=”http://www.hopecentralhealth.org“HopeCentral, a pediatric and behavioral health clinic/a, opened its doors in Rainier Valley in March; in addition to filling a need for pediatric services…

!–paging_filter–pNeighborhood clinics from Virginia Mason to Swedish have become a common sight around Seattle, providing easy access for many residents for basic health care needs—now Group Health is getting in on the act but with a twist: Partnering with Bartell Drugs, the medical group is launching CareClinic: Group Health at Bartell Drugs, putting its clinics…