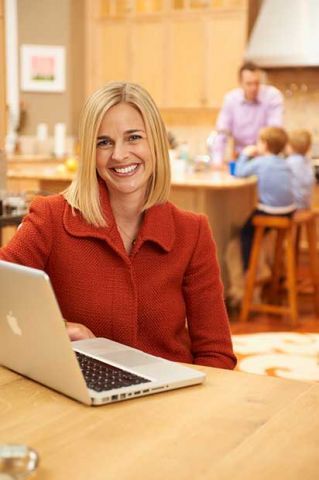 !–paging_filter–pAfter navigating medical school, charting a career and establishing a successful pediatric practice, Dr. Wendy Sue Swanson had certain expectations about having children. “I had idealistic visions of motherhood,” she says./p
pThen, during an ultrasound conducted 12 weeks into her first pregnancy, reality hit. “There was this little guy bopping around, with his arms and legs moving,” she says, “and my first reaction was ‘What is he doing? I didn’t tell him he could do that!’ He was going to be his own person.”/p
pSeattle resident Swanson, 38, and her husband, Jonathan, who is also a physician at Seattle Children’s, now have two boys, ages 3 and 5. They share parenting duties and both are deeply involved in raising their boys. Like many working mothers, Swanson struggles to balance her career and home life. She sees patients at The Everett Clinic, writes the popular Seattle Mama Doc blog, is an official spokesperson for the American Academy of Pediatrics and sits on the board for the Mayo Clinic Center for Social Media./p
pIt hasn’t been easy. Swanson had complications in both her pregnancies, resulting in partial bed rest being ordered during the first, and full bed rest in the second, when her first son was not yet 2 years old. “It was tough,” she says, “especially the second pregnancy. I couldn’t pick up my first son or take care of him like I would have preferred and enjoyed.”/p
pBut the challenges and joys of raising her own children have made Swanson a much better pediatrician. “Being a parent is a second residency, another level of education,” she says. “I really get it now—how parents will do anything to protect their children. How desperately in love we are with these little guys. How crazy we can become in trying to do the right thing.”/p
pIt’s much easier for Swanson to empathize with parents now that she has her own children./p
p“I love being a parent more than anything,” she says, “but after the 15th tantrum in one day, do I get frustrated? Heck, yeah! Do I worry about that high fever, even though as a pediatrician I know it’s gonna be OK? Absolutely. And I agonize over leaving my younger son, as he desperately clings to my leg. Our experience informs us. I listen to parents differently now./p
p“As parents, we all want the same thing: to see our kids stay safe and healthy, and we’re all doing the best we can to make that happen. I understand that perspective so much better now, and it makes me a better doctor.”/p
pSwanson says that she has also learned a lot from her children. “My sons are in control of their development,” she says. “I’m there to support them, and my job is to let them evolve. If you listen and pay attention, your kids will guide [you] into beautiful decisions.” ✚/p