With a number of Italian-style liqueurs, Washington distillers are bringing la dolce vita 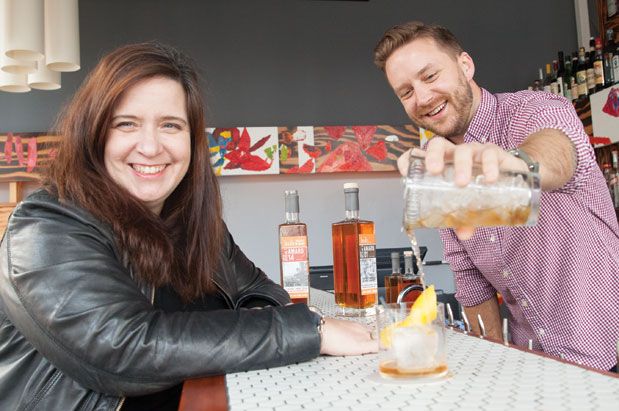 !–paging_filter–pRenowned Russian poet Anna Akhmatova once said, “Italy is a dream that keeps returning for the rest of your life.” This sentiment is echoed by most who have visited, or even dreamed of visiting, the boot-shaped country, famous for its wine, food, art, poetry and liqueurs. It’s also the dream that recurs for many of our local distillers, who show their love by producing Italian-style liqueurs. brbrMhairi Voelsgen, owner and distiller at Woodinville-based BroVo Spirits, had learned about amari (Italian bitter-backed, but sometimes slightly sweet digestifs consumed after dinner and usually boasting a wide range of herbs and spices), during four months of studying architecture in the Trastevere neighborhood of Rome. brbrBut her BroVo amaro line was born out of more immediate concerns: a batch of rhubarb liqueur that didn’t work out. “We decided not to release it and wondered what to do with it,” Voelsgen says. “Bartenders in the Seattle area were quick to suggest that we consider making amaro.” Now, she has 17 different varieties, each made in conjunction with a different bartender, covering a range of flavors that could stand strong on any amaro shelf in a store in Italy.brbrFor Skip Tognetti, owner and distiller at Letterpress Distilling in SoDo, making a version of the classic Italian lemon liqueur limoncello evolved out of personal history. He’s been to Italy about 20 times, mainly to visit his grandparents. His grandfather owned a liquor store in Rome about half a mile from St. Peter’s Square, and he sampled the sweet liqueur at the family’s table as a boy. Tognetti thought crafting a well-made version “would be a nice homage to those memories,” he says. He followed a path taken by most local distillers, focusing on high-quality ingredients (much like an Italian would) and finding a well-balanced result; one full of lemon flavor and balanced between sweet and strong. He also decided to take a tip from the traditional Italian practice of using honey instead of sugar, which gives a smoother sweetness.brbrLike many Italian small farmers, David O’Neal’s decision to make nocino, the lush Italian green walnut liqueur, was made for a more practical reason. A partner and distiller at Sidetrack Distillery in Kent, O’Neal wanted to make use of the great big walnut trees on the family-owned farm. “We always wanted to do something more creative with our produce.” Using the walnuts to make nocino fits in perfectly with their plan.brbrBeing a deep devotee of Italian liqueurs (and Italy; I’ve been 10 times now, including a seven-month stint with wife and dogs), I couldn’t be happier about all these fresh, local Italianesque products. But I’m glad they’re being released now, because not too many years ago, the more obscure Italian liqueurs would have gathered dust on shelves. Thanks to the cocktail explosion of the past 10 years, people are more accepting of intriguing and lesser-known ingredients and have more developed tastes. So even if you can’t take a trip overseas to Italy today, you can experience a little dolce vita, Washington style, in the comfort of your home or neighborhood bar./p
pstrongspan style=”color: #ff6600;”Five to Try Now/span/strongbrThese locally distilled spirits capture the soul of Italy in a bottle. They are all worthy of sipping solo, but also play well in cocktails/p
pimg src=”/sites/default/files/newfiles/0414_italianliqueurs.jpg” style=”vertical-align: middle; margin: 10px;” height=”398″ width=”600″brstrongThe BroVo Spirits Amaro No. 1, $45/strongbrCreated in conjunction with Seattle bartender John Ueding (craft spirits manager for Click Distributors and formerly of Trellis and Monsoon East), this inaugural amaro release from BroVo is perfectly balanced, with citrus, clove, cinnamon and pepper all sharing center stage. Sweetened with agave nectar, it’s lightly bitter. Distillery: 18808 142nd Ave. NE, Unit 3B, Woodinville; a href=”http://www.brovospirits.com” target=”_blank”brovospirits.com/a brbrstrongBroVo Spirits Amaro No. 14, $45/strongbrMade with a recipe created by Chicago bartender Mike Ryan, this amaro recently won Double Gold at the 2013 New York International Spirits Competition. It has an intriguing flavor profile, with a nice bitterness swirling around chocolate, as well as cinnamon, sarsaparilla and other herby delights, all sweetened by agave nectar. Try it neat, and then again with ice to test the different flavors that emerge. Distillery: 18808 142nd Ave. NE, Unit 3B, Woodinville; a href=”http://www.brovospirits.com” target=”_blank”brovospirits.com/abrbrstrongSidetrack Distillery Nocino, $29.90/strongbrMade in a traditional manner from green walnuts (green so that they can be harvested, as distiller David O’Neal says, “before the squirrels want them”), this nocino has a wonderfully rich, nutty taste and a nice, satisfying muscular undercurrent. It’s a nocino that any older Italian gentleman would be happy to sip at his local café while watching the sun set, over ice or neat. Distillery, tasting room and family farm: 27010 78th Ave. S, Kent; a href=”http://www.sidetrackdistillery.com” target=”_blank”sidetrackdistillery.com/abrbrstrongDry County Distillery Black Rope Anise, $29.94/strongbrWhile Italy certainly isn’t the only country to make anise-flavored liqueurs, in my mind it makes the very best, and all others should be held up to Italy’s versions. Black Rope Anise contains no sugars (unlike most other liqueurs) and has a lighter body and mouthfeel, but balances that with a strong anise taste that shines bright in every sip and hints of sweetness from the botanicals. It’s a boon for licorice lovers, best served over ice. Distillery and retail store: 521 Delta Ave., Marysville; a href=”http://www.drycountydistillery.com” target=”_blank”drycountydistillery.com /abrbrstrongLetterpress Distilling Limoncello, $42.53/strongbrA lovely golden color, this lemon liqueur has an amazingly approachable lemon taste (coming from, as distiller Skip Tognetti says, “a ridiculous amount” of lemon zest) and a subtle strength that keeps things in line. The use of honey as a sweetener brings a silky smooth mouthfeel. Serve this over a big ice cube. Distillery and tasting room: SoDo, 85 S Atlantic St., No. 110; a href=”http://www.letterpressdistilling.com” target=”_blank”letterpressdistilling.com/a/p