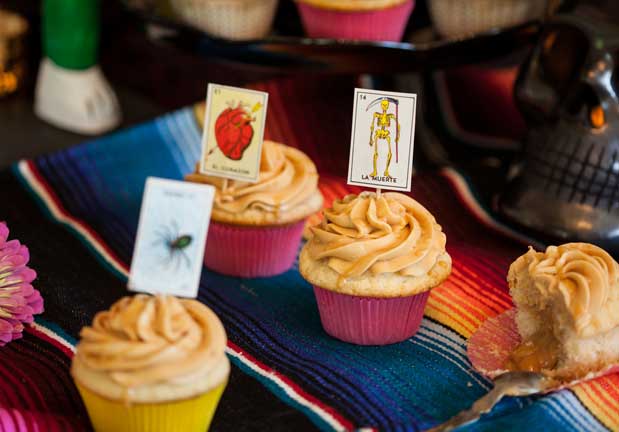 This cupcake is made with one of the most delicious confections I have even eaten, cooked condensed milk, aka dulce de leche or milk caramel. It’s so good you might catch yourself eating it by the spoonful right out of the can. The recipe is very simple, but takes some time and a keen eye on the pot.

So, start this recipe the night before. Simply take the paper label off two 14-ounce cans of sweetened condensed milk (do not use the cans with a ring-style pull top) and place them into a large stockpot filled with water. The water must cover the tops of the cans by 1 inch for the entire cooking process. Bring the water to a low boil. After 90 minutes, carefully remove one can from the water with tongs and set aside to cool (mark this can with a “90,” so you don’t get them mixed up). Continue to cook the other can for another 2 and a half hours (4 hours total). Check the water level every 30 minutes to be sure that it is always covering the top of the can. After 4 hours, shut off the burner and let the can cool in the water overnight. Now you are ready to bake.

Cake Batter (this is our classic vanilla batter, found on page 182 of Trophy Cupcakes & Parties!)

1 tablespoon plus 1 teaspoon vanilla (Mexican if you have it)

In a large bowl, sift together the all-purpose flour, cake flour, baking powder and salt. Set aside.

Put the milk, half-and-half and vanilla in a large measuring cup with a spout. Set aside.

Put the butter and sugar in the bowl of a stand mixer fitted with the paddle attachment and beat them at low speed until the mixture is smooth and creamy, about 1 minute if the butter is soft. If the butter is cool, it will take longer. With the mixer at its lowest speed, add the eggs, one at a time, mixing well and scraping the bowl after each addition, and waiting until all traces of each egg has disappeared before adding the next one. Add the dry ingredients in three parts, alternating with the wet ingredients in two parts. Keep the mixer at the lowest speed and mix each time just until the ingredients are combined. When everything has been added, scrape the bowl and paddle one more time, and stir the batter just until it is smooth. If the batter seems fluffy, let it rest for 15 minutes and stir gently before using.

Fill the muffin cups three-quarters full and bake until the tops are firm and a cake tester inserted in the center of a middle cupcake comes out with just a few crumbs, about 20 minutes. The cupcakes should still be very pale and turn golden only around the edges. Let the cupcakes cool for 5 minutes in the tin before removing to a rack to cool completely.

In a stand mixer fitted with a paddle attachment, cream the butter. Start with the mixer at its lowest speed, then gradually increase the speed, using a rubber spatula to scrape the bowl as needed, until the butter is light in color, perfectly smooth and makes a slapping sound as it hits the sides of the bowl. If the butter is soft, this should only take 30 seconds, but if the butter is cool, it can take a couple of minutes.

Add the sugar one cup at a time and mix at the lowest speed until fully incorporated before adding the next cup. When all the sugar has been added, scrape the paddle and the bottom and sides of the bowl. Add the vanilla and salt, and beat at low speed for 15 seconds, then increase the speed to as high as you can without making a mess, and whip the buttercream until the mixture is perfectly smooth, creamy and light, about 5 minutes. Stop the mixer once or twice to scrape the bowl and paddle, then continue beating. Now add the can of 4-hour condensed milk and beat until incorporated and light and fluffy. At first the buttercream will appear to soften, then it will stiffen and increase in volume.

Use right away, or store in an airtight container in the refrigerator. When you’re ready to use it, let the buttercream come to room temperature if possible, then put it back in the stand mixer and use the paddle attachment to beat it until it is creamy and stiff again.

Go back to Entertaining: A Day of the Dead-Themed Fiesta