Spring pairs perfectly with brunch fare, especially with a well-made drink to match 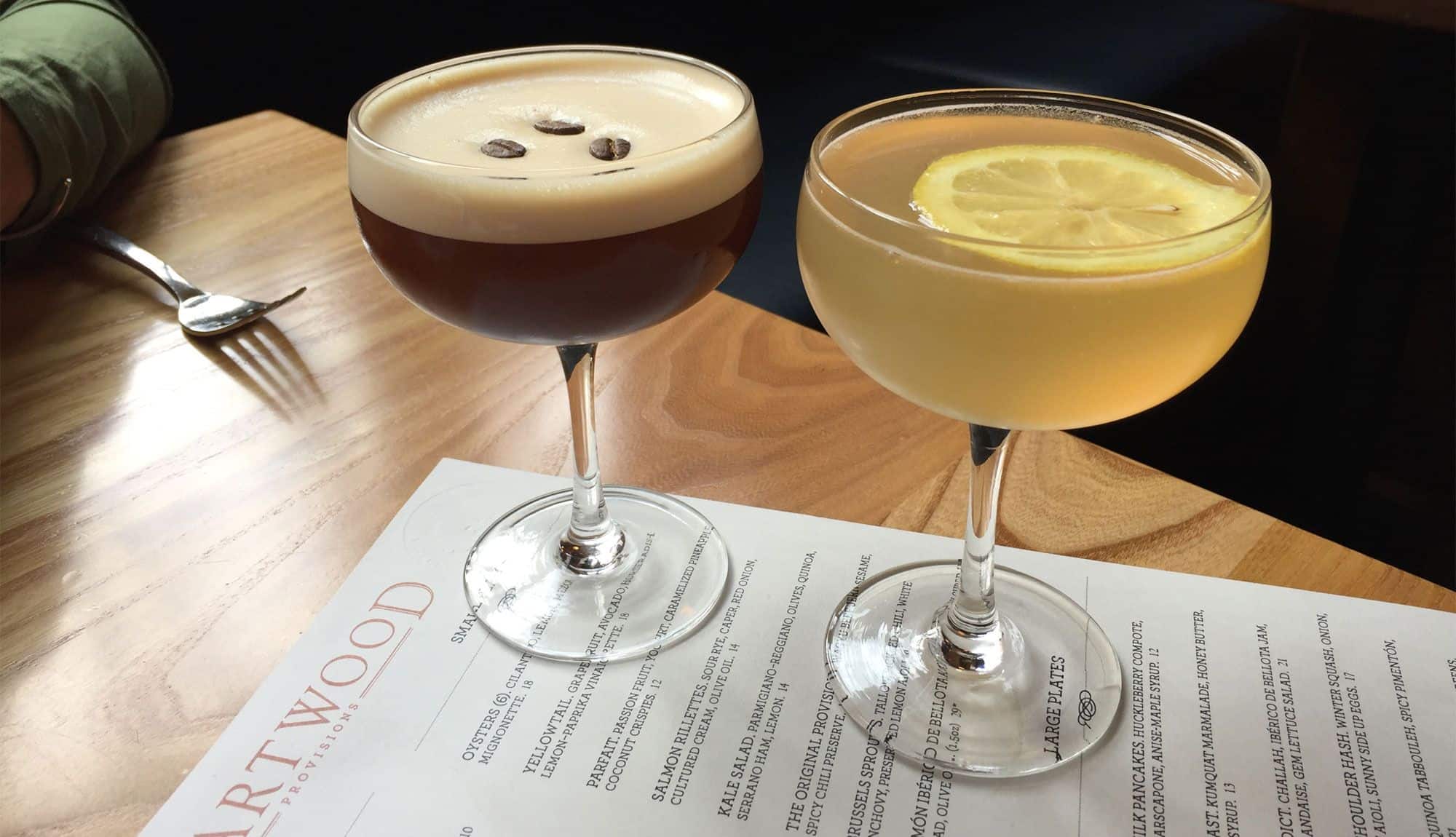 It feels as if spring may finally be here in earnest, with blue skies and warmer temperatures. There’s something about spring that screams: brunch! And while the mighty Mimosa is nice, our local cocktail slingers make a wider range of excellent late-morning mixes, highlighted by the 10 below.

Black Hole Sun, Heartwood Provisions: It’s no surprise that this downtown spot right on the edge of Pioneer Square has delicious drinks on its recently-unveiled brunch menu — it’s developed a deserved reputation for food-cocktail pairings. While there are a number of virtuous choices, the Black Hole Sun is tops, and perhaps my current favorite brunch cocktail overall. Plantation dark rum, coffee, allspice liqueur, and pineapple deliver cool coffee-ness with spice and rum notes and a waft of the tropics, topped with three coffee beans. It goes nicely with their Benedict, which has Jamón ham and Jamón ham jam (they can make it veggie with a lush tomato jam instead), on top of challah and with a pimento hollandaise.

Meletti Flip, Gather: The flip is a morning drink of legend, thanks to the addition of an egg white (or, sometimes, a yolk, or a full egg – see the Banana Flip below), which of course connects it to a whole league of a.m. dishes. At downtown Ballard’s Gather, their flip is made with solely the egg white, herbal Italian hit Meletti amaro, Giffard peach liqueur, orange juice, and Spanish sparkling wine Cava.

1.21 Gigawatts, Derby: Down in SoDo you can get brunch and check out a bunch of cool and classic cars at this Ethan Stowell stop. This drink provides a shout out to a classic car of sorts (the DeLorean), a definite movie classic, and all the classic bubbly morning drinks out there, thanks to its combination of Italian sparkling wine prosecco rev’d up with gin, maraschino liqueur, and Bitter Truth violet liqueur.

Lost Again, Cursed Oak: Some brunches, even in springtime, are slightly sleepy affairs where we a pick-me-up is necessary. On those days, a drink like this Belltown bar’s “Lost Again” can come in handy, thanks to the addition of Bedlam Coffee Cold Brew. Adding Espolon Anejo tequila, herbally Amaro Nonino, Jerry Thomas Original bitters, and a little orange, and you’ll be perking up in no time.

Big Daddy Milkshake, No Bones Beach Club: Ballard’s vegan tiki temple has a number of tasty late-morning dishes, including a nicely-spiced Huevos made with scrambled tofu, grilled peppers and onions, house-made crispy chips, charred tomato salsa, and other delectables. To balance the spice – and just to start the day right – this “milkshake” is a cooling, creamy, tall stunner, with vanilla vodka, coffee liqueur, coconut milk, and a splash of cola.

Pamplemousse, St. John’s Bar and Eatery: Fruit juice is a breakfast standby, and at this friendly Cap Hill watering hole, it’s cranberry and fresh lime juice – with grapefruit vodka and triple sec. The cocktail goes well with their version of the Croque Monsieur, the lush French breakfast sandwich originating in the early 1900s.

Lemongrass Bloody Mary, Super Six: Along with the Mimosa, the Bloody Mary may be the most ordered brunch drink, and there are endless varieties available in Seattle – so many they almost deserve their own article. In Columbia City’s Super Six, they make their Bloody with Chinese spicing, including gochujang (a fermented red chili paste), black vinegar, togarashi salt (more red chili-ing), and lemongrass-infused vodka.

Banana Flip Phone, Brimmer and Heeltap: Our second flip, from this neighborhood place within the Fremont and Ballard boundary stretch, goes the whole egg route. Together, along with their Belgian waffles (topped with berry syrup), it makes for a delightful duo. Other drink ingredients include dark rum, banana and walnut liqueurs, and whipped cream — all of which seem like they might be tasty on waffles, too.

Grapefruit Radler, No Anchor: The Radler is a German mix dating back to the early 1900s (the name stands for “cyclist,” and it’s often lemonade and beer), but at Belltown’s awesome No Anchor, they make it with fresh grapefruit juice, IPA, and two singular ingredients: Campari and Love (just check the menu for proof). It’s a super-refreshing eye-opener, with the grapefruit’s vigorous citrus and a breath of bitter from the Campari. If you’re feeling dehydrated, this is for you. I’d check your hunger as well by ordering up the wild mushroom hash, topped with two eggs.

First Light, Claret: Just opening in the last weeks in Wallingford (utilizing a bit of the space from Heavy Restaurant sibling Thackeray), Claret has a wine focus, so no surprise that they feature a beautiful bubbly brunch choice, made with prosecco, lemon, and pineau de charentes, a charming French fortified wine aperitif. Having one of these sparklers with profiteroles stuffed with lemon-scented pastry cream is a divine day-starter.