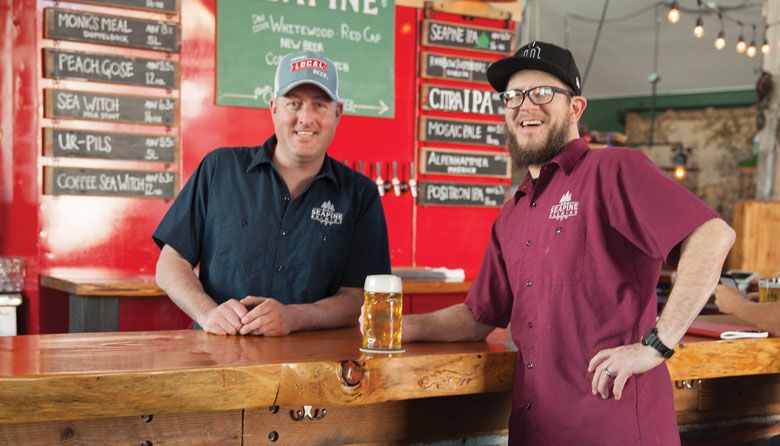 Topping two of our best of beer categories is no small feat, but those winning brews represent just a small part of Seapine Brewing’s award-winning beer arsenal. In large part, that’s why I dubbed it our Brewery of the Year.

On weekdays, the after-work crowd packs the always-busy, beer-only taproom to sip away the troubles of the day, proving that Starbucks employees slurp something other than lattes and macchiatos (the corporate headquarters is just two blocks away). On weekends, you’ll share space at the large communal tables with fellow beer pilgrims, who come to worship the beers and perhaps enjoy a Seattle Dog (grilled onions, jalapeños and cream cheese) from Chavoya’s Hot Dogs, which often has its cart parked out front.

Owner/brewmaster Drew Colpitts studied brewing sciences at University of California Davis and spent time working for Gordon Biersch Brewery Restaurant, among other breweries, before opening Seapine Brewing in 2012. Today you may spot him at the brewery hoisting a pint of his beloved Positron IPA, or perhaps one of his experimental creations.

You can find the beers on tap at various beer-focused restaurants and bars around the area, but a trip to the brewery and taproom in SoDo guarantees you a wide selection of beers, including our Best of Beer winners Mosaic Pale Ale and Rainbow Suspenders Double IPA. SoDo, 2959 Utah Ave. S; 206.682.7985; seapinebrewing.com; all ages