Welcoming some visitors to town this summer? Start them off with a cocktail. 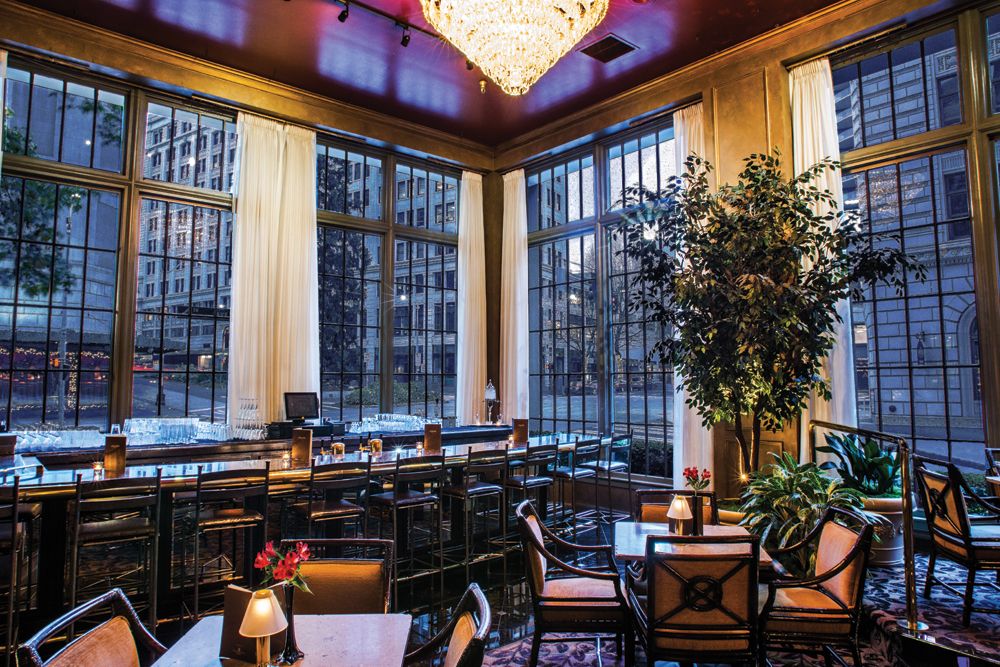 With the annual vacation season right around the corner – which means friends and relatives coming to town, wondering where they might want to stay – it’s good to know which hotels in town have swell bars. Because you wouldn’t want to leave your visitors without a cocktail, right?

Hotels bars have been making a comeback recently. In my mind, a good hotel bar needs to have tasty drinks, a vibe that’s memorable and individual, and be a spot where both people passing through and locals feel comfortable within. The below five – four newer, one renowned – all fit the bill.

Rider, Hotel Theodore: Opening at the end of last year in downtown Seattle, if you walk in in via the Pine Street entrance you might not realize this was a hotel bar and restaurant until you headed to the restroom through the lobby. The almond- and apple-wood open fire, the leather accents, the wood floors in the bar area all provide a small whiff of water-side glamping, underscored by the meat and fish food menu, which includes plentiful seafood platters. The drinks from Ariane Vitale and the rest of the bar staff really shines, too, and include numbers like the CDT, with bourbon, Italian herbal amaro Averna, sweet vermouth, Peychaud’s bitters, and absinthe. Getting a neat pour of their house-made bourbon (crafted with Sodo’s 2bar Spirits) isn’t a bad idea, either.

Zephyr, Embassy Suites: Though part of a hotel chain, this Pioneer Square bar (opened just about two months ago) has plenty of local roots thanks to the Local Libations section of the menu, which features drinks designed by Jessie Poole and the wonderful folks at E. Smith Mercantile, utilizing a lot of their house bitters and tinctures. The Boat House is a good choice, with Washington-made Chambers Bay straight bourbon, Amaro Nonino, Tawny port, and E. Smith’s smoked bitters, served on a big also-smoked ice wedge. Guests, locals, train-travelers stranded by Amtrak, and stadium visitors are already flocking into this deco-esque spot which hearkens toward a golden age of travel atmosphere. There’s good snacking, too (the shishito peppers with smoked salt match the above drink well), and a few larger plates.

The Nest, Thompson Hotel: Coming up on its one-year anniversary, and perched not too far from the market, this top-of-the-building bar has fantastic views over the sound and city. Admittedly, the view and location make it a mighty popular spot, so perhaps not best for quiet cuddling. But with visitors in town, it’s a nifty place to sit and see the expanse of scene and the scenery. The drinks are well-made, too. Take the Let Saigons Be Saigons (as the menu proclaims, “It’s kind of like a Gimlet”), with St. George Botanivore gin, a lime leaf cordial, and fresh lime – it’s a nice sunshine sipper with a comfortable nod to the classics. There are snacks, too, like grilled tofu with pickled cucumber relish for the veggies and confit boar ribs for the carnivores.

Moxy, Moxy Hotel: I’ve been in many hotel bars, but this if memory serves is the only one where the check-in counter is the bar. Admittedly, it’s this way at all of Marriott’s Moxy Hotels, but they also give everyone a drink  – the fun Got Moxy Cocktail made with Bacardi’s Dragonberry rum, lime, black cherry syrup, and cherry bitters – when checking in. Though part of a chain, this South Lake Union Moxy outpost has its own singular persona, a sort-of cozy northwest den theme, with a lounge area boasting big rugs, low-slung comfy chairs, a long couch with a Kurt Cobain and other pillows, lots of games, and a dynamic wooden art piece with a row of axes stuck in it. There are locally-inspired drinks, too, like the South Lake Union Tea with Sodo’s Glass Necar vodka, Earl Grey syrup, and lemon. It’s all looked over by Captain Jerry (also known in the neighborhood as the Mayor), an amiable character who’s been working in the Seattle hospitality industry since ’82.

Oliver’s, The Mayflower Park Hotel: Seattle’s legendary downtown hotel bar, Oliver’s has been around longer than all of the above put together, serving up drinks and food and fun since 1976. And while some things have changed, some have remained the same, starting with its award-winning Classic Martini, made with Bombay Sapphire gin (you can go vodka, but in a hotel this enduring, I wouldn’t – it seems indecent), Martini & Rossi dry vermouth, and vermouth-marinated olives. While you have to have a Martini for your first drinks, if sticking around for two, try their Bergonian cocktail, with Pioneer Square-made Copperworks Gin, Cointreau, creme de cassis, floral liqueur Esprit de June, lemon juice, red wine, and Italian bubbly Prosecco. It’s named for the space’s earlier incarnation as the Bergonian Hotel, which traces back all the way to 1927.