The cafe’s third location is softly open for cascara chocolates and perfect cappuccinos. 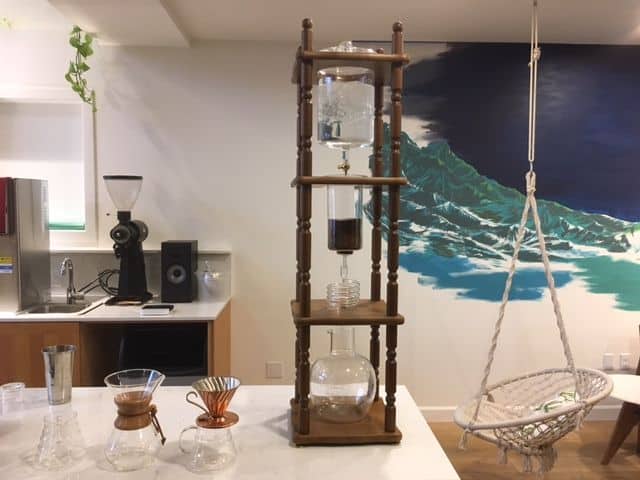 “We’ve paid very little attention to telling a story,” says Sebastian Simsch from a light-filled window seat at the new Capitol Hill location of his Seattle Coffee Works empire. He hasn’t bothered with buzzy marketing terms or selling the café as a lifestyle brand. Instead, he and his staff, both at the original downtown location and the second shop in Ballard, have been doing what matters: building relationships with coffee farmers, roasting some damn fine coffee, and making what may be the best cappuccino in town.

Ten years in, Simsch is now ready to tell a story—but it’s coffee’s story he wants to tell, not his own. The vintage-accented Capitol Coffee Works, which is open softly now and will have a grand opening May 29, is an ode to coffee, in all its fruity glory. Here are five reasons you should swing by for a cup this week:

The coffee you’re getting is the fairest fair trade on the market.
The company recently published what they’re calling an authenticity report, which gives the exact pricing they pay coffee farmers per pound. Much of the trade is direct, done with farms they visit annually. These prices, according to core team member Melanie Mazza, can be a dollar or two over even fair trade prices.

You need to try cascara.
And I don’t mean Starbucks’ cascara latte, which is made with cascara syrup and far too sugary. Cascara, in case you haven’t been paying attention, is the dried coffee cherry—the fruit that surrounds the coffee seeds (beans). It’s normally a byproduct that’s wasted or composted. But now, we’re wising up to how fruity and delicious it can be. Simsch’s team is making super small batches of chocolates, in Capitol Coffee Works’ upstairs kitchen, made with cascara. It’s also steeped into tea, lightly sweetened and mixed with sparkling water for a truly refreshing Cascara Fizz. And Simsch says they’re experimenting with a cascara mocha as well.

You can leave your cash at home.
That’s right: this location’s payment system is fully credit card-only, and tip-free to boot. Prices were raised May 1 at the other locations as well, and all three have foregone the traditional tipping system in favor of paying employees consistent, higher wages. No service charge. No Square tip guilt.

Coffee tech has gotten way cool.
This goes beyond the fancy Kyoto cold brew dripper you see at the end of the bar—though it does look neat (and make killer cold brew). Pay close attention to the Modbar espresso machine, which lives mostly under the counter, boasts “improved ergonomics,” and extracts wonderful espresso.

There’s no reason to get up.
From the table, that is. Capitol Coffee Works isn’t the first coffee shop in town to institute table service, but it’s the first where you can order a latte from a macramé swing, so there’s that.

“We feel like coffee is not done at all,” says Simsch. “This is day one. The lifestyle business is going to come and go. Right now, coffee is cool. Ten years ago, coffee wasn’t cool. And in 5 years, it may not be cool again. But guess what? We’re still going to be here.”

Visit Capitol Coffee Works at 907 E Pike St. There’s no sign yet, but if the lights are on, go on in.