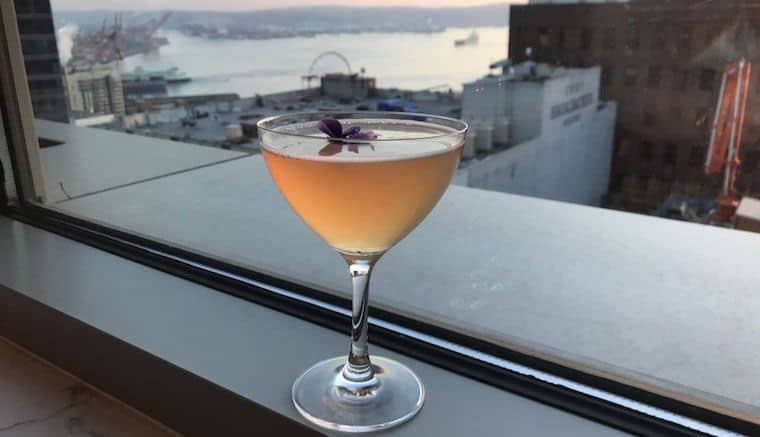 One of the welcome cocktail trends flowing into the modern drinking world hasn’t been about a specific drink, ingredient or style, but about a type of bar: hotel bars. For years, most (not all, but most!) hotel bars have been more about serving their important function of appeasing weary travelers rather than wowing with drinks, food or flair. However, both in Seattle and other locales, we’ve seen a turnaround with hotel bars becoming better—standing on their own as great bars.

Which makes sense, because tracing back to the 18th century when the American cocktail tradition really kicked off, the hotel bar was the standard bearer and where many classic cocktails were created. At the new Fog Room (sitting on top of the also-new Charter Hotel in downtown Seattle), there’s a neat paragraph to open the bar menu that details the importance of hotel bars, and then a few suggested classic and new cocktails tracing back to particular hotels, including the Hanky Panky, a legendary drink with a delicious combo of gin, vermouth rouge and Fernet-Branca, created in 1925 at the America Bar in London’s Savoy Hotel. It’s fitting the Fog Room menu starts like this, as I believe its outstanding cocktails raise the hotel bar to perhaps its highest level yet in Seattle.

The drinks menu, outside of wine, was created by Jesse Cyr (as was the separate drinks menu for the Patagōn, the restaurant on the first floor). Cyr spent four years at the legendary Rob Roy, and has been a cocktail competition finalist nationally and worldwide, so he knows his cocktail—both making classics and inventing fresh sippers. For the latter, there are nine house cocktails he’s created here. Each had by my party-of-four on our last visit was appealing, starting with the Bank Statement. A graceful standout mingling vodka, blanc vermouth, lemon, lychee rose tea and sparkling rosé, it was, just as the description said, “light, refreshing, sophisticated,” but floral, too, and unfurling layers of flavor.

The Kingslayer (Cyr is a big Game of Thrones fan) will be a boon to adventuresome whiskey lovers, combining Eagle Rare 10 bourbon, blanc vermouth, anise-y pastis, herbal-and-bitter Cio Chiaro amaro and Peychaud’s bitters. On another path, for those searching out a softer drink that still boasts body, the Whisper in the Wind with Bols genever—gin’s sort-of sturdier cousin—Lillet rose, orange, apricot and an egg white, delights thanks to the smooth lushness of that egg white.

Really, all the drinks show off Cyr’s combination of classical learning and willingness to experiment with the full range of modern ingredients, while also demonstrating a deft balance and an approachable elegance. This matches the space, too, which has a sparkly, cool ambiance: glass pendant lights above the lovely wooden-topped bar, mirrors as you walk in, big-cities-in-fog black and white photos, and comfy seating ranging from low-slung deep chairs with pillows to tall bar tables to couches along the wall. Cyr said the inspiration comes from wanting a “cocktail den brought up into the air.”

And you are up in the air, above downtown, with long views through wide windows. Being up high with a cocktail as the sun goes down over the water is, well, amazing! But very bright—the bartenders even had to don sun glasses. An L-shaped patio travels around an outside corner, with date-worthy two-person tables on one side, and larger group seating on the other, including a communal table around a firepit. That, plus some inventive in-pillar heating, means outdoor seating should be available in all but the nastiest weather. A small side “Treehouse” room with a floor-to-ceiling dark wood “tree sculpture in the center, can be booked for smaller parties and events, as well as being what General Manager Silas Manlove (who has been a friendly fixture in the local restaurant and bar scene for a long while, and who keeps everything moving smoothly) called a “sexy third date area.”

While I could wax poetic about the cocktails and view for hours, don’t skip the food. There’s a bites menu with, as you’d expect, smaller shareables, a small plates menu, and some raw bar seafood and cheeses. The Fog Room is definitely a bar first and foremost, so expect a full restaurant set up. There are enough tempting choices that you may well end up leaving full. The fries dusted with zingy Japanese spice mixture togarashi and sesame accompanied by a velvety yuzu aioli provided a perfect partner for the cocktails—we liked them enough to order a second helping. The pork belly was a hit with my meat-eating pals, grilled and with charred rapini and a gochujang sauce, and if you’re veggie-ing up, you can’t go wrong with radishes and smoked butter.

When talking to Cyr, he said they’ve had a great crowd since opening just about two months ago, both hotel guests and locals taking the elevator up 16 floors. With the holidays barreling down, it’s a swell place to take visiting friends and relatives, though you shouldn’t wait around before coming yourself. If we have a rare winter sunny afternoon, those views aren’t to be missed, and if it’s raining, the cocktails will certainly make up for it.