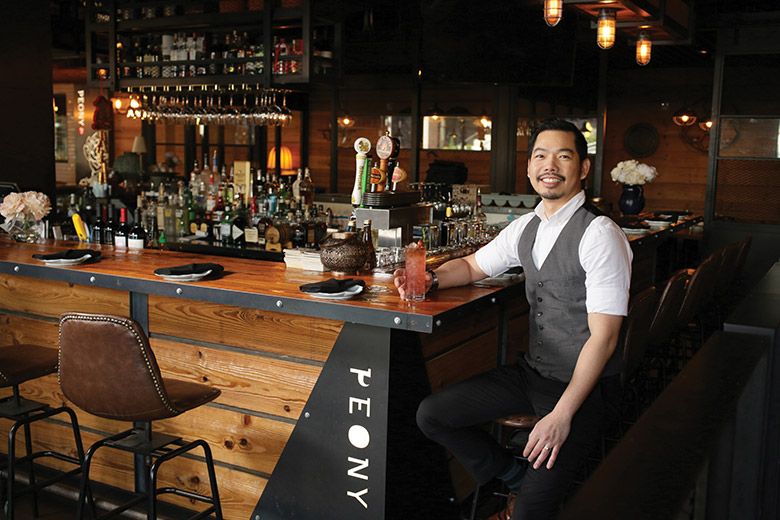 The History: While modern cocktails are made using ingredients from all over the world, the classical cocktail canon is perhaps overly influenced by European tastes. This can make it hard to find inspirational drinks when designing a house cocktail menu to match a spot with unique Chinese food, like Bellevue’s Peony. It takes investigating and experimenting, and—at Peony, at least—a team effort. The Song at Midnight was conceived after a visit to Hong Kong’s Mott 32 restaurant and bar by Peony owner Paul Choi and executive chef Danna Hwang. Mott 32 is renowned for craft cocktails inspired by an Asian palate, so Chong and Hwang used its flair and Asian flavors as a creative springboard, working with mixologist Matt Johnson of liquor distributor Young’s Market to pick out possible base spirits. Then, it was up to bar manager Joe Budharaksa (previously of Noi Thai Cuisine restaurant in Seattle and Honolulu) and lead bartender Fred Cruz to begin testing recipes using Asian and tropical ingredients. After many iterations, the Song at Midnight was born.

The Update: Like many cocktails at Peony, the drink is named after a classic Chinese movie, which marries well with the bar’s 1930s Shanghai vibe. The 1934 Song at Midnight is the first Chinese horror film, based on The Phantom of the Opera. The tall drink isn’t scary, though, unless you’re suffering from fructophobia (the fear of fruits): It features a trio of fruit—lime, passionfruit and pomegranate—with a base of lush Mount Gay Black Barrel Barbados rum and a float of Myers’s dark Jamaican rum. It’s also carrying enough island style with the fruit and rums to be a kissing cousin to many tiki concoctions.

The Twist: Though still fruit-based, sweet-and-sour Japanese plum wine steers the Song at Midnight off the normal tiki shipping lanes in an Eastern direction. The sour is amplified through a pickled plum garnish, whose super-salty tanginess isn’t for everyone (I loved it), but it is a taste you won’t soon forget.

The Final Taste: Fruit forward, with undercurrents of vanilla, cinnamon and pepper from the rich rum (Black Barrel is finished in charred bourbon barrels, giving it extra spice), and with herbal and bitter insinuations helped along by a smattering of Peychaud’s bitters, the Song at Midnight is refreshing enough for a bright, sunshiny happy hour and complex enough for closing time. The drink’s fruitiness and slightly sweet but not overbearing nature is mirrored in others on the Peony cocktail menu, designed to balance and pair with the deliciously bold and spicy Chinese food.

Song at Midnight
To hear the full song at home, you’ll need to track down plum wine, called umeshu (made from ume, or Japanese plums), and pick up some akaume zuke, which are Japanese pickled plums. Try local Asian grocery stores like Uwajimaya.

Directions: Fill a cocktail shaker half full with ice cubes. Add all of the ingredients except the Myers’s rum and garnishes. Shake well.
Pour into a Collins glass. Top with the Myers’s rum. Garnish with the rosemary and pickled plum.