The best brews from the Puget Sound region and beyond 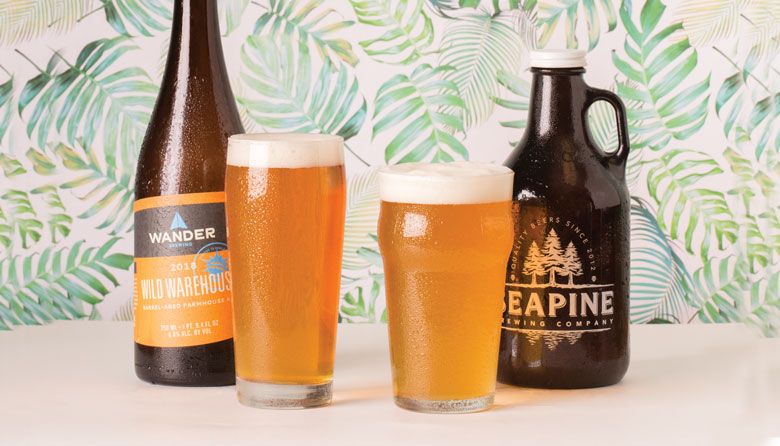 The Czechs invented this style of beer nearly two centuries ago, and Chainline’s version is true to its Bohemian roots: light golden in color, with crisp and refreshing flavor. The riff on Old World tradition comes from the use of a New World hop variety (Polaris hops), which contributes a mild, pleasant, minty bitterness. This beer is occasionally available at better beer bars around the area or look for cans at your local bottle shop, and you can always get it at the brewery’s all-ages, beer-only taproom in Kirkland (growlers and crowlers to go). Kirkland, 503 Sixth St. S; 425.242.0923; chainlinebrewing.com

Named to honor the hardworking people of the Leavenworth area (lumberjacks, farmers, trail builders and the like), where this beer is brewed, this reddish ale starts out a bit sweet but finishes clean and dry as it goes down easy. There’s not much bitterness to distract you from the slightly toasted malt character. Find it in 22-ounce bottles at Seattle-area bottle shops or visit the all-ages taproom in Leavenworth, where you can get growlers to go. Leavenworth, 935 Front St.; 509.548.2739; iciclebrewing.com This beer begins life as a regular saison (aka farmhouse ale), a traditional Belgian-style beer originally produced in farmhouses and served to farm workers, before spending about nine months in repurposed Chardonnay barrels from Woodinville’s Chatter Creek Winery, which is how this brew gains its unique character. Yellowish-orange in the glass, the ale presents myriad flavors, including green apple and pear, along with a faint lemony tartness. It’s something of a rare brew, released annually in about February in 750-milliliter bottles. It is easy to find for the first couple of months, a bit rarer thereafter. Look for it at local bottle shops or visit the brewery’s all-ages taproom in Bellingham. Bellingham, 807 Dean Ave.; 360.647.6152; wanderbrewing.com

This light-bodied, golden-orange ale, which offers gobs of fruity, aromatic hop character, showcases one highly polarizing hop variety: Mosaic. Some people adore this hop’s intense, dank, resinous citrus character, while others abhor those same qualities, but everyone should try it and decide for themselves. Always on tap at the brewery’s all-ages taproom, where you can get growlers to go, and occasionally in the rotation at better beer bars around the area. SoDo, 2959 Utah Ave. S; 206.682.7985; seapinebrewing.com

Instead of aging this beer in barrels, as brewers often do with their finest stouts, Skookum adds cubes of whiskey-laden oak to the conditioning tanks, giving you the same effect: caramel sweetness, alcohol heat and a hint of smokiness. Those flavors characterize a rich, slightly fruity, bitter, chocolatey beer that pours ink black and sports a light brown, thick head. If you’re lucky, you’ll find it in 12-ounce bottles at the local bottle shop or at the brewery’s 21 and over taproom in Arlington, but rarely do kegs of this beloved brew make it away from the brewery. Arlington, 17925 58th Ave. NE; 360.403.7094; skookumbrewery.com

Black as night, with a rich beige head, this Ballard-born brew, which has won many medals at many beer competitions, is rich with flavors of chocolate, coffee, a hint of vanilla and just a wee bit of smokiness. All of this comes from a recipe that includes, among other things, chocolate malted barley, roasted rye and roasted wheat. Always on tap at Stoup’s all-ages taproom, it might make an occasional appearance at your favorite pub. Ballard, 1108 NW 52nd St.; 206.457.5524; stoupbrewing.com Mango, peach, cantaloupe and pineapple are among the many descriptors that apply to the overall character of this beer. The color is a hazy, murky gold; the aroma is intense and overripe; and the fluffy fruit flavors disguise the alcohol so well that you’ll wonder if this beer could be accidentally served in a sippy cup or juice box. Among the Tumwater brewery’s ever-rotating lineup of IPAs, All Fluff is brewed periodically on no set schedule, but when it’s around, you can find it at the brewery’s all-ages taproom and at local bottle shops in 16-ounce cans. Tumwater, 8036 River Drive SE, No. 208; 360.584.9234; matchlessbrewing.com

Drinking this aptly named beer is like laying down on a pillowy bed of fresh tropical fruit and drifting off into dreamland. It’s sparkling gold in the glass, powerfully ripe on the nose and offers just enough bitterness to tame the sweetness. The unapologetic use of an absurd amount of hops provides a powerful burst of melon and tropical fruit flavors that will make your eyes bulge with delight. Find it on tap at the brewery’s all-ages taproom or get it in 12-ounce cans and 22-ounce bottles at any grocery store with a good beer selection. Fremont, 1050 N 34th St.; 206.420.2407; fremontbrewing.com Think of it as the bigger brother of the beer that won in our Pale Ale category. Much of its flavor comes from the same hop variety, Mosaic, but it features more malty backbone and hence more alcohol. Hazy, golden amber, with lots of resinous pine and melon-like flavors, the ale has a slight sweetness on the finish that makes it go down deceptively easy for a beer of its strength. This draft-only beer—dubbed an “imperial” IPA because it is higher in alcohol content than regular IPA—may occasionally make the rotation at your favorite pub, but you’ll always find it on tap at the brewery’s all-ages taproom. SoDo, 2959 Utah Ave. S; 206.682.7985; seapinebrewing.com There’s no shortage of local breweries offering barrel-aged beers these days, as beer lovers increasingly clamor for these hefty and potent brews. In recent years, our local brewers have upped their games, getting better and better at using repurposed booze and wine barrels to add character to their beers. Yet Seattle’s Fremont Brewing has proven itself a leader in this particular style, especially if you want to savor a beer that’s spent time in a bourbon barrel.

Perhaps the most popular of these rare delights is the B-bomb (the B stands for bourbon or barrel, you decide), a bourbon-barrel-aged winter beer released annually on B-Bomb Friday, the day after Thanksgiving. Local beer nerds also clamor for the Bourbon Barrel-Aged Dark Star Oatmeal Stout (B-BADS), which Fremont Brewing releases on or around October 1 each year.

When they’re available, during the fall and winter, get these beers on tap or in bottles at Fremont Brewing’s taproom, select local bars, or local bottle shops. As with most barrel-aged beers, supplies are limited, but if you follow Fremont Brewing on social media, it keeps you informed about both beers’ availability. In each of these beers, expect to encounter flavors such as chocolate, caramel and coffee, along with some sweet, boozy alcohol burn, but know that every year, both of them are unique creations.