The Best Oyster Palaces and Raw Bars in Seattle 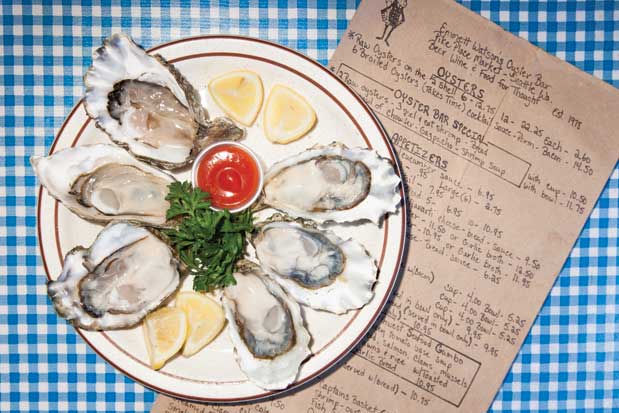 This article originally appeared in the January 2014 issue of Seattle Magazine.

Ballard Annex Oyster House
The nautically designed Ballard Annex (owned by the Matador folks, who also own Kickin’ Boot Whiskey Kitchen), boasts seafood of all stripes and from all over the country: lobster, Dungeness and Maryland blue crab, salmon, white fish and so on. But the list of oysters is where we concentrate our time: Usually six or more varieties are packed into ice behind the bar, and if you can manage to arrive during two happy hours (3:30–6 p.m., 10 p.m.–midnight), the bivalves are just $1.50 a pop. 5410 Ballard Ave. NW; 206.783.5410; ballardannex.com

The Walrus The Carpenter
At Renee Erickson’s famously popular oyster bar, the décor and vibe seem inspired by the sea: a splendid vintage chandelier that looks as if it is covered in coral, and cool zinc countertops that mirror the grays and whites of the shells. But obviously we’re not here to gaze at the room (well, not only): From nine to 12 oyster varieties vie for our attention, beautifully displayed in wire baskets on the bar, along with a particularly great list of white wines. Cooked seafood here is also worth investigating. 4743 Ballard Ave. (behind Staple Fancy Mercantile); 206.395.9227; thewalrusbar.com

Anchovies Olives
There’s no better or longer menu of raw bar offerings than those found here at Ethan Stowell’s Capitol Hill corner eatery. Scallops in citrus oil with marjoram, mackerel with smoked grapes, pickled fennel and pine nuts, and at least four varieties of local oysters anchor a lengthy list of seafood starters. But the entrées are fish heaven, too, with wild salmon, halibut, clams and octopus in starring roles, when in season. 1550 15th Ave.; 206.838.8080; ethanstowellrestaurants.com

Coastal Kitchen
Come in from the cold and park yourself on a barstool at the new oyster bar at this easygoing, family-friendly Capitol Hill favorite. Five oyster varieties are displayed on ice on any given day; they’re shucked, placed on ice and served with a choice of preserved lemon-cucumber relish (seasonal), fresh horseradish or house cocktail sauce. At happy hour (weekdays, 3–6 p.m., and again after 10 p.m. or 9 p.m. on Mondays), the chef’s choice oysters are just $1.25 each, which is about half price. 429 15th Ave. E; 206.322.1145; coastalkitchenseattle.com

Momiji
Warm lighting and a lively social scene keep the bar humming, but we find the raw bar selections even more appealing: hamachi tartare with black tobiko in a wasabi-soy-mustard, a delicious ahi poke salad and yellowtail with jalapeño in a citrus ponzu sauce are among the dozen raw preparations. Keep the raw party going with sushi; all the classics are here, along with an extensive list of rolls. 1522 12th Ave.; 206.457.4068; momijiseattle.com

Taylor Shellfish
It’s no surprise that the city’s coolest oyster bar just happens to be attached to the city’s coolest food destination, Melrose Market. Here, Taylor, the country’s biggest oyster-growing company, which is based in Shelton, offers oysters (and crab, mussels, clams, geoduck and more) to take home. But if you’re smart, you’ll opt to sit and slurp a dozen or so just-shucked beauties at one of the tables by the window; best oysters on Capitol Hill, crisp white wine at hand, and some fine people watching, too. 1521 Melrose Ave.; 206.501.4321; taylormelrose.com

Go straight to the source: Taylor Shellfish has been farming oysters in the cold waters of Puget Sound since the 1890s, both north and south of Seattle (in Bow, near Bellingham and in Shelton, respectively). And, lucky for us, both operations have retail outlets that are open for business year around. Stop for oysters (smoked, shucked or raw in the shell) plucked from the beaches right outside just hours before you purchase them at the retail store in Shelton (130 SE Lynch Road; open every day, except major holidays, from 10 a.m. to 6 p.m. 360.432.3300) and the Samish Farm Store in Bow (2182 Chuckanut Drive; open daily, 9 a.m.–5 p.m., October–March, and 9 a.m.–6 p.m. April–September; 360.766.6002; taylorshellfish.com

Blueacre Seafood
At this swish seafood house, the booths are deep and comfy, and the oysters are plump and sensational. Six to 10 local and/or British Columbia–grown varieties are on offer on any given night, displayed on crushed ice at one end of the bar (lucky diners may score one of the eight barstools right in front), but that’s just getting you started. Here you’ll find crisped razor clams with hot mustard, Penn Cove mussels in green curry, black cod, Maine lobster and even house-pickled herring on a menu that’s packed to bursting with seafood. 1700 Seventh Ave.; 206.659.0737; blueacreseafood.com

The Brooklyn
Belly up to the copper-topped bar for a plate of oysters on the half shell (choose from nine varieties, although the selection changes seasonally) and a perfect martini in this clubby, classic Seattle spot. Here, the service is expert, and there’s a warm conviviality to the place. If you decide to stay for dinner, wild salmon (seasonal), bouillabaisse with prawns, scallops, clams and octopus, and crab cakes fill out the menu (along with a slew of prime steaks). 1212 Second Ave.; 206.224.7000; thebrooklyn.com

Dahlia Lounge
Tom Douglas’ flagship restaurant’s “sea bar” menu offers an ever-changing array of raw seafood tastes, served in small portions. Depending on the season, try the geoduck with mint and pear, or the kona kampachi with shiso, shoyu and pickled ginger. Oysters, too, are available: One seasonally available variety is served with coriander seed mignonette on the side. And the full dinner menu offers an even more extensive exploration of local seafood. 2001 Fourth Ave.; 206.682.4142; tomdouglas.com

Shuckers
Tucked beneath the Fairmont Olympic Hotel, the swank, old-school Shuckers is wrapped in polished mahogany paneling. Here, a staff of professional waiters caters to the business crowd, pouring ice-cold martinis and platters of local oysters by the dozen (there are approximately eight varieties on offer on any given day). Those who prefer their oysters cooked have it particularly good here, however: Opt for oysters baked in a Parmesan crust, smoked, fried, à la Rockefeller (spinach, hollandaise and Pernod) and as many as five other preparations. 411 University St.; 206.621.1984; fairmont.com

Monsoon East
The sleek Bellevue outpost of Monsoon has oysters on the half shell and a seasonal raw bar dish—such as seared albacore with pineapple, herbs and avocado—offered every evening. Visit during happy hour (3 p.m.–closing, Sun.–Thu., 3–6 p.m. on weekdays) when oysters are just $1.50 each. 10245 Main St.; 425.635.1112; monsoonrestaurants.com

Emmett Watson’s Oyster Bar
At Seattle’s oldest almost exclusively oyster bar, the first of its kind when newspaperman Emmett Watson opened the place in 1979, the menus are written on paper bags, and the oysters are either raw on the half shell or broiled with Parmesan, bacon and “sauce” (read: butter). Both versions are great, and if you’re not the type to make a fuss about your oysters (or about the décor, which is showing its age), and if you don’t want to pay a premium or wait in line, then this is your place. Plus: fish and chips, cod, clams and chowder. 1916 Pike Place, Suite 16; 206.448.7721; Facebook, Emmett Watsons Oyster Bar