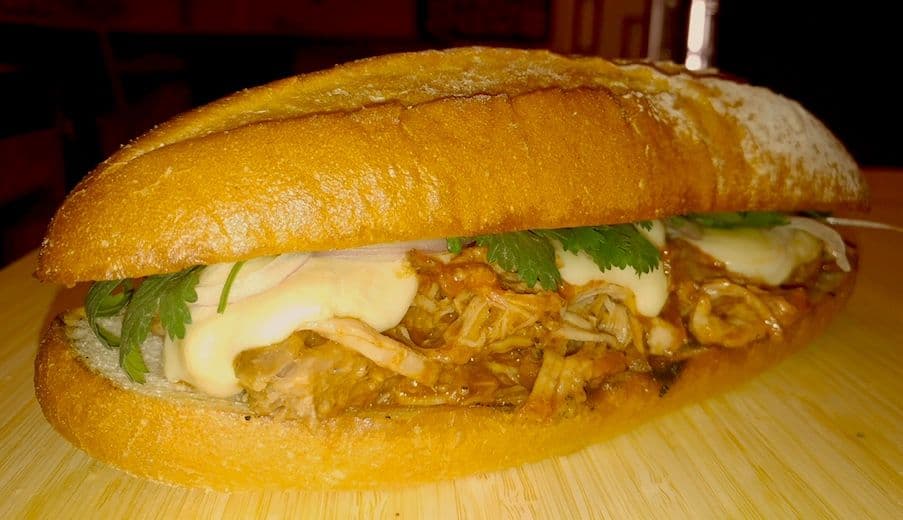 The family behind the business starts with Case Justham, formerly the sous chef and head butcher at The Swinery, who will be the chef here. His mom, Linda, is to thank for much of the casual, colorful décor—Justham says he picked the brass-knuckles-and-knives graffiti art and hired a former dishwasher to do it—and sister Piper Carscadden handles the books. The focus is sandwiches, an area Justham clearly has experience with after his years at The Swinery.

Though the chef is quick to point out that he’s not reinventing the wheel here, his menu is just creative enough to be interesting. There’s a take on a Philly cheesesteak, his version of a Cuban, a fried chicken sandwich that sounds amazing. They all have fairly obscure, cheeky names—for example, the Ed LaDou, with barbecue pulled pork, provolone cheese sauce and cilantro, is named after the man credited with inventing the barbecue chicken pizza—and come on an Alki Bakery demi-baguette. Those hefty hot sandwiches are $9; cold grab-and-go options like peanut butter and bacon or pimento cheese will be $3 to $7.

And vegans, take note: Justham has two special sandwiches just for you. We’re particularly excited to check out the Anton LaVey with housemade (breaded and fried) seitan named after—are you ready for this?—the guy who founded the Church of Satan. (There aren’t enough seitan/Satan jokes.)

In terms of clever titles, the sandwich shop’s name evolved from knuckle sandwich—“My cooking style is a lot of things, but it’s not subtle,” Justham says. “It hits you in the mouth.” He finally settled on Brass Knuckle as a nod, too, to White Center’s tough-guy attitude. (Plus, he adds, if things go well, it can easily be spun off into Brass Knuckle Bar, Brass Knuckle Burger, you get the idea.)

White Center may be the only place the family could afford rent, but Justham’s really happy to be a part of the ‘hood. For more happenings along 16th Avenue SW, check out our roundup from December’s print edition; for more sandwiches, get over to 9602 16th Ave. SW daily 11 a.m. to 8 p.m.