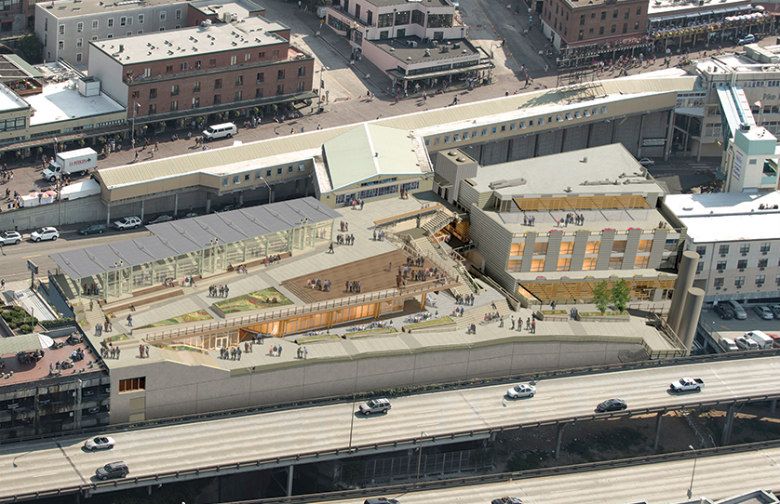 It’s been a project more than 40 years in the making: the expansion of Pike Place Market by rebuilding the portion that was demolished following a fire in 1974. The site is located just across from the Market on Western Avenue, where Bavarian Meats got its start. Most of us have known this space only as the parking lot built after the fire.

Nearly insurmountable restrictions, both political and physical, have made expanding this historic place a complicated undertaking. But on June 29, the new MarketFront will make its public debut when the ambitious expansion, designed by the Miller Hull Partnership, is unveiled. It will once again provide a marketplace for farmers and producers of artisan goods, as well as a public outdoor area with unparalleled views of Elliott Bay. Yes, there will still be parking.

– 30,000 square feet of public space, including a breathtaking plaza with covered and open-air possibilities plus a view deck overlooking Elliott Bay

– 12,000 square feet of commercial and retail space for artisan purveyors

Eat and Drink
The new MarketFront Producers Hall will feature four owner-operated food and beverage vendors selected for their unique ability to create their product on site. Learn more about these businesses:

Old Stove Brewing Co.
Co-owners Chris Moore and Brian Stan have been operating out of a temporary Market location since spring of 2016, awaiting the completion of their stunning new home, with its 80-foot window overlooking the Olympic Mountains. The brewpub will anchor MarketFront, and the brewing duo plan to serve a rotating selection of 20 house-made beers (you’ll see their grain silos outside) on tap, plus a pub menu. oldstove.com

Little Fish
If you’ve already fallen in love with the Market’s intimate JarrBar restaurant, know that owner Bryan Jarr (formerly of the much-missed Madison Park Conservatory) has big things in store at this additional restaurant and cannery. Chef Zoi Antonitsas (a Food and Wine Best New Chef and Top Chef alum well known for her cooking at Westward and, most recently, Omega Ouzeri) cooked for Jarr at Conservatory and will preside over the kitchen here, where seafood is the focus—specifically, seafood canned, cured, salted and smoked on the premises. Though the projected open date was summer, they’re now looking at November 1. jarrandco.com

Honest Biscuits
Southerners have long appreciated a good biscuit, and thankfully, Seattleites have caught on. Owner and head baker Art Stone learned the art of making biscuits in his grandma’s North Carolina kitchen; now you can sample his wares any time of day. Don’t miss The MacGregor, with bacon from Bavarian Meats and Beecher’s Flagship cheese. honestbiscuits.com

Indi Chocolate
This sweet enclave will be the only part of the open-air market enclosed behind glass, to allow owner Erin Andrews to control the temperature while creating her beautiful chocolates. Andrews makes small-batch, single-origin dark chocolate; she’ll have desserts and house-made chocolate chai to enjoy there, but it doesn’t get much better than her classic chocolate bars. indichocolate.com

June 29, 2–7 p.m.
Pike Place MarketFront, 1901 Western Ave.
Celebrate the grand opening of MarketFront with bites from Producers Hall vendors; performances by Market buskers and local bands The Pazific, The Dip and Grace Love; and activities designed to help guests explore the Pike Place Market expansion’s new features. Mayor Ed Murray will be on hand to welcome the crowd at 2 p.m. Donors who participated in the Pike Up! campaign will have their first opportunity to see their engraved charms or bronze hoofprints, with volunteers on hand to help them locate those items.