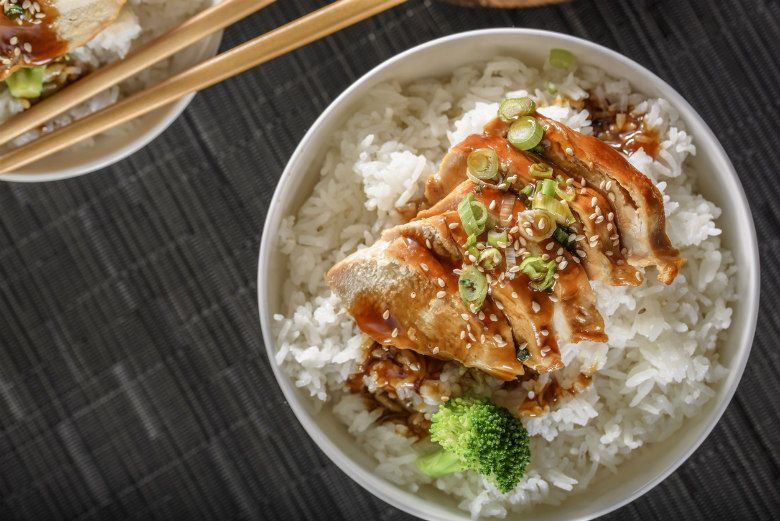 I recently got a call from some East Coast TV producers who wanted to know the state of teriyaki in Seattle.

Even most locals don’t know that chicken teriyaki first gained popularity here. It is our invisible fast food contribution. Since the mid-1970s, they’ve popped up everywhere.

Toshi’s Teriyaki, a chain now reduced to one location in Mill Creek, was the first, opening on south Queen Anne. After that, they proliferated. That sweet sticky sauce was a hit.

Many food writers have written about the phenomenon in the last decade or so. The New York Times declared, “In Seattle, teriyaki is omnipresent, the closest this city comes to a Chicago dog.”

I’ve noticed that teriyaki joints have expanded their offerings greatly these days. It used to be you got a lump of white rice, an indifferent salad and grilled chicken marinated in sweet, sugary soy sauce and other spices. Now you can get a full Asian meal, from bibimbap to hum bow.

I was asked what my favorite teriyaki joint was and I realized that most of us don’t go around town searching for the best teriyaki—we grab what’s closest. It’s fast food, convenient, something you can tell yourself is somewhat healthier than a burger or BBQ ribs, not that it really is.

A good teriyaki place is the one on the way home. Maybe it’s in a neighborhood strip mall, with a couple of parking spots out front so you can get in and out fast.

There are some things to avoid or prefer, though. Stir fried teriyaki isn’t as good as grilled. Some places have good salad dressing. One place on the Eastside I hear about puts its lettuce leaves in a plastic bag, like a biohazard. Not appetizing. Still, I’ve never heard of someone going to a teriyaki place for the salads.

As a single dad, I used to feed my kids from Toshi’s in Kirkland, and before that I frequented Yak’s Teriyaki (formerly Yak’s Deli) in Fremont, which seems to be hanging in there despite gentrification. A spot I’ve been to recently is Rainier Teriyaki, across from where the old Rainer Valley Chubby and Tubby used to be. Try their smoky pork teriyaki.

Teriyaki joints are still around, but I sense change coming. Food trucks and taco buses are a new form of competition. Plus, lots of little strip malls and cheap-rent locations are being razed for redevelopment. They’ve got competition from other foods too. Next to Yak’s, for example, there’s a pho shop that sells banh mi sandwiches, vermicelli bowls and kogi tacos.

Another threat is home delivery. As Amazon and other services expand, who needs a parking spot? You can have dinner brought to your door. The brave new world of expanded choice and ordering by app might hold challenges for that teriyaki joint down the street.

Or maybe, now so entrenched, they will endure despite fads and fashions.