Folks used to laugh about pre-made booze in a can, but these will change your mind (and your drinking game) 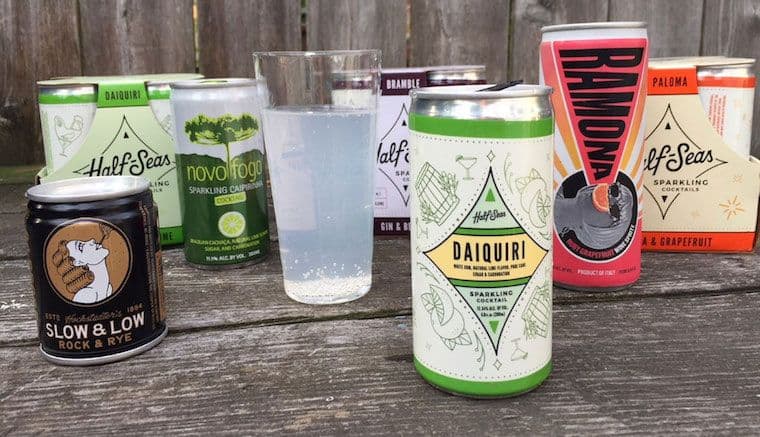 There was a time when premade mixed drinks bought in cans or bottles were the jokes of the drinking world. With good reason, as they tended to taste of chemical flavorings at best. But in our modern booze evolution, we’ve recently seen a number of canned cocktails that are being premade with care. Especially in summer, these canned cocktails are ideal for picnics, days at the beach (beaches that allow cocktails, of course) and lazy days in the yard, due to their convenience. Below are four canned cocktails to get you started:

Half-Seas
Okay, this is a bit like a bonus, as there are actually three different Half-Seas effervescent cocktails you should try: The Bramble, an old English favorite with gin, berries and citrus; the tequila-and-grapefruit-based Paloma; and the classic rum-and-lime Daiquiri. Each can equals one drink, so planning for parties is a snap. Made using all natural ingredients and premium spirits by Seattleite Miles “Scrappy” Thomas (the ex-Seattle bartender and genius behind the amazing line of Scrappy’s bitters), Half-Seas cocktails can be had straight from the can if they’ve been chilled, or over ice. I like a little fresh fruit with them, but they’re dandy without, too. The only hard part with Half-Seas is deciding your favorite—I’m currently on the Daiquiri, thanks to its slight tang and position as a legendary summer staple, but have gone through periods where the others were tops in my rotation.

Ramona
Wine spritzes or wine coolers historically here in the US haven’t always been held in good standing by discerning drinkers, even when they went through a period of popularity (especially with young drinkers) in the ‘80s. But in other countries, a slightly sparkling mix of good wine and fruit flavors has long been a beloved tipple. The Ramona is helping to change their reputation here. It’s a wine spritz/wine cooler in a can, but one that’s delicious. Created by a well-known sommelier as a lighter, and light-hearted, alterative to wine, Ramona is made using organic natural ingredients, including Sicilian grapefruit juice and grapes also from Sicily. Sip it straight from the well-chilled can with a straw for even more fun.

Novo Fogo Sparkling Caipirinha
The regular Caipirinha is the National Drink of Brazil—where they know intimately about hot-weather drinking. This canned version adds carbonation, but outside of that keeps to the tried and true, with sugarcane-juice spirit Cachaça, natural lime juice and sugar. It’s a delightful mix, and it makes sense that it comes from Brazilian distillery Novo Fogo (using their Silver Cachaça), as they’re known for making charming cachaças. But the actual canning takes place right here in Seattle, so it’s local to both here and Brazil. I like it best well-chilled right out of the can, or over ice if really hot, and it’s a first-rate pairing for hotter days spent in the sunshine. I like a little extra slice of lime, too.

Hochstadter’s Slow & Low
This drink, a Rock & Rye, goes back to the early 1900s, with rye and rock candy served in glasses, as well as the moniker being used for sweetened pre-bottled drinks, both alcoholic and non-boozy (there’s even a Rock & Rye soda). In this modern take, Slow & Low uses aged rye whiskey, raw honey, navel oranges, rock candy and aromatic-style bitters. While only delivered in palm-sized 100 ml cans, these still pack a swell whiskey boom at 84 proof, and have a flavor that leans in an Old Fashioned style. It’s a canned cocktail for whiskey drinkers looking for a simple sipper to have while sitting on the back porch as the sun slips down over the horizon.

To find these tasty beverages, head to Total Wine & More, DeLaurenti near Pike Place Market and even your local Target.