Joule’s Rachel Yang makes the most of this versatile, seasonal Asian fruit 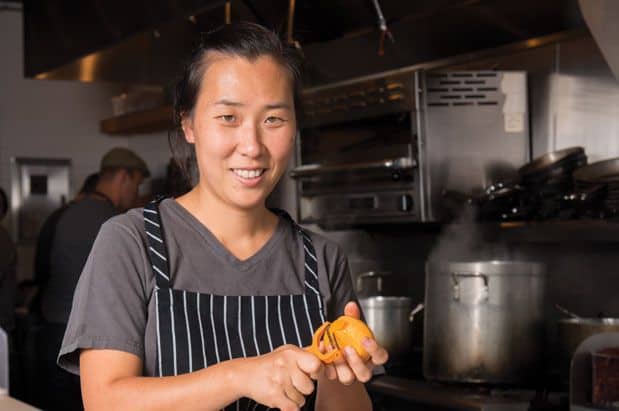 While Rachel Yang was growing up in Korea, her family ended meals with sujeonggwa, a dried persimmon tea. “I can still remember the sweet and spicy aroma that would fill up the kitchen whenever my grandma would make the tea,” says the co-owner/chef of a Joule and Revel, who celebrates the fall and winter appearance of fresh persimmons in markets by featuring them in various dishes. “It was served cold with a garnish of a few pine nuts (for flavor, as well as to keep you from gulping it). There aren’t many traditional sweets in Korea, so this sweet and spicy tea was a real treat!”

Persimmons are beautiful yet baffling to many home cooks. The bright orange fall fruit resembles a tomato, although that’s where the similarity ends. Mature persimmons can be candy sweet, depending on the variety. emLeft: Joule’s persimmon salad with sesame, sumac and basil gremolata. The heart-shaped Hachiya variety is best when it’s soft, while the flat-topped Fuyu is better when it’s firm. Originally native to Asia, this versatile tree fruit is grown all over the world in warmer climes and plays an important supporting role in many dishes. Yang showcases the juicy gems at Joule’s brunch in a salad seasoned with sesame, sumac and basil gremolata.

Where she buys them: Persimmons are available from fall until midwinter at most Asian markets. They typically sell for around $1 to $2 a pound. Yang looks for fruit that’s bright orange and soft to touch.

How she uses them: The flesh of softened Hachiya persimmons can be blended into vinaigrettes or ice cream, or used as a foundation for chilled soup, while the Fuyu shines when sliced into salads or made into pickles. Both varieties can also be baked into cakes and cookies. They’re the star of a steamed pudding that’s a stalwart on many Midwest holiday menus.

Where you can find them: Most supermarket produce departments carry persimmons. Yang recommends Uwajimaya Asian market (locations in Chinatown–International District, Bellevue and Renton). If the Hachiya variety feels firm, ripen the fruit at home in a brown paper bag with an apple.