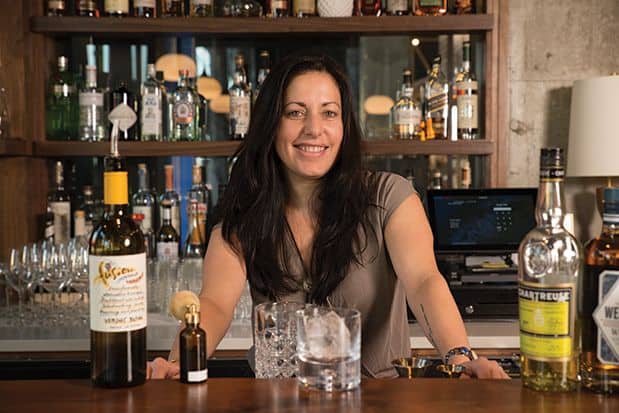 The Cocktail: Off Kilter
The Bar: Vestal
The Bartender: Ariana Vitale

Drink History Dating back to at least 1916, the Chrysanthemum cocktail, on which the Off Kilter is based, is an unsung classic in which dry vermouth takes a rare starring role, with Bénédictine liqueur as the sidekick, plus a little absinthe to round things out. It was a key inspiration for effervescent Vestal bar manager Ariana Vitale when she was developing the Off Kilter, but she decided to use verjus blanc (which is nonalcoholic) instead of vermouth. The juice of unripe grapes, verjus has a graceful tartness and acidity. Used for cooking in wine-producing regions around the globe for years, it’s now showing up locally on food and drink menus, and provides a creative base for drinks that are lighter on alcohol, like this one. To deliver the Bénédictine herbal notes of the original, Vitale adds yellow Chartreuse (a touch sweeter and softer than the better-known green variety), while keeping the gentle hints of absinthe.

The Twist When building on the Chrysanthemum, Vitale, who was a brand ambassador for Novo Fogo’s cachaça, a Brazilian sugar-cane-based liquor, really wanted to “play around with adding a smoky element.” To achieve that, she added small amounts of two personality-rich whiskeys: SoDo-based Westland Distillery’s peated single malt American whiskey and Kilchoman single malt Scotch whisky, from one of Scotland’s smallest distilleries. These two supply layers of peat and smoke, and mingle with the other herbal tones without getting too heavy. As Vitale says, it “drinks like a stirred, boozy cocktail, but won’t put you on the floor.” The smokiness helps make the Off Kilter an ideal match for the restaurant’s deep forest ambiance (which is remarkable, given that Vestal is on the ground floor of a big Amazon office building), created by the massive open wood-fired hearth, terrariums and plants, candles and twinkle lights shining like stars in the ceiling. The hearth is Vestal’s center and really serves as the home-base restaurant for Josh Henderson (executive chef and founder of the Huxley Wallace Collective). The care taken in making the dishes on Vestal’s creative Northwest, seasonal menu, with items such as super-slow-roasted steelhead with steelhead skin “chicharrones,” matches the meticulous hand-crafting of the drinks at this small but cozy bar.

The Tools Most ingredients can be found at any good local liquor store, though you may have to look online for the verjus blanc (try ChefShop.com). If you want a giant ice cube, consider buying the Tovolo King ice cube tray on Amazon. 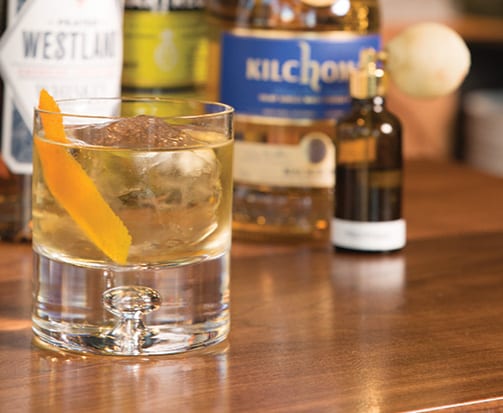 Image by Maria Billorou
The Off Kilter’s smoky, floral aromas shine in an old fashioned–style glass

» Add the absinthe to an old fashioned–style glass or one that’s comparable. Swirl it around so that every inch of the inside of the glass is touched. Discard any remaining absinthe.

» Add one really big ice cube or a number of smaller ice cubes to the glass. Strain the mix into the glass. Squeeze the orange peel over the top of the drink and then drop it in.

A note: Vitale uses a perfume dispenser to spray the glass with absinthe, instead of rinsing the glass with it; it helps to conserve product and it looks cool. If you have an extra dispenser, try this method.