All right, now poke is officially everywhere in Seattle. 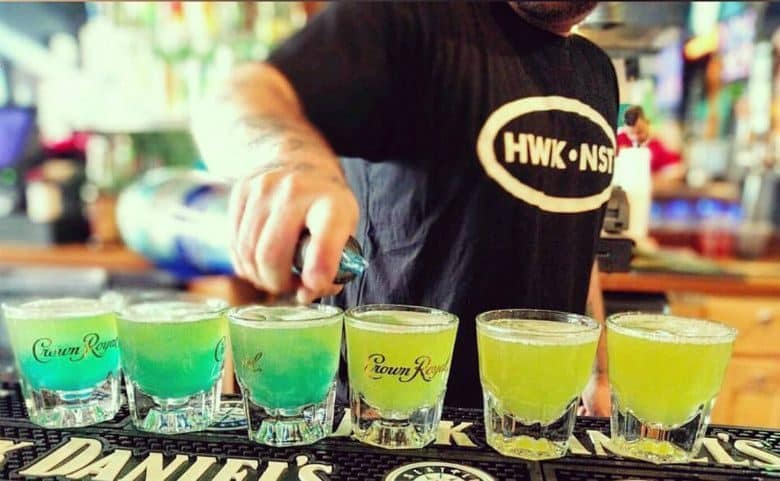 There are only three proteins sports fans need concern themselves with: burger, wing and the flesh of a 49ers quarterback.

It’s no surprise, considering Hawks Nest co-founder Rachel Kessel—who quit her job and mortgaged her house to open her first Seahawks-themed bar with co-owner Joe Piano—is the hardest of hard-core twelfies. The Montana native adopted the team as her own when she moved to Seattle during the dreadful-to-middling Tom Flores and Dennis Erickson years, according to a 2009 profile in the Seattle Times. That’s commitment.

As sustenance for sports watching, the new Nest peddles all the requisite pub grub: wings, nachos (make that “Hawkchos”) and a burger smorgasbord ranging from traditional to peanut burger bacon. Brunch is reportedly in the works, perfect for those early afternoon kickoffs.

But as the Stranger points out, a less expected dish crashes the bar-food party. Poke, the Seattle food trend that somehow won’t slow down, turns up as one of the Nest’s “house specials” alongside a jerk chicken bowl and watermelon shrimp skewers. In a town where new poke places seem to open by the hour, maybe we shouldn’t be shocked that even our true-blue sports bars are hopping aboard the fish bowl train.

Like truffle-salted tater tots, is it a sign of the impending Seattle apocalypse that no-frills sports bars are chasing foodie trends di jour? Dunno. That’s for Squatch and the bald guy who eats bugs on television to decide.

At any rate, there are worse ways to cap a day at Alki Beach than scarfing tuna and portmanteau nachos while watching James Paxton strike out the side.