With intricate Japanese whiskey cocktails and creative sushi dishes, it's no surprise this place is already packing people in 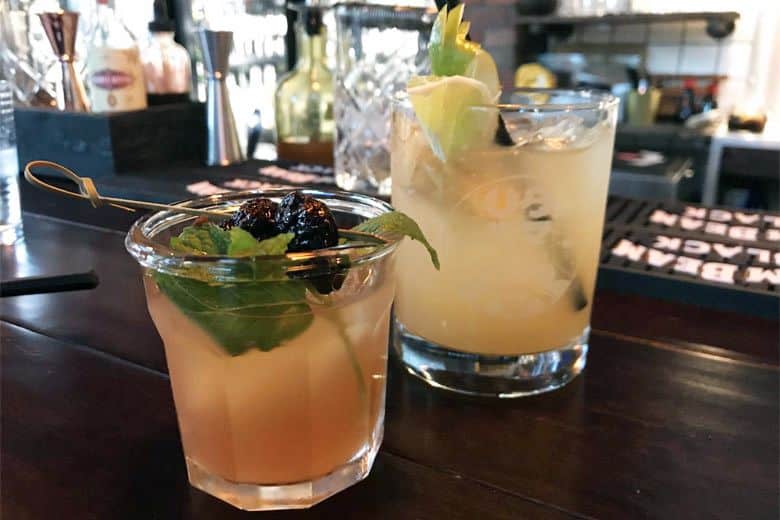 Just a bit west on bustling Pine Street from sibling restaurant Suika, Tamari Bar (500 East Pine) opened on Valentine’s Day styling itself as a “new-style Izakaya.” An Izakaya is a neighborhood Japanese pub of sorts, a spot for more relaxed, often after-work, drinking and eating. And Tamari Bar definitely has an informal, friendly vibe, thanks in large part to the welcoming staff under general manager Kan Terao. The new Capitol Hill bar also has some intriguing touches on the menus that make it stand out.

The fun starts, as with most worthy meals, with a good drink. There are six options on the cocktail list, with Japanese-hued takes on classics along with a few signature house drinks. I started with the Yuzu Fashioned and its big dollop of bourbon, mixed with Angostura bitters and Yuzu syrup (an Asian citrus fruit, Yuzu in various forms has become a cocktail standby in Seattle as of late, thanks to its lovely tartness). Garnished with rum-marinated cherries and fresh mint, this take on the canonical Old Fashioned had a smooth and graceful manner, with layers of floral and fruit.

If dropping in for some quick sipping on the commute home, the crispy root veggie chips (lotus root, taro, and others) with Japanese honey mustard and sriracha dipping sauces makes for swell snacking. For those looking for more filling fare, an intriguing full food menu is available, covering a large swatch of Japanese edibles, from a sushi selection of three rolls (including a veggie option) and an sashimi selection of three samplers, to shime, or rice and noodle, selections, and niku, or meat, with the latter including a Wagyu beef marinated in Japanese barbecue sauce and stone grilled, sure to entice carnivores.

However, the tsumami and yasai section of small plates leads to my favorite dishes, and perhaps the most creative experiments from chef Nobu Watanabe. First (this instantly became my wife’s top new nibble) was My Nira-Tama, a seemingly simplistic dish of cold Chinese chives, onsen Tamago (soft-boiled egg), and Seattle Ra-Yu, a seasoned house chili oil. If feeling really adventuresome, don’t miss the Shiro Shooter, a cauliflower “pureeshaved” with white chocolate. Like chilled cauliflower pudding topped with a thin layer of tiny white chocolate pebbles, it was both insane and amazing.

Tamari Bar isn’t huge, and falls into the almost-industrial vibe – open duct work and pipes hanging from a high ceiling, brick walls, clean lines, large street-side windows. Enough individual touches provide personality, like a clock made from chopsticks, a stretch of brick where Japanese TV and movies are projected on to, and scattered shelves in various spots with Sriracha bottles, Cup O’Noodle soups, Japanese whiskey, glass jars of food and spices, and other curiosities. I believe sitting at the bar to get a better view is always the right choice. However, if stopping by with under-21-ers, there’s a small separating wall between bar and a few cozy non-bar dining spots, so all ages are welcome. I’d get there early, as Tamari Bar is already packing people in – with good reason, as it’s an awfully fun, and tasty, spot.