Hotel bars have had an up-and-down history. At one point, they were often glamourous spots utilized by cocktail-and-scene lovers as well as guests—think the legendary bar at the Waldorf-Astoria during the early parts of the last century. Then, for years, many became drab affairs haunted by tired-eyed traveling salespersons.

Lately, though, we’ve seen a surge in better hotel bars and restaurants. The newly-opened Rider, in downtown Seattle’s Hotel Theodore (which was previously the Hotel Roosevelt), is a good local example of this. It’s a worthy bar that happens to be in a hotel, and it’s already luring crowds of travelers and locals alike.

The cocktails are the initial draw, with a fun and creative list put together by bar manager Ariana Vitale, who last managed the much-missed Vestal. The cocktails are not only cleverly named, with subtle shout-outs to our fair city. But they’re well-designed and imaginative, while still being approachable. Take Turn Out the Lights. Inspired by the much-maligned (in snootier cocktail circles, at least) Long Island Iced Tea, it combines rye, dry London gin, delicious lightly-herbal French aperitif Cocchi Americano, Cointreau, lemon juice, simple syrup and actual black tea into a flavorful delight. The fresh mint it’s garnished with comes dusted with edible gold sugar that sparkles like unburied treasure.

Little touches like that—as well as the yummy house-made orange sherbet garnishing the refreshing, Dark and Stormy-inspired Storm of the Century—show deft artistry and care. While there are also beer and wine choices (and a good spirits list), don’t miss Barrel 26, a house 2-year-old bourbon made in collaboration with SoDo’s 2bar Spirits using all Northwest ingredients. You can have it poured straight off the barrel, or get it in a classic Manhattan, old fashioned, or a Boilermaker. 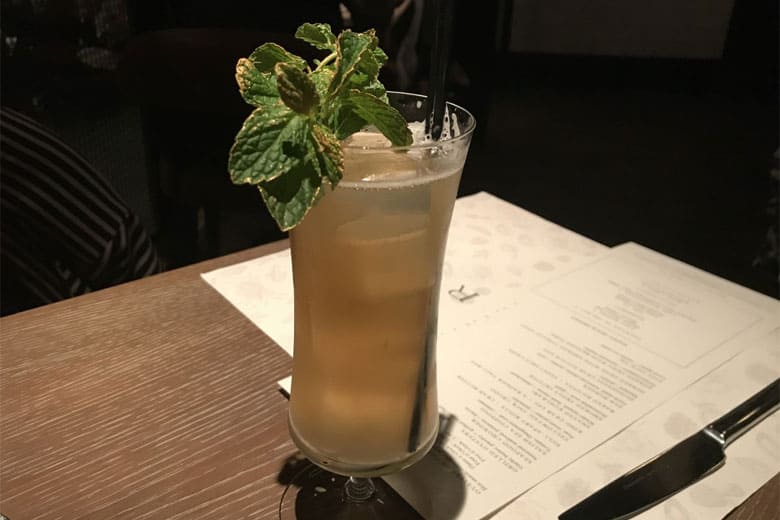 Trot into Rider to escape the downtown crowds with a tasty cocktail, like Turn Out the Lights, with gold dusted mint. Photo by Natalie Fuller.

The barrel adds a little old western ambiance, echoed by the kitchen’s massive wood-fired grill. (Funny enough, Vestal also had a thing for wood-fire cooking.) The food delivered from executive chef David Nichols leans local and walks the same creative-but-approachable line that the cocktails do. If you’re just having an after-work (or post-shopping) drink and a snack, don’t miss the shaved kohlrabi noodles with cheese and chimichurri, which brings that underused vegetable into a deserved zingy spotlight.

Between the kitchen’s open fire and the design touches—a fair amount of leather, wooden floors in the bar area—across its main level and an upstairs 21-plus bar (90 seats on each), Rider has a slight fancy-campsite air. The columns with white subway tiling aren’t exactly woodsy. But when escaping the hurly-burly of downtown, escape into the fantasy.

Rider certainly isn’t a typical, ho-hum hotel bar and restaurant taking its built-in audience for granted. From a fresh rosemary sprig placed with each napkin, to the sprinkle of brewer’s yeast on the perfectly soft rolls served with crab butter, it’s worth visiting whether you’re staying at the hotel or heading home after happy hour.