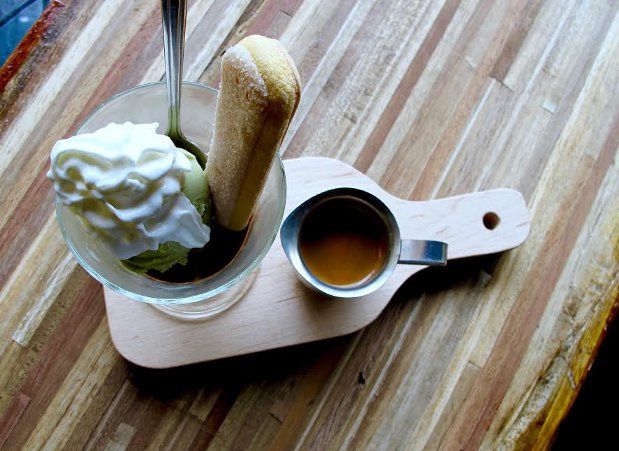 To lump gelato in with ice cream, frozen custard and—worse still—frozen yogurt, is to downplay the unique deliciousness and concentrated flavors of this cold, creamy dessert. It’s severely underrepresented here, but worthy of the sort of reverence it holds on the streets of Italy.

What’s so special? Well, to start with, gelato has one-third the calories of ice cream—or, as I like to think of it, you’re justified in eating three times as much. There’s no sorcery here or artificial ingredients: Gelato is traditionally made with whole milk while ice cream is made with heavy cream. The air whipped into ice cream during the churning process (plus the higher fat content) dilutes the flavor some, so gelato generally offers a more pronounced flavor. And you’ll notice gelato is served a few degrees warmer for premium consistency.

In April, Nutty Squirrel Gelato plans to open its third shop—a Magnolia flagship to join other locations on Phinney Ridge and in Maple Valley. It’s an ambitious remodel of a former kids’ consignment shop right in the heart of the neighborhood, where passersby will be able to peek in the street-side windows and see small batches being slow churned. What owners Alev and Tolga Seymen lack in culinary background, they’ve made up for in a palpable passion for not only gelato, but also the happiness it brings to their customers. Parents themselves, the couple plans to have a kids’ play space here. Tolga wants to lead gelato demonstrations to young classes as well.

Each day, a dozen flavors are available, though Tolga’s catalog of recipes, at this point, is somewhere around 300. You’ll always find the traditionalists’ favorites—try the spectacular pistachio made from imported nuts—with some uniquely Northwest additions and influences from their European heritage. A flavor they’ve nicknamed Magic Carpet Ride (black sesame gelato with dark chocolate swirls and a pomegranate reduction) just won them an impressive finalist’s position in the Gelato World Tour. Tolga talks about the terroir of the nuts he uses. He uses a refractometer to calculate the sweetness of strawberries. This is serious business.

“Artisanship is key in the gelato business, like in any industry,” Alev says. “I think the Northwest is wonderful for having fresh berries… Then there are the basics of gelato: those nutty flavors that are very Italian. When you have the basics right, and you have [access to] wonderful ingredients, it’s so easy to combine things.”

This same sensibility and curiosity when it comes to ingredients is at play in Ballard, where Rebecca and Jordan Barrows took over D’Ambrosio Gelato quietly last year. Now that they’ve got a summer season under the belt, they’re remodeling the shop—though know they’re open during the process—to better match the look and feel of the surrounding neighborhood. Bench seats in the windows have replaced counter-height stools unsafe for kiddos. Floors were redone. An affogato bar is forthcoming, and will feature tea and cold brew in addition to espresso. “We can’t improve the product,” says Rebecca, of the gelato Jordan learned to make from original owner Marco D’Ambrosio and his father Enzo when they bought the business. “Some of these recipes are decades old. But we can improve aesthetic, and we can improve hospitality and customer service.”

Longtime fans can still find the spectacular nicciola (hazelnut), caramel and fig, and vibrant dairy-free sorbettos, of course. But Jordan is an experienced chef who last built out the kitchen and menu at Aslan Brewing Company in Bellingham. You’ll see the brewery’s influence in the surprisingly beer-forward chocolate stout flavor; you’ll see Jordan’s trained palate in the delicate balance of flavors like grapefruit Campari sorbetto, cinnamon horchata, caramelized fennel that they make for neighboring restaurant San Fermo, and more.

“One of our challenges is keeping the traditional dessert flavors that people have been enjoying here for years, and balancing the chef-driven flavors that Jordan really loves,” Rebecca says.

Both shops have big changes afoot. But the good news is that you can head over right now—eternal winter be damned—to enjoy a scoop.