We’ll tell you where 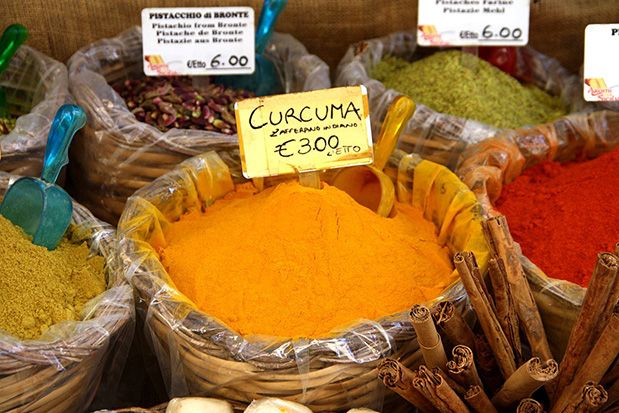 Raise your hands: Who’s still following their New Year’s resolutions? We spend so much time with our faces buried in cheeseburgers here, we’re all for making eating healthy a little easier (as long as there’s still cheeseburgers, too). One way to do that: eat more turmeric, that beautifully orange spice you may recognize from the flavor of curry, that’s now been embraced by the clean-eating community for its reported anti-inflammatory and antioxidant properties.

The hot trend right now is golden milk—a latte of sorts (it tastes better if you call it a latte) made from turmeric root steeped in non-dairy milk like coconut or hemp. Some recipes call for additional spices like ginger or cinnamon and black pepper for a kick, occasionally a little honey for sweetness. Last year, La Marzocco’s visiting café—unsurprisingly from LA—made iced or hot turmeric lattes with house-made almond macadamia milk. Now, though, you’ll have to head locally to Juicebox for the golden milk, which uses clove, orange peel, cinnamon and black pepper to complement the turmeric and hemp milk. The Capitol Hill juice bar also has a turmeric green juice and a turmeric gold juice sweetened with yam, carrot and orange.

Another turmeric-y beverage option has popped up at Rachel’s Ginger Beer, where the “new year, new you” flavor blends that signature ginger beer with turmeric, tangerine and carrot. It’s on tap at both Seattle locations, and you can add alcohol to counteract the health benefits and keep it fun.

Prefer your turmeric as dessert? New Capitol Hill plant-based ice creamery Frankie & Jo’s (coincidentally, Juicebox owner Kari Brunson is a partner here as well) is serving a gingered golden milk ice cream that’s a delightful yellow; try it in a gluten-free waffle cone. Theo Chocolate has jumped on the bandwagon, too. They recently launched a series of snackable clusters—with something called cocoa flavanols that promise a healthy heart—and one of the flavors is coconut turmeric.

These new, trendy tastes all lean towards sweet, but the traditional way to gain turmeric’s benefits is through savory Asian curries and flavorful soups. Stop by vegetarian Southeast Asian restaurant Jhanjay—locations in both Ballard and Wallingford—and try the turmeric coconut noodle soup or turmeric fried rice.