Experience the Benefits of Bone Broth 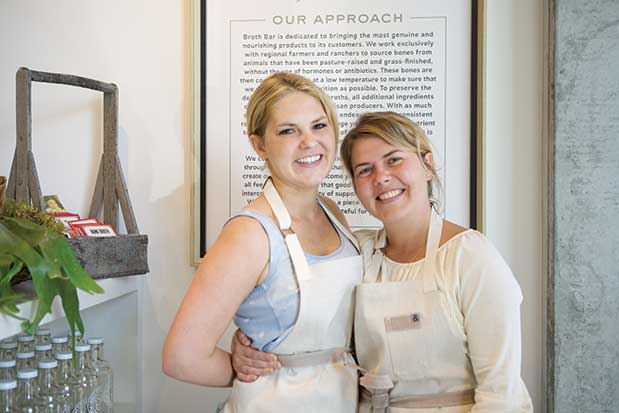 An interest in nutrition and healing through food led Tressa Yellig to her love of bone broth—one of the year’s buzziest food trends—which she extols as being “really powerful medicine” because of its high concentration of nutrients. A traditional food (one that has been consumed for centuries), bone broth is also known simply as stock, bouillon or broth, although they are not all exactly the same. “The biggest difference between them all is [that] the original intention of bone broth is not to be a flavor base, but to be a food supplement.”

Sourcing from local, organic farmers, Yellig and her sister, Katie Yellig, opened a second outpost of their popular Portland café. The menus at both are based around the liquid. The Broth Bar by Salt Fire & Time was scheduled to open in the new 222 Market Place food hall in Olympia (222 Capitol Way N; brothbarsft.com) in September.

Yellig’s current favorite is the Combination No. 1 with bison broth (one of the more exotic broths available on their menu). Bison broth tastes like a mild beef broth and is not gamey at all. (Yellig sources her bison bones from regional farms.) Yellig adds fats and antioxidants to this broth, which she says increases both the flavor and health benefits. Ghee, coconut butter, black cumin seed oil, fresh turmeric and black garlic salt give the soup earthiness and a bit of kick. The turmeric and black cumin seed oil have anti-inflammatory properties, and omega-3 fatty acids from the fats aid in absorbing proteins. “I always think of [this bowl] as a hug for your nervous system,” says Yellig.

To each broth bowl (broth-base choices include chicken, beef, pork and more exotic options, such as bison and lamb), diners can add egg, confit chicken heart, braised beef tongue, fresh ginger juice or any number of other healthful and delicious combinations that have been created by the sisters. “What I love about traditional foods is that … you immediately feel the [benefit] of what you ate.”

Why this dish? Yellig is ardent about introducing traditional foods back into the mainstream. “Bone broth is the most simple and most complex of things for healing, and it has such a long history in functional medicine,” says Yellig, referring to medicine that addresses the underlying cause of disease.

» Key nutrients: “It’s two things really—the gelatin and the minerals,” says Yellig. Both are released when the bones are simmered in water. Gelatin supports skin and digestive health, while minerals protect against aging and disease.

» TIPS FROM THE PROS: Bones are submerged in water to which a small spoonful of vinegar has been added. Vinegar helps to draw out the minerals. The bones are simmered at a low temperature for 72 hours in order to collect as much gelatin and nutrition as possible. “We also add a small amount of carrot, onion and bay leaf to the water” for flavor, Yellig says.

Broth recipe
Source local bones, preferably from pasture-raised animals. A variety of carcasses can be found at any of Seattle’s area farmers markets. This recipe calls for the bone broth to simmer on the stovetop for several days, but you can also use a slow cooker.

5  pounds pasture-raised animal
bones or 2 chicken carcasses
(use a mix of different kinds of
bones)
Purified water to cover bones
(approximately 1 quart of water
for every 1 pound of mixed
bones)
2  carrots
1  onion, quartered (you can leave
the skin on)
2  bay leaves
Splash of vinegar (cider, red or
white wine, rice) or lemon juice

» Place the bones (knuckle, marrow, blade, etc.) in a medium, heavy-bottomed stock pot and add water to cover.
» Mix in the splash of vinegar and allow to sit at room temperature for 1 hour. (If there is a bunch of meat on the bones, roast them first for flavor at 450 degrees Fahrenheit for about 20 minutes.)
» Bring the pot with water and bones to a gentle simmer (about 180 degrees F) and continue to simmer for 8–72 hours.
» Add the vegetables about 1 hour before the end of your cooking time.
» Strain out the bones, vegetables and herbs, and allow to cool. Package as desired.

To make the Combination No. 1
(Yellig’s favorite), add, to a bowl of hot bone broth: