A Field Guide to Salmon 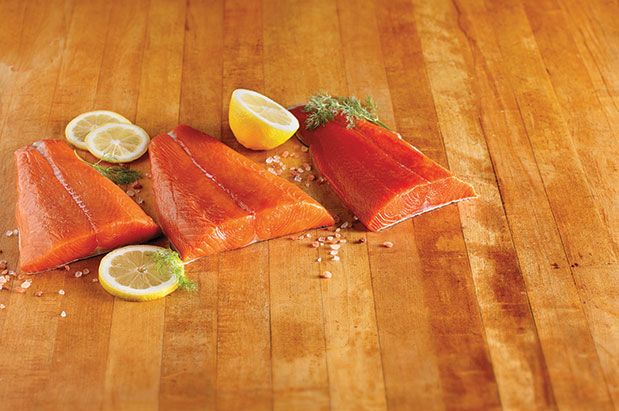 If Seattle had a fish mascot, it would be salmon. We catch it, grill it, cure it and love the fishers to the north who bring it to market. Even though Alaska is home to 95 percent of the country’s wild salmon, most of us still don’t know our coho from our king. Each of the five species of Pacific salmon are prized for different reasons, from color to oil content.

Here’s a brief primer on the fresh salmon spectrum.

Coho
(also known as silver)
A leaner version of king salmon, coho is the second-largest fish (12 pounds on average) on the salmon spectrum and the most versatile in preparation.
Look/taste: Orange-red flesh, delicate flavor
Season: July–November
How we like it: Broiled, roasted, poached—it’s all good
Price per pound (fillet): $10–$17

King
(also known as Chinook)
The largest (about 20 pounds) and earliest salmon of the season, king salmon also has the highest content of beneficial omega-3 fatty acids and is thus the most prized of the species. It will melt in your mouth, especially when it’s a fish harvested from the
Copper River.
Look/taste: Red flesh, rich flavor, firm texture
Season: Harvested all year, but first shows up in April
How we like it: Grilled with salt and pepper and a little lemon
Price per pound (fillet): $16–$35

Sockeye
Considered to be the second run of the season, sockeye is also regarded as a prized species because of its deep red color, moderate price (less than king, anyway) and versatile preparation potential.
Look/taste: In addition to color, it has robust flavor and firmness, especially those fish harvested from the famous Copper River or the Yukon River.
Season: July–October
How we like it: Every way—sautéed, steamed or grilled
Price per pound (fillet): $8–$13

Pink
The smallest (about 2–6 pounds) and most abundant of the species, pink salmon is the type you’re most likely to find canned or in a salmon burger, because of its tender texture.
Look/taste: Light, rosy pink; texture similar to trout
Season: June–September
How we like it: As a salad tossed with fresh herbs, lemon juice and a little mayo
Price per pound (fillet): $4

Keta
(also known as chum or silverbrite)
A popular lower-cost option, keta is small, mild in flavor and therefore loves a good marinade. Its size makes keta a good choice for whole fish preparation and in stews. Its plump orange roe is that which tops sushi rolls.
Look/taste: Orange-pink flesh, mild flavor
Season: June–September
How we like it: Smoked; headed, gutted, stuffed with herbs and roasted in the oven
Price per pound: $4

SHOP LIKE A LOCAL
When purchasing salmon, it’s always cheaper to buy the whole fish and have your fishmonger fillet it for you.

Go back to the main Seafood in Seattle article.