A Korean restaurant in Pioneer Square is among the first in the U.S. to brew its own makgeolli 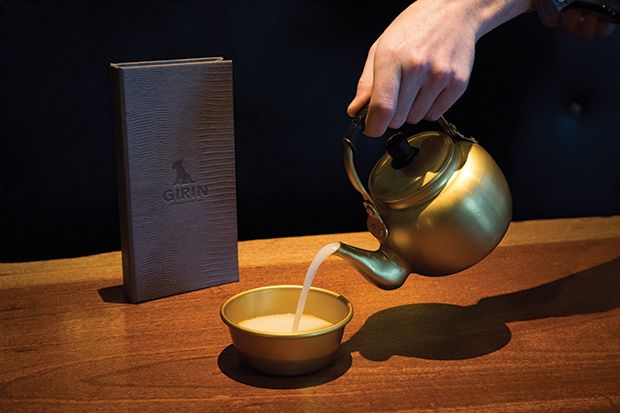 Girin, that refined Korean steak house in Pioneer Square, has two years under its belt. However, the story of how its owners came to know about—and now, to brew their own—makgeolli, a traditional Korean sake-like beverage, started at about the same time they were researching menu inspirations around Seoul in early 2014, long before Girin first opened its doors.

Makgeolli is a rice-based alcoholic beverage that goes through the same simultaneous double fermentation process as Japanese sake, meaning the conversions of starch to sugar and sugar to alcohol occur at the same time, instead of in isolated stages as they do in the making of beer and wine. It is unfiltered—giving it a milky, cloudy appearance—and delicately sweet, though the fermentation lends a probiotic tang, similar to that of yogurt, and a light fizz. At 6.5–14 percent alcohol by volume (ABV), makgeolli is less alcoholic than soju, Korea’s more popular spirit. As Korea’s oldest liquor, makgeolli fell out of favor in the ’80s, hanging on only among the rural farming class and the elderly—who praise it for its kombucha-like medicinal properties. But in the past 10 years, makgeolli has experienced a resurgence in Seoul, where hip little bars have started brewing their own and targeting a younger audience.

It was among these bars that Girin co-owner Cody Burns (also co-owner of Momiji and Umi Sake House) first tasted and fell in love with real, living makgeolli—a world apart from the pasteurized imports he’d encountered as a sake connoisseur here in the U.S. After about two years of recipe testing and liquor board paperwork, Girin debuted its first makgeolli last November, offering two versions. Both are from a basic recipe called danyangju, with the same flavors of toasted rice and bright fruit: The Lunar Brew is diluted a bit (6.5–8.5 percent ABV), and Samjoko is the heartier of the two (12–14 percent ABV), with more concentrated flavors. Both stand up well to the restaurant’s menu, which features dishes with assertive flavors and spices; they act as a kind of palate cleanser to a sea of kimchi. Girin’s bartenders are even using makgeolli in a cocktail or two, though I prefer it straight from the shallow golden bowls it’s served in. Pioneer Square, 501 Stadium Place S; 206.257.4259; girinseattle.com